The next exercise was to find the "rhythm lines" in the human body, specifically looking for "S-curves." Our model was a young ballet dancer, Heidi, and although she was cute, poised, and drawable, she was also 10 or 11, not really old enough to have developed too many rhythm lines in comparison with an adult ballerina. So I decided to take on a greater challenge and draw a dancer whose photo I had saved from a shoot in the streets of New York City.

Halfway through this, I deeply regretted doing it in my sketchbook instead of on watercolor paper, because I just couldn't get the level or subtlety of shading I needed on the thinner paper. I also went too purple with the asphalt as a background, so the dancer doesn't stand out as much as she could/should have. There's lots wrong with this, but it definitely was a great exercise in rhythm lines and s-curves. The muscles, the grace, the expression, were all a privilege to attempt to mimic. 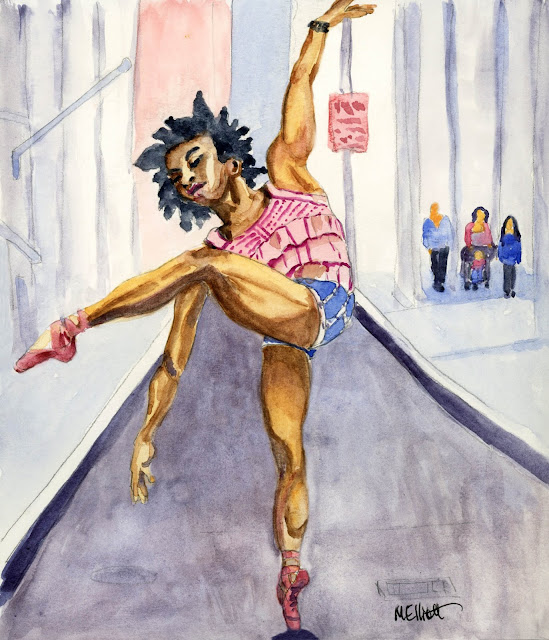 #30Faces30Days — "Dancer"
Pencil/eraser and watercolor in Bee sketchbook
Posted by Meligelliott at 7:47 PM No comments:

An exercise in spasticity

Exercise #16 was to "get a looser and more varied line weight" by drawing today's model, David, with his cup of tea, with your non-dominant hand. In other words, if you're a righty, draw with your left, and vice versa.

There was absolutely nothing loose about this process. Spasticity was the word, as in, "a condition in which certain muscles are continuously contracted. This contraction causes stiffness or tightness of the muscles and can interfere with normal movement, speech and gait." By the end, I thought my hand would refuse to let go of the pen.

Drawing with my left hand was an alternation between careful though slightly tremulous lines, and wild random strokes resulting from the deathlike grip sending my hand into jerky noncooperation. I also kept having this intermittent compulsion to reach over with my right hand and snatch the pen out of my left!

I managed to get something of a likeness of David; and his one hand holding the teacup looks almost like what you would expect, but the other, supposedly holding a saucer, disintegrated into parts that never summed up into a whole.

After my experience with the drawing, I decided that watercoloring with my left hand was going to prove too much for me today and stopped with the Uniball impression.

Perhaps venturing into non-dominant drawing occasionally is good for keeping the brain elastic; but for making a pleasing drawing, not so much. 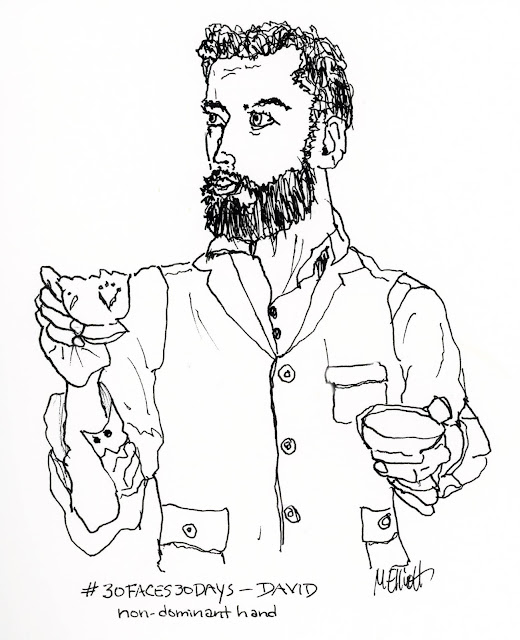 
Posted by Meligelliott at 4:43 PM No comments:

This is Model #15, and his name, innocuously enough, is Rick. He has the tragic face of a 16th century saint...or else perhaps someone who should be named Mulazim, which has the meaning "tenacious, persisting" in Arabic, because his face is so sorrowful, he must have endured much.

Whatever his name or story, he was the perfect model for the day's exercise, which was creating contrast with warm and cool colors. The teacher encouraged us to exaggerate those qualities by picking complementary colors, and Rick's face was such a canvas of bruises with his concerned gaze and the deep shadows both over and under his eyes that I couldn't resist giving him a bit more of a lime green cast than was probably warranted, and using the complementary purple to full effect.

Even so, I didn't quite capture the devastation in his gaze. But here is my best effort. 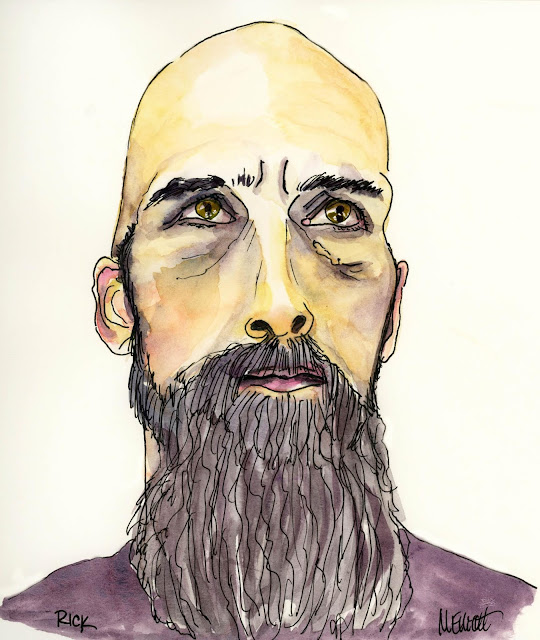 Posted by Meligelliott at 12:52 PM No comments:

Yes, I'm running behind. This is the model for Day 14, and I missed out Day 11 as well as 15 and 16. I will probably catch up at some point, but I have a couple of deadlines tomorrow and more next week that are interfering with sketch time.

This was, once again, an exercise that people were supposed to do using ballpoint pens. Although some people love the practice and excel at it, I can think of nothing more tedious than using three to five colors of pens to do crosshatch shading until it gets to the right levels, so I once again did my face using watercolor.

I did, however, take the lesson itself into account. The model, Nabila, had an extraordinarily white skin, but with prominent cheekbones and facial features that cried out for accentuation (which is where all that cross-hatching was supposed to come in). So I left large parts of her face the white of the paper, then took my reliable Naples Yellow from Daniel Smith and went in on both the slightly shaded and the heavily shaded parts. After that dried, I went back with several roses and a purple to finish off the contouring, and then filled in the eyes and hair with a deep color mixed from burnt umber and ultramarine.

I think I caught a good likeness; but I think I also fulfilled the assignment to the best of my ability, given the different materials involved. Perhaps, at some point in this 30-day process when I am not so rushed, I will actually try some different media, but for now I am happy painting portraits and learning something from each painting, even if it isn't media-related. 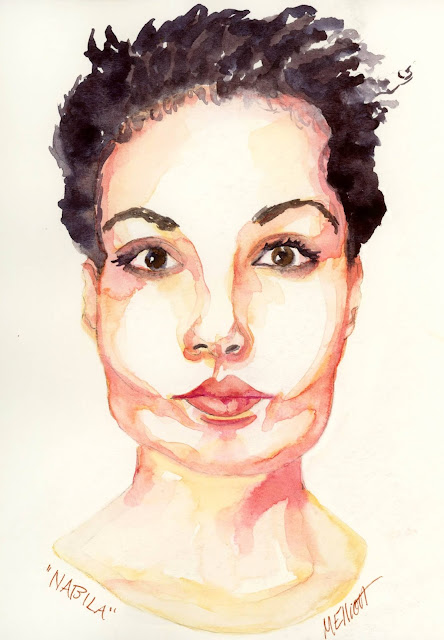 Posted by Meligelliott at 3:14 PM No comments:

Today's lesson was "marking off your proportions," which simply means taking a pencil and putting in lines where the eyebrows, eyes, nose, mouth, and chin fall on the face, also paying attention to such things as angles.

It sounds like sensible advice, but I tend to resist it because I'm so used to drawing with pen, so that the minute I start to draw, I'm committed. But I decided to give it a shot, and by the time I had marked in the locations of everything it seemed like I was half-done drawing the face in pencil, so I just went ahead and stuck with that.

It makes for a more realistic painting, and it definitely helped me with the likeness (especially getting the location/length of the nose right in proportion to the rest of the face), though I'm not sure it's as interesting or individual as one done in pen. I also could have used some help with the shape of the glasses, unless she has dropped and bent these a few times! 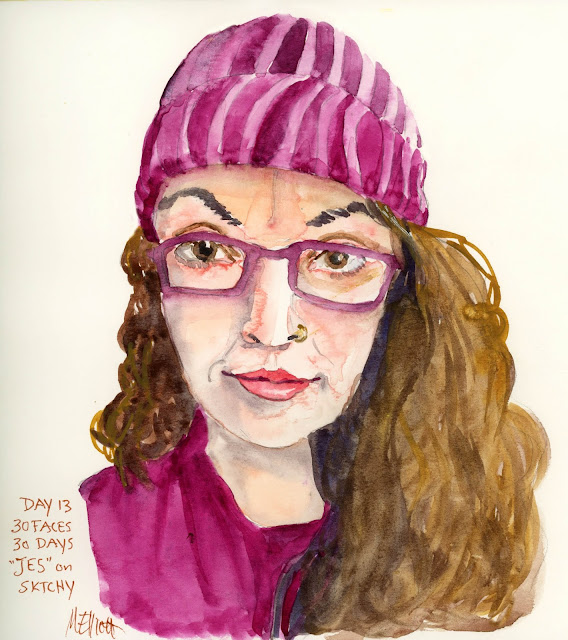 
Posted by Meligelliott at 12:18 AM No comments:

Today's exercise was teeth, and the teacher gave advice that was directly contrary to most I have received about teeth: Paint them exactly as they look. Many/most people say, just suggest them, tone them down, make them all one block with just the hint of divisions, only paint the surrounding gums, but above all, minimize! But this teacher said paint them like you see 'em.

The only problem with that is, if you miscalculate even slightly, say, by making one too long and the next too short, or one too square and another too pointy, they can rapidly assume the aspect of caricature.

Regarding today's portrait, let me just say that I hope today's model, the lovely Lauren, doesn't discover herself on my blog, because she won't want to pose for Sktchy again. She's a pretty girl with a lovely smile, not a haggard old flirt with lipstick on her teeth. Oh, well, practice makes perfect. 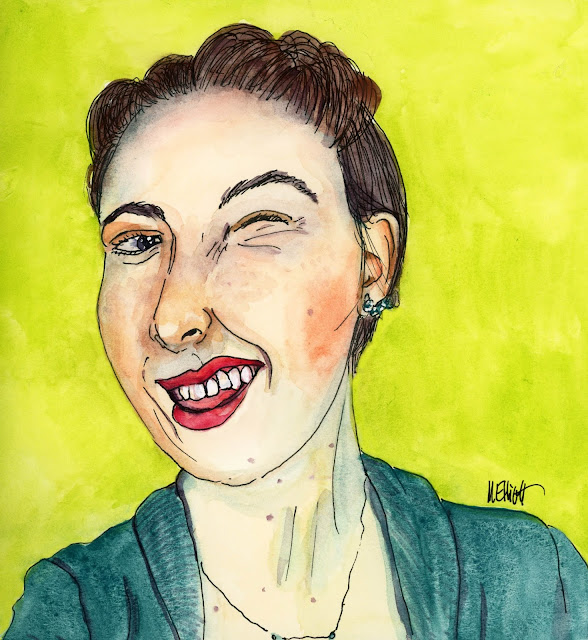 This was a good exercise in perceiving something not so readily apparent. When you think about "drawing the negative space," you usually assume that the space in question will have some bulk or color to it, so that you can look at it,  fill it in, and have your image revealed from inside it. Maybe that explanation isn't clear, so let me give an example.

This is a picture I painted last year during the 30x30 Direct Watercolor challenge. For that challenge, you weren't allowed to draw in pencil or in pen, you were only allowed to go directly to paper with paint. I picked a photograph of my friend Susan's dog, Mouse, who is primarily a white dog, and I painted the entire background around Mouse to pull her image out of the paper, only afterwards going in to add the details of face, freckles, etc. Here is my painting: 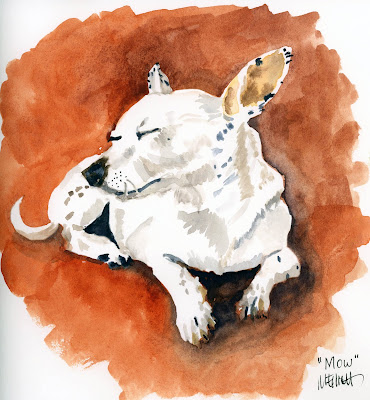 In other words, everything rust-colored on the page was painted first, around the bulk that was Mouse.

In today's challenge, however, we were to draw the negative space when that space was white. So if you were going to draw a portrait in the conventional way, you would look at your model and draw the outline of the hair, face, body, etc., looking specifically at those things for your cues. But when drawing the negative space, you look instead at the background, and draw a line that encompasses that background, which in turn isolates your individual (or in this case individuals).

I drew this one in pencil, and stopped to scan it, simply so I could show the difference (it's subtle but it's there) in drawing the background instead of drawing the foreground. It's like a contour drawing in reverse. 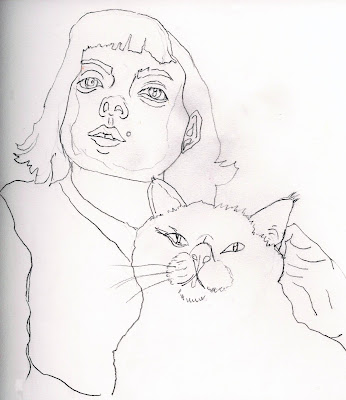 Once past the drawing stage, I painted this as I would anything else, but it definitely gave me a sense of what was foreground and what was background. I also cry foul on Sktchy for today, because this was definitely TWO portraits in one, and took at least twice the time to finish! And I'm still a day behind... 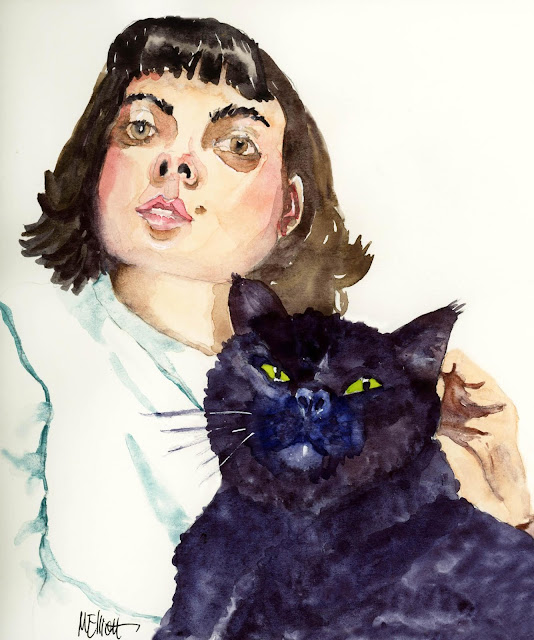 
Posted by Meligelliott at 3:48 PM No comments: