I've been watching a tutorial for Urban Sketching on Sketchbook Skool, and this week's instructor is Liz Steel. While the tutorial is about sketching in situ out in the world, and while Liz is an architect, so you would think her focus would be on buildings, she has a mini obsession, which is taking daily tea and sketching the teacup, whether her own or belonging to whichever tea shop she habituates. 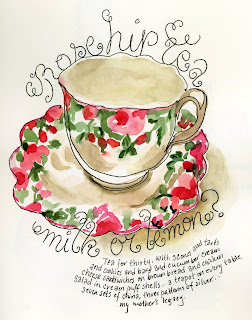 (Here's one I painted a few years back, inspired by one of my mom's collection and remembering the "tea for 30" parties she used to host.)

I always wonder about people who sketch their food and drink, because they do a beautiful job of both the drawing and the painting, but all I can think about is, Aren't those fried eggs getting rubbery? Isn't that toast stone cold and soggy by the time you eat it? I still haven't had that question answered, but I did get a glimpse into Liz's process: She pours the first cup of tea, quickly does her base drawing (including the tea at the proper level in the cup), then drinks the tea down. She finishes her drawing, pours a second cup of tea, paints the tea first to get the right level and shade, and then drinks the tea as she goes along with painting the rest of the cup. And when she's finished, she pours a third cup and enjoys it while the paint dries so she can close her sketchbook.

It was about lunchtime when I finished this part of the tutorial. Yesterday, at the market, I stopped in the beans and soup aisle to get some small red beans for tonight's dinner; and while there, I gave in to nostalgia and bought two packets of soy-sauce-flavored Top Ramen, 88 cents for two. My ex-husband and I lived on that stuff the first couple of years we were married and on a budget, and I don't think I've had it since. So today, I cooked up a packet in two cups of boiling water. 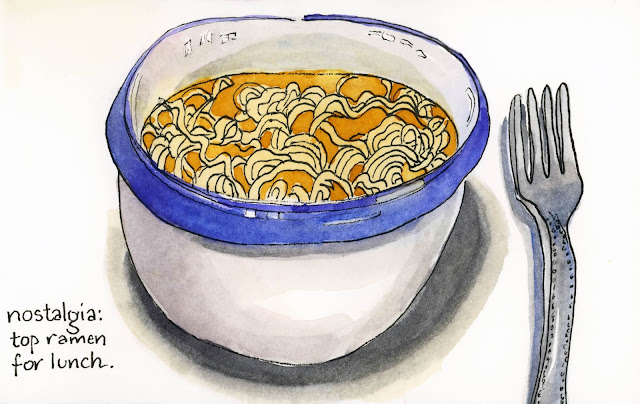 It was, however, going to be too hot to eat for about 10 minutes, so I grabbed my sketchbook and pen and made a quick drawing; then I ate the sufficiently cooled-off ramen, careful to leave a few mouthfuls at the bottom of the bowl so I could mix just the right colors, and then I painted it. Not quite as elegant as Liz's teacups, but yummy, and fun to immortalize.

These are a few sketches I made recently, two last week, one today. I'm trying to pull out my sketchbook, instead of my novel, when I'm in a situation where I have to wait for something.

These first two are at UCLA, and are fast, continuous-line sketches, necessary to catch students at breakfast before they moved or left. I'm still enjoying the way continuous-line makes you consider how to capture the main shapes without getting lost in the details. 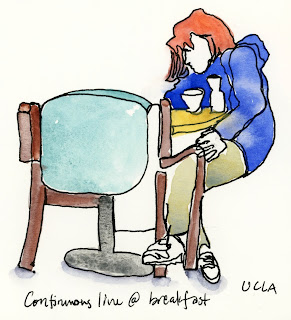 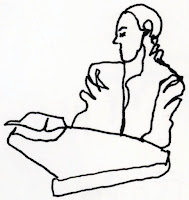 This one I did at the car dealership today while waiting for an oil change. I thought it would be a more extensive servicing, since I've been driving my "new" Jeep Renegade for almost 7,000 miles now, but aside from some top-up of liquids, it was nothing more than oil and filter. So this drawing was smaller and less inclusive of the general view than I had planned when I sat down, but I still feel like I captured a moment. I was sitting in the waiting area, back behind the main floor and at an angle to the receptionist's desk. I loved that directly behind this rather mundane set-up of a desk with all the electronics necessary to her job, you could see a lime green Rubicon parked in the room. So I painted the things that were interesting—the girl, the Jeep—and left the many many office machines as caricatures. 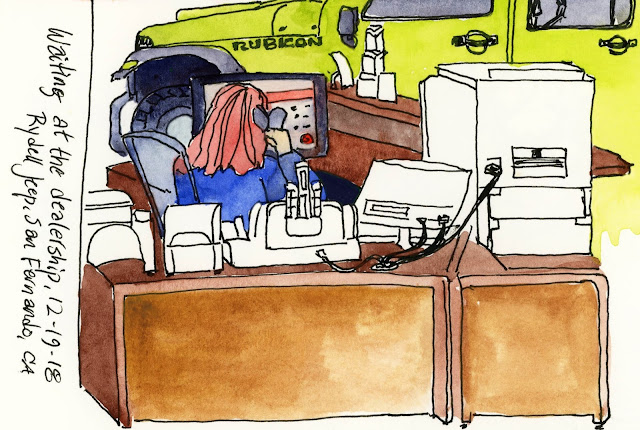 Posted by Melliott at 8:43 PM No comments: