No, I'm not insulting someone, I'm talking about THE dummy, which is to say, a mock-up for a book. When you make a book, you first have to figure out how many pages you need (title page, verso page, colophon? Start your story on the left-hand page or on the right? Acknowledgments at the front or the back? etc.), how much artwork there will be (different for a picture book than a chapter book, which this one will be), where it will fall in the book, where the type will go in relation to it,  whether the type will FIT with all the artwork you have envisioned and, if not, whether you would prefer to cut the story or cut the artwork or make the book bigger (a cost consideration for the publisher, so you don't want to go hog-wild)...

So that's what we've been working on (loosely) in my illustration class last week and this. This week we were asked to bring some color artwork, maybe incorporating some type, so I tried a layout. I don't think it's going to work, because after seeing the mess the printers and/or binders can make of things that travel across the fold, I don't want to go there; but I did like the idea, so I tried it out anyway. It's not exactly how I envisioned it (when is it ever), but it's a good start towards thinking about all of these problems and how to solve them.

The Adventures of Beatrice, Part One: The Quest for a Roof 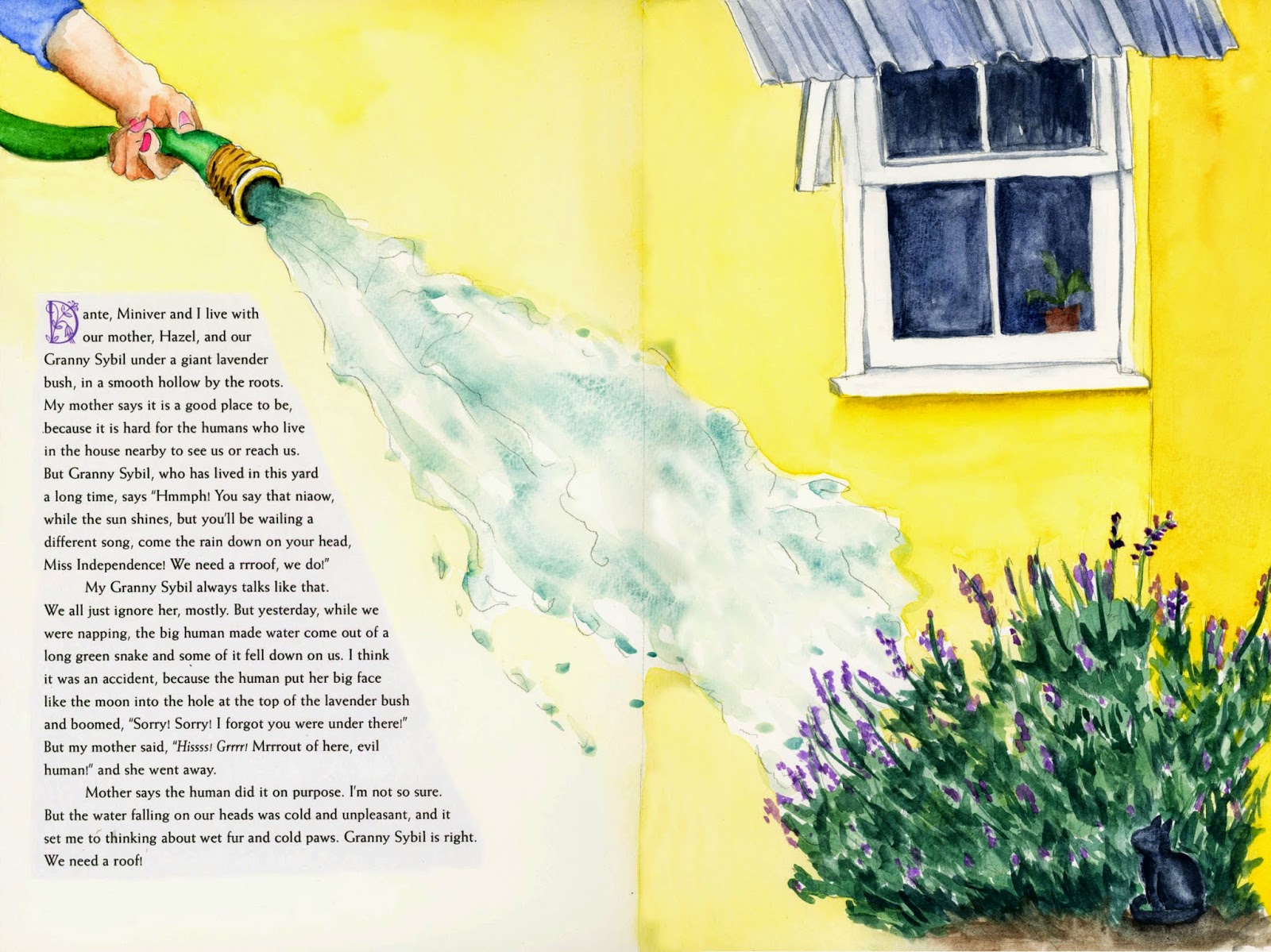 I had to scan this in two parts and then stick them together in Photoshop, because the art was too big to fit on my scanner, so the line (in pencil) is the actual center fold and I tried to eliminate the overlap line with my Clone Stamp Tool (somewhat noticeable, but better than it was). And of course, the type was set separately and placed on the background, which is why the color is interrupted behind it. That would be continuous graduated color in the book.

Given all the things to think about: the probable necessity of rewriting your book and redoing all your artwork half a dozen times (or more) until it's right; sending it to a publisher or eight and being lucky enough to get picked up; fulfilling all of your editor's expectations (which will probably mean another batch of alterations); how long it takes to get the whole thing typeset and color corrected and assembled and printed; waiting to see if it's successful, which is the turning point upon which your future career will rest…given all that, I'm amazed at the number of successful children's book authors and illustrators in the world! You really do have to be a persistent person who will keep plugging away, who won't give up, who will stick to your vision and refuse to be told you're banging your head against a brick wall…and you have to be willing to do that knowing that there is no immediate gratification (it's sometimes a year or more after you turn in your manuscript that your book is released, and meanwhile you better have moved on to your next project!) and that it's not exactly a lucrative profession!

Given all of that, I'm not sure I have what it takes. But I'm going to take it edit by edit and painting by painting and page by page, and see where I end up. I don't know when that will be…it may end up being career number…four, is it? after I retire from the library…but at least I'm beginning the process. And that's thanks to Deborah Nourse Lattimore, who IS one of those persistent visionaries, and who inspires us all weekly to do better. I'm so honored to be studying with her.