Today's "capture" was about expressive line.  I wasn't sure, though, that the instructor herself got the concept, because after talking about letting lines express energy rather than trying to capture a likeness, and allowing them to follow emotion and "wander off," she painstakingly drew a near-perfect likeness of our model, Ron, in pencil, before inking over him in pen, so it seemed like her lines were pretty well controlled.

I opted to leave out the pencil sketch and go straight to ink. I also ended up drawing Ron twice, because I wasn't happy with the first iteration; but I still felt good that I had focused on the pen line to accomplish the drawing. And his hair certainly left a lot of room to be expressive!

I was going to do this as a literal portrait, but Ron's colors were delicate, and I chose instead to simply focus on where shadows showed on his face. His skin was so pale as to look ghostly, and the shadows on so young a person were merely suggestive. I painted the whole thing just using Daniel Smith Shadow Violet, which has a lovely habit of granulating here and there into a pale turquoise (hopefully just where you want it to). But in the end, I couldn't resist adding some pale apricot color to those luscious lips and some bleach blond to the wild rooster cut of his hair. 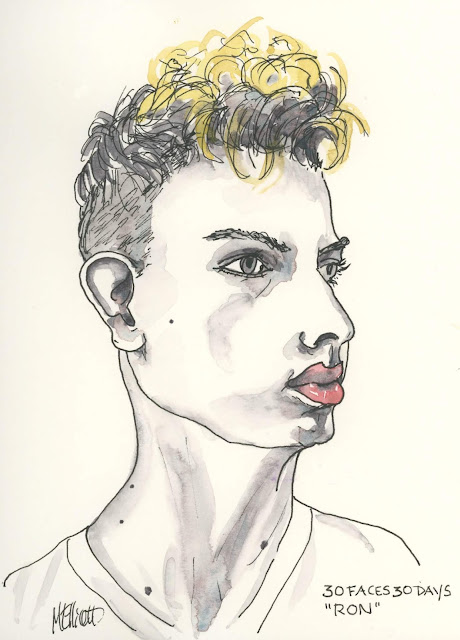 
Posted by Meligelliott at 2:46 PM No comments: