Makerspace: Are You Game?

I have messed with both this illustration and the ingredients for it all day (first spending more than an hour at the 99 Cents store picking up random stuff that might be craftable), and I can't say I'm completely happy with it. I drew it from a sort of overhead, foreshortened view, with the result that the toilet paper roll, glue bottle, and tape look absurdly small to my eye compared with the socket cover and sharpies Although it's correct, it doesn't LOOK correct to me. Also, the pipe cleaners are funky looking, and I'm not crazy about the final layout OR the stuff that I ended up including in the drawing.

But once again, as with the books, I am running out of time. So unless Anarda looks at it and says "Yech!" we will probably go with it. And the idea of the illustration is to intrigue the teens--"What could we possibly make with all those things that don't go together?" so from that standpoint...okay. 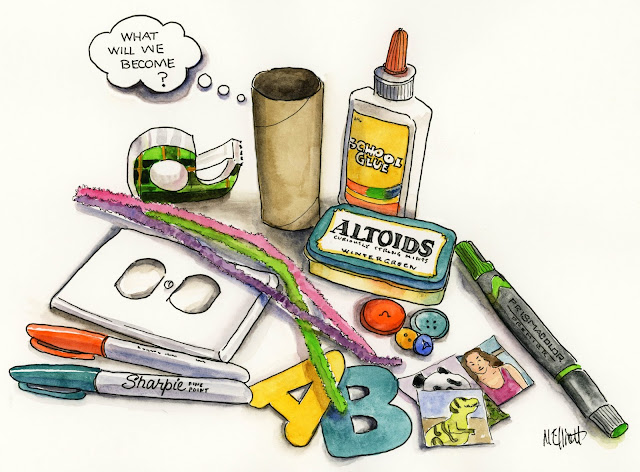 Micron pen and watercolors.
Posted by Melliott at 6:14 PM 1 comment: