Yesterday, I met the Los Angeles Urban Sketchers' group at the Pan Asian Museum in Pasadena. Our entire sketchcrawl was intended to include the decorative courtyard as well as the interior, plus (one short block over) the outward aspect of City Hall; but because it was raining fairly steadily, we instead opted to draw only inside the museum and then walk two blocks to a coffee house.

It was a lovely afternoon; but a physical problem made it a little difficult for me. My lower back tends to lock up when I stand still; walking, it gradually loosens itself and does okay, but standing for long periods just doesn't work. I entered the museum through the gift shop and start wandering through, looking for a display room with a bench. Alas, this museum doesn't seem to believe that people will want to linger long enough to sit, and doesn't feature a single bench in the entire permanent collection. There are benches in the one section dedicated to current displays, but I didn't discover that room until the end of my stay, because it was at the other end of the building.

I found just two rooms where I could sit; one was showing a looping documentary about the making of fine porcelain, and had a few cabinets with examples and exhibits of porcelain to go with the narrative. I stopped there to watch the interesting film from the comfort of a small wooden stool, and stayed to sketch a vase on one of the shelves; but soon after that, a whole flock of museum-goers came in and obviously coveted the stool, in order to enjoy the movie for themselves, so I moved on. 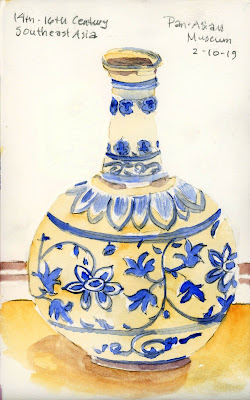 Down the way and across the hall, I came upon a room with a convenient shelf where I could perch, and I hastily drew a pottery camel, before the security guard could show up and shoo me off the ledge (so hastily that I misjudged proportions and had to leave out his feet!). 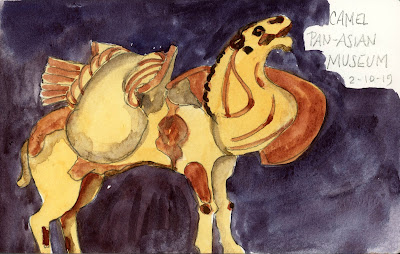 I left there and moved one door down, which turned out to be a combination of demonstration and children's playroom. Around three of the walls were baskets containing various examples of fabrics made by various Asian peoples for the curious to take out and examine; along the fourth was a velvet-covered bench where children and their parents could read books together. In the center of the room the museum had pitched an open-ended tent made from all kinds of colorful fabrics and lined with pillows, in the manner of a seraglio or Ali Baba's lair, beautifully backlit from the light coming through the door behind it. This was so colorful and inviting that I sat down and tried to capture all the details of the many fabrics attached to its framework with magenta ties. 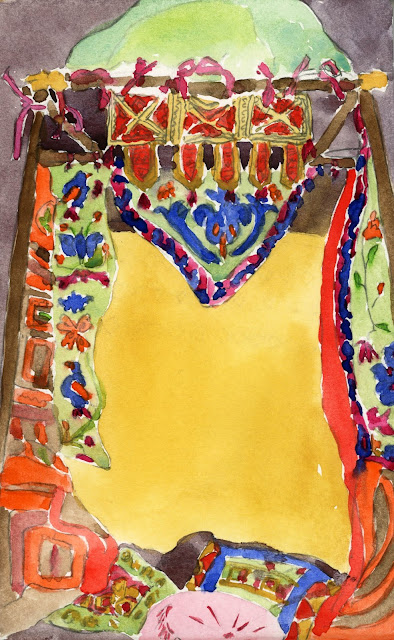 After our sojourn at the museum, we went to our intended coffee place, only to find it jammed with late-afternoon lunchers, so we made our way a couple of blocks down and across the street to Tender Greens, which was blessedly half empty and could accommodate our entire group of 16, umbrellas, sketchpads and all. So we got either lunch or dessert and sat, showed what we accomplished at the museum, did some watercolor, drew our food, and caught up with or got acquainted with each other, depending. I ate half my falafel wrap, and then drew the other half: 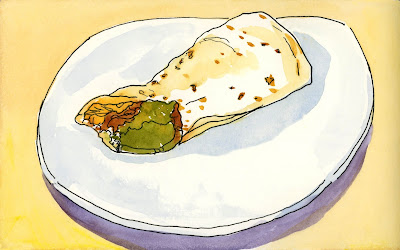 I think I liked this last drawing the best of the day, because I was able to use my pen to draw it with; the museum only allows pencils, so all my other drawings felt a bit pallid to me, used as I am to the pen outline for my contour style of working. I must someday learn to draw more ably with a pencil, utilizing its shading capabilities!

Posted by Melliott at 2:22 PM No comments: