As I have mentioned here before, my cousin Kirsten and I have for some time now been going to breakfast once a month, usually on a Tuesday morning when she is off and I don't go in to work until noon, and we have been trying out a different restaurant almost every time. Some have been great successes, and others have been forgettable. For my birthday breakfast today, I decided we would revisit one that I like better than she does, although I think today we were both happy with the result!

We went to Nicola's, an Italian restaurant in the West Valley, on Ventura Blvd. near DeSoto, in a little shopping complex called The French Quarter. I used to go there for dinner all the time, a few years (or a decade?) back, but we didn't discover until fairly recently that they serve breakfast. Today, we went with the intention to share our two breakfasts; both of us prefer savory over sweet, but doesn't everyone get an occasional yen for a pancake or a waffle or a sweet roll? Nicola's has a special treat: French toast. I'm not usually that much of a fan, but theirs is unusual—it comes covered in lemon curd, and with a wonderful French vanilla custard sauce on the side to make it even better. So we ordered an omelet with mozzarella, tomato, and pesto cream sauce, accompanied by red roasted potatoes, and also ordered the French toast, and then went halvesies on all. Breakfast and dessert, and a gourmet cup of coffee—perfection.

I wanted to go sketching afterwards, but I also had a few errands and some other projects for the day, so instead I took a photo of our breakfast spot and made a drawing/painting when I got home. Perhaps I will start a new series, called "Breakfast in the Valley," and document all the unusual or outstanding places we have been. Some of them will lend themselves to this more than others. This one certainly was fun, with its New Orleans-style façade and its variety of colors and textures. 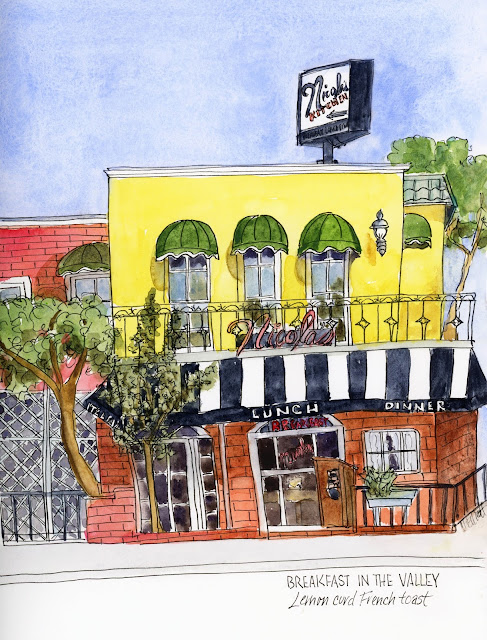 Drawn in Micron pen #5, and then watercolored.

Kirsten and I had breakfast at Corky's in Sherman Oaks last week, so I did this quick sketch of the counter while waiting for her to arrive. I had to finish it up fast, because she hates it when I sketch while she's in the room, so the coffee maker on the right is floating in mid-air instead of sitting on the counter. Oh, well. I liked the guitars and foliage on the guy's shirt. 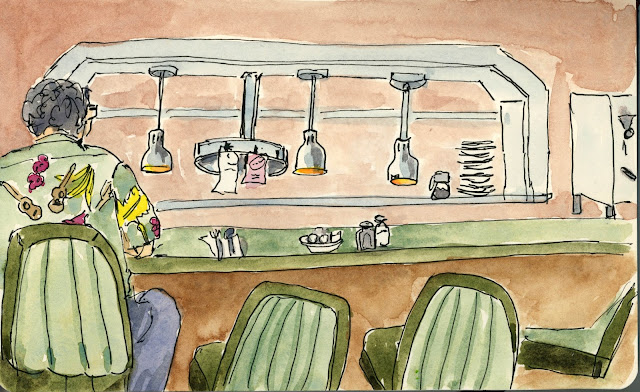 Posted by Melliott at 1:49 PM No comments:

Even though I didn't do these sketches specifically for Inktober, since I did them on the first two days of the month and since they were drawn in ink, I'm calling it good. #inktober2017

Here's a book I was reading; I figured that at some point I would review it for the library blog, so I decided to draw and paint the cover, to go with. 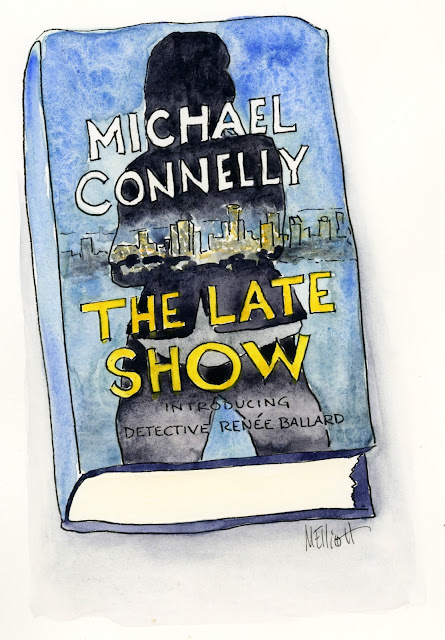 And here are two quickie sketches I made while sitting in on a teen storyboarding workshop at my library. It was put on by Cartoon Network, and they brought five artists (one for each table of five or six teens), so all I really had to do was sit in the room, just in case. So I sketched a couple of tables full of teens while I hung out. I've been trying to do more sketching of humans, because I'm pretty bad at it; you can see from the girls' table that that one girl's head is waaaay bigger than anybody else's, and they also end up with spindly legs and weirdly shaped arms. But I'm working on it. 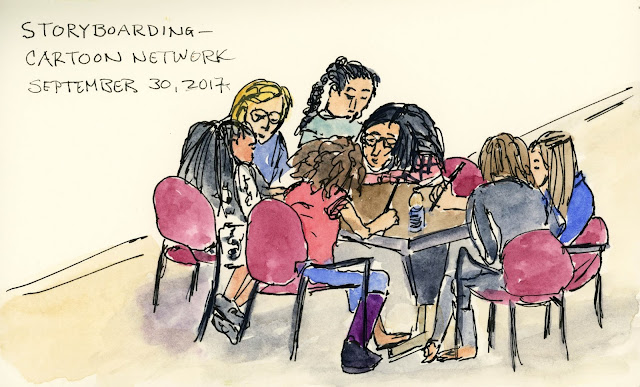 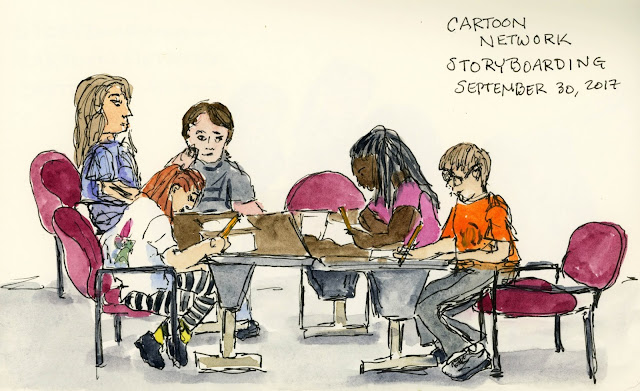 Posted by Melliott at 1:46 PM No comments: