You never know from whence inspiration will come. I met up for breakfast on Sunday with the wonderful artist Colleen Reynolds, who was driving through from San Diego to Carson City, Nevada, where she lives, and impulsively suggested we rendezvous. I had never previously encountered Colleen in person, but we had enough of a basis for friendship on Facebook to make an in-person meeting a delightful continuation, rather than an introduction. It was a great 3+ hours!

One of the things I wanted to ask her, since she is a prolific, professional, award-winning artist with great painterly skills, is how I could start making a transition back to "real" painting from what I do now, which feels more like sketching. I'm contour drawing with a Uniball and then watercoloring, and I love that technique; but it feels a lot more like illustration than fine art, and lately I've been homesick for the days when I was in the art program at Valley College, making an 18x24-inch painting every single week instead of drawing breakfasting UCLA students in my teensy Moleskine.

To my surprise, Colleen said that she admired the fact that I draw "from life," that many fine artists don't have those drawing skills and resort to tracing their under-drawing before making their paintings, and that she thinks I should keep it up! I was immensely flattered by that; but, I told her, I still want to go bigger and bolder. She suggested that I either do just that with the contour, or try doing the contour using pencil rather than pen and then painting it, and seeing how that works out.

So, this week I resolved to start some painting exercises, at the very least. This has been another issue: When you get used to doing only urban sketching, it's easy (on all the days when you stay at home indoors like I do) to get out of the habit of regular drawing and/or painting. Tuesdays are usually a wash (pardon the pun), since I get up at the crack of dawn to drive to UCLA before traffic gets bad, and then exhaust myself with a 2.5-hour lecture and a one-hour book discussion, followed by office hours for my Young Adult Literature class. The inevitable end to Tuesday is late lunch when I finally arrive home around 3:00, usually followed by a nap!

But, today is another day. I had an ambitious plan to take on one of my reference photos I've been saving up to do some more paintings of people reading, and to make it into a "real" (i.e., large and on watercolor paper instead of in a sketchbook) painting; but first, I procrastinated by going on Facebook and poking around to see what people were up to, and a photograph popped out at me from my friend Rae's feed that I just couldn't resist trying to replicate! 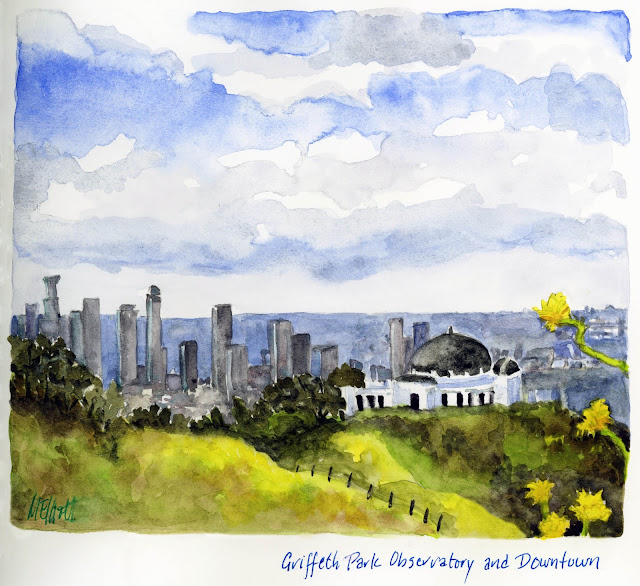 Rae is a hiker, and takes some beautiful shots of the city from unexpected vantage points; here, captured in pencil and watercolor (in my 9x9 Bee multimedia sketchbook) is a birds'-eye view of the Griffith Park Observatory in the foreground, backed up by a panorama of the city and topped off with some beautiful cloud patterns. I hope Rae doesn't object to my appropriating her photo as inspiration; I got so excited when I saw it that I didn't stop to ask! I moved in a bit on the subjects and left out about a third of her photograph, but still managed to let some of the yellow flowers she shot through in the extreme foreground poke up their heads. I'm pretty pleased with this first effort going down a new track!