. . . for the library cookbook! Yes, I have finally done all that I can do. The cookbook must be produced very soon (thankfully not by me), and this is my last illustration. In case you can't tell what it is, it's a quiche! We had, I think, three quiche recipes submitted, so I went with the one with spinach, just to be able to add any other color than yellow/brown or a shade thereof (between crust and egg, there's not much else). I also made the pie pan blue, just for fun. 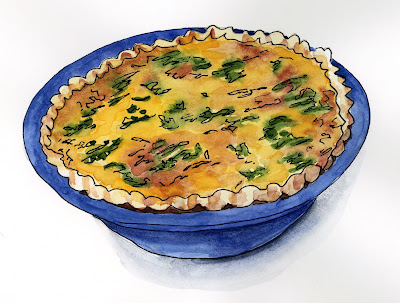 This was a more challenging drawing than some, since the crust and the dish were easy to delineate but the filling was more wet-in-wet and ended up looking like it didn't belong in the same illustration. I compromised by going back in afterwards with some pen squiggles meant to further define the green and brown bits, and I think it's at least recognizable as a quiche?

Honestly, I don't much care--I'm done! I have to admit, though, that this has been a good assignment, because it's given me regular practice, not to mention momentum. I probably won't be posting much art here for the next few weeks, but then (hopefully) I will be posting a LOT of art, because I'm taking a vacation (a proper, 10-day vacation) at the end of September, when I will be going to, drumroll, FRANCE to paint for an entire week in the country!

Between now and then, though, will be many mundane, time-consuming weekend tasks that won't include much painting. Unless I get inspired by something or other. Stay tuned.
Posted by Melliott at 4:59 PM 3 comments:

I arrived home at 7:05 tonight, and decided I would try to knock out a cookbook illustration before it got dark on my patio. Here it is. Simple, quick, just a few colors. But I think it evokes what it's supposed to. To go with my friend Anarda's Watermelon Gazpacho recipe. Which sounds dreadful to me, but she assures me it is choice. For those who are curious, recipe below. Disclaimer: I have not tried it! Personally, I'd rather just pick up that slice and chow down. 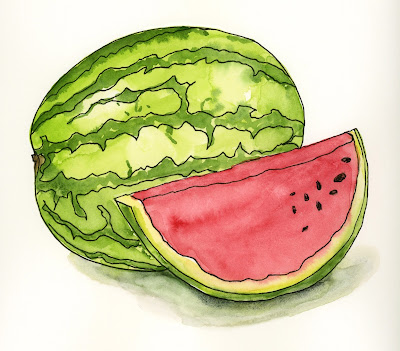 Blend each ingredient with a little salt, olive oil and balsamic vinegar (not too acidic) in a food processor until almost smooth. Please, no lumps of cucumbers or watermelon! Aim for the consistency of salsa. Pour together into a large container. Add more salt, balsamic vinegar and olive oil or specialty oil (almond oil, avocado oil, etc.) to taste.

When served, you can add chopped avocado, radish, onions, chopped nuts, etc., if you want.
Posted by Melliott at 8:53 PM 5 comments:

If you have been looking at these posts regularly, you saw the one with the baking ingredients gone awry (click if you want to see). So today I decided to retry that one, but with some changes. Since I already used the cinnamon in the picture with the molasses for the gingerbread recipe, I reunited the flour (I love that logo!) and vanilla and added chocolate chips, since we have two cookie recipes calling for those in the cookbook.

I sat down to do the painting and thought, "That chocolate chip package is pretty long, better do this landscape instead of portrait." But . . . then I started drawing the flour bag in the dead center of the page! When I got done drawing it and the vanilla, I realized that the huge bag of chocolate chips (they didn't have the small size, so I had to get the economy size at the market instead) wasn't going to fit in the remaining space! So . . . I truncated it--I pushed it farther away from me on the table, put it at an angle, and went for some folds and things to minimize the size. It more or less worked . . . and fit onto my page with about a quarter inch to spare! You only see a few letters of "Toll House" but with Nestlé and the distinctive color of the bag, I think everyone will know what it is! 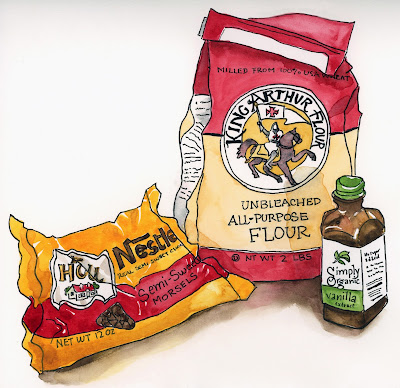 I like the flour bag, but am less pleased with the vanilla than I was the last time I painted it--the lettering went on crooked and (again) since it was in pen, I couldn't do much to fix that. But it's not disturbing enough for another redo. I was much happier with the shadows--I didn't go so crazy trying to replicate every detail but just put in the basics, and I think they work well enough.

I meant to do two more illustrations today, but I just ran out of momentum (and daylight). I'm going to go do something mindless for awhile, and maybe do another one tomorrow night. I only have two to go!
Posted by Melliott at 6:12 PM 2 comments: