Anarda and I and the teens went on our Sketchcrawl around Burbank on Tuesday morning, so here are a few of my drawings…not the best I've ever done, and not quite finished in some instances, but considering I was simultaneously in charge of 22 teenagers and THEIR sketching experience… 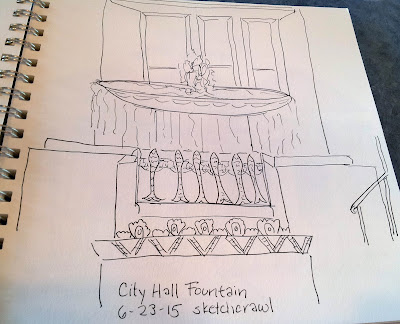 This was a hard one--Anarda commented later that it probably wasn't the best place to start our sketch crawl, but it was first on the route. 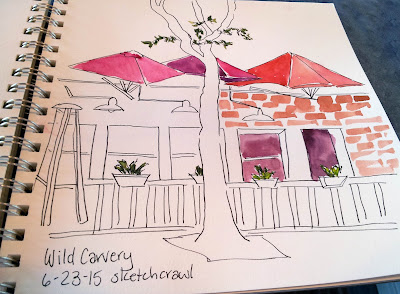 I started doing a color demo for the teens with my teeny tiny Altoids tin palette of colors, but we got moved on by some electrical workers who needed to open up a panel in the sidewalk right under where we were sitting, so I had to finish this one later. 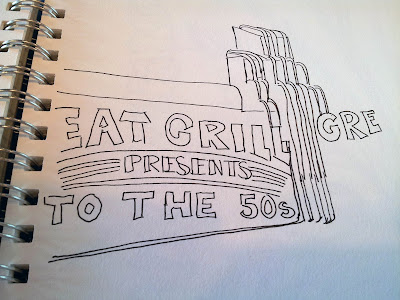 Didn't quite get the scale of this right--wanted to fit the entire marquee into my page. Oh well… 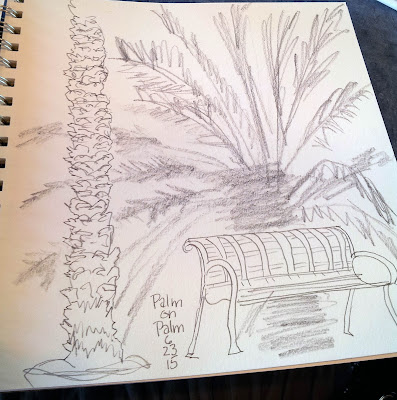 This one wasn't a great likeness, but I was so intrigued by the morning light reproducing the giant shadow of the palm tree on the white wall that I did a (rare for me) pencil sketch. I'd like to paint this sometime and do it justice. I took a reference photo just in case.

I had lunch yesterday afternoon at LEMONADE in Studio City, and came away with a drawing of…Granville. Well, I was on the patio at Lemonade and Granville was directly across the street. Doesn't seem fair that there's no drawing of the place I actually lunched. I guess I'll have to lunch at Granville next time and draw Lemonade!

The tower is kind of tipsy, because I was so focused on the lettering that I drew the tower in segments around it afterwards, but since I was a bit tipsy myself the last time I was at Granville, it seems only fitting. 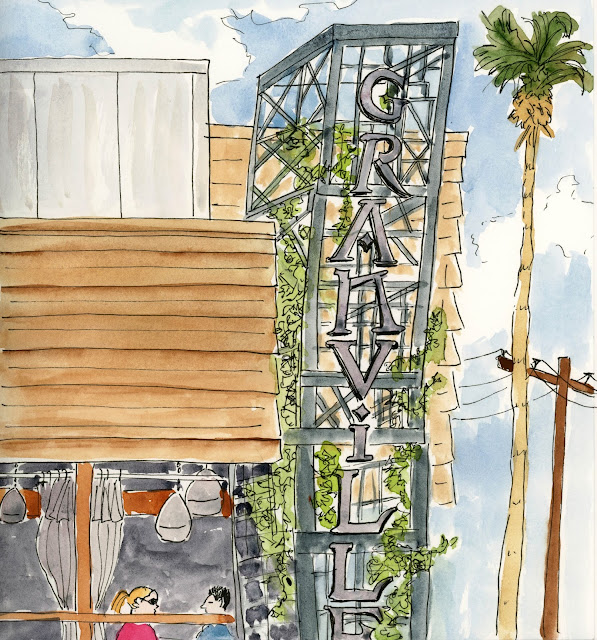 The color palette on the restaurant was kind of boring to paint--all browns, grays, and blacks. Lemonade will be more fun!

And now…back to Every Day in June, before it becomes July! I'll post something later…

If you would like to see some of the kids' drawings from the sketchcrawl, you can go to the library's Facebook page for teens: Burbank Public Library Teen Page.


For EDiJ "Wash," I found a photograph of some laundry hung out on one of those circular washing lines. I've always wanted to have one of those. I don't know why they are so much more alluring than the two poles with lines strung between them that I have in my own back yard--maybe it's because they spin, and the clothes seem like they can enjoy a carousel ride while drying.

Anyway, I was going to do the usual for the Every Day in June challenge, which was to draw the scene as accurately as possible with my pen, and then watercolor it. But I have lately found myself becoming bored by that routine. I'm not a big fan of drawing, first of all--I'm all about the painting--so I get impatient sometimes and short-change the drawing in order to jump into the COLOR. So this time I decided I'd go backwards and do the exact opposite. Some Facebook artist friends work that way, and I have thought of trying it myself.

I went to the art store yesterday to pick up some supplies for an event at work, and indulged myself with some Micron pens in colors--blue, red, sepia. So I decided to paint this "freehand" first, in basic blocks of color, and then go back in with the pens to define the details and have a little fun.

Painting without drawing first made me have to pay more attention to the negative space, particularly the whites. Since the clotheslines are white, I had to paint around them with the green background or the colors of the clothes. I wasn't too successful in some instances, but I figured the pen would save all, afterwards.

So here is the rough painting… 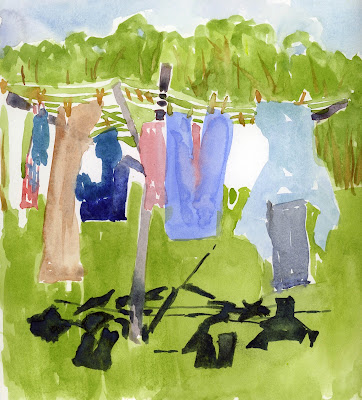 And here it is after the addition of the pen detailing. 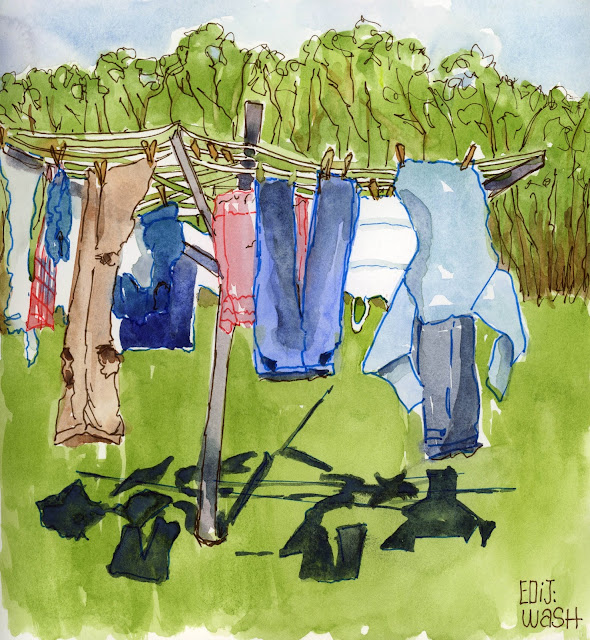 Conclusion? I don't think I have the knack of this yet--some parts are overworked while others aren't detailed enough--but it could be something fun to play with until I do!