At the library, Anarda and I just hosted a "Mad Tea Party" for the teens, with special guest Frank Beddor. Frank wrote the trilogy called The Looking Glass Wars, which is a retelling of Alice in Wonderland, and then branched out with some artists and wrote the Hatter M graphic novels (there are five so far, I think). In preparation for this party, we read not one but two retellings, one (Frank's) with the 6+7 Book Club, and the other (Splintered, by A. G. Howard) with the 8+9 Book Club, hoping the novels would spike interest in attending the event. It apparently worked, because we had 50 kids show up, about 20 of them in costume.

I say all this to explain why the Mad Hatter was on my mind when I went to make a birthday card for Anarda! We (Anarda, some of her friends, her mama and her husband) were all going out to a celebratory dinner tonight, and I needed a card to go with my gift, which was an appropriately themed teapot with matching sugar and creamer set.

He's not quite as mysterious and dark as I wanted him to be (I waited until the last minute, as usual, and he was barely dry before I stuffed him into her birthday bag), but he's a good start. Maybe I'll give it another try, with more leisure. Or, maybe I'll do a completely different character! I wasn't wild about the story line in the Howard book, but the descriptions were luminous -- well worth trying to illustrate. 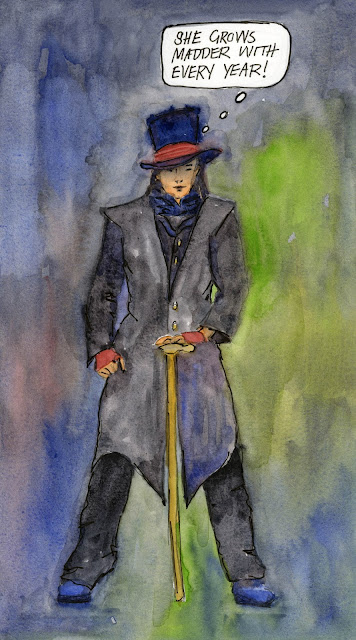 By the way, the punch line on the inside read "That's why we like her so much!" (in case you thought I was dissing my buddy)

I've given up on the Every Day in February challenge, mostly because I didn't want to "go" to most of the places on my list. I'm sure that Laos and Kenya and Russia are beautiful, interesting places with a lot to offer a painter, but I've never had a single impulse to go to any of them. I guess, underneath it all, I'm just a European to my core, because the places I yearn for are France, Italy, Spain, Greece, anywhere in the British Isles...so I decided I'd do a little traveling on my own instead, and looked through my computer folder of reference photos I've saved over the years--some I took myself, others that I found online.

Some people think it's unethical to paint from the photos of others (and in fact there is a website called "Paint My Photo," on which people give explicit permission for you to use their photos as references in that way), but for the most part the drawings and paintings I make only use the photos as a jumping-off point and turn out so differently that probably the photographer him- or herself wouldn't recognize them. At least, that's my justification. Am I wrong?

So--here's my first solo foray, this one to an intimate view somewhere in France. I love shutters, many-paned windows, and hanging flower boxes, framed by the old tea-colored stone of several-hundred-year-old buildings, don't you?

I challenged myself because I was short on time this morning, so the drawing took 20 minutes and the painting took 30. I am dumfounded by people who seem to do a complete, finished-looking painting in that time (or less!)--I guess it's a combination of practice, skill and knowing what to put in and what to leave out. Anyway, LePen and watercolor of shutters and flower baskets. It probably would have benefited from another 10 or 15 minutes of judicious shading, but..I'm calling it finished. 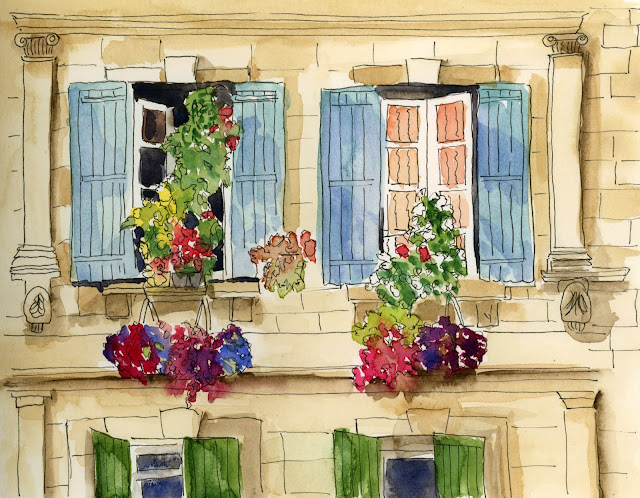 My ex loved coffee shops. I ate more patty melts, tuna melts, and chili sizes in my seven years of marriage than I have in the many decades since. (Of course, becoming a vegetarian a few years after the divorce might have something to do with that.) So when we moved into our first home (in which I still live, 30 years later), we scoured the neighborhood for the best local. There was a Denny's, of course, but chains didn't count--it had to be authentic, preferably family owned.

About a mile up Balboa, on the corner of Saticoy, we discovered Heart's Coffee Shop, and it looked like the perfect local hangout...but we went there exactly once. Although the sign and decor were right on the money (red vinyl bar stools! my ex enthused), the food wasn't very good, and the service was terrible. It was one of the times when I put my foot down and said "Once was enough!" and we never went back there.

I have, however, always loved the sign (especially the handwritten-on-paper part!), so I thought I'd do a sketch just for Valentine's Day. I'll bet there will be a bunch of lovers who will go there for breakfast today, so they can take a photo in front of the heart-bedecked decor. I hope the food and the service have improved since the '80s, so that they enjoy more than the ambiance. Maybe I'll give it another shot one adventurous Saturday morning. 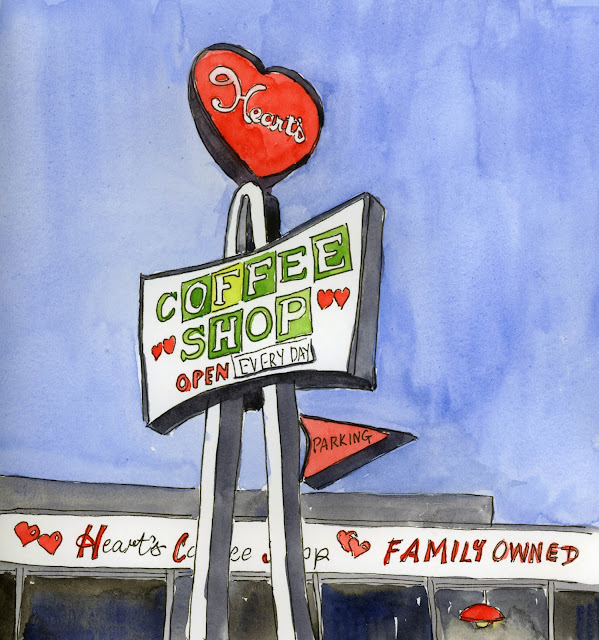