After two weeks at home, doing not much, I'm returning to work this week, in a limited fashion. The plan is to do 15-20 hours for the next two weeks, thus easing gradually into a regular schedule. I'm not absolutely convinced I'm even ready for that, but I'm going to give it a shot tomorrow by working 4-9 and going to my 6+7 grade book club. We're discussing Cinder, by Marissa Meyer. (In which Cinderella is a cyborg, the prince is the incipient emperor of China, the moon is colonized, and the queen of the moon is the baddie. It's quite clever.)

It's frustrating to be off work, at home surrounded by so many things one could be doing, but not feeling up to doing them. Besides the obvious painful bruises, I had (and still have) less obvious aches and pains in muscles, nerves, and tendons, and intermittent low-grade headaches accompanied by fuzzy brain. So the most I have managed in two weeks is to read four books, binge-watch a couple of seasons of various TV programs, and do a few dishes when necessary. Every day but a couple, I had one or two specific errands to run—a trip to the chiropractor or the doctor, an appointment at the imaging place for an ultrasound, a stop at Enterprise to pick up a rental car, or swinging by the market because I was (once again) out of cat food; and after those errands, all I could do was lie down and nap away the afternoon.

So, I'm returning to work regretting that this was necessary entropy rather than productive time for art or projects. Today, I was resolved that on my last full day at home, I would at least make some art. But then I had paperwork to do for the lawyer, and an appointment to check out a physical therapy site, followed by a visit to the chiropractor, so no art materialized at home.

I did, however, end up having about half an hour between the PT visit and the chiro, so I stopped in at California Chicken Café to pick up a veggie wrap for my dinner (anticipating that I would be too tired to make any, which was a good guess), and while sitting there drinking an iced tea and waiting for the chiro to open, I made an urban sketch of fellow diners in my small sketchbook I keep in my purse. 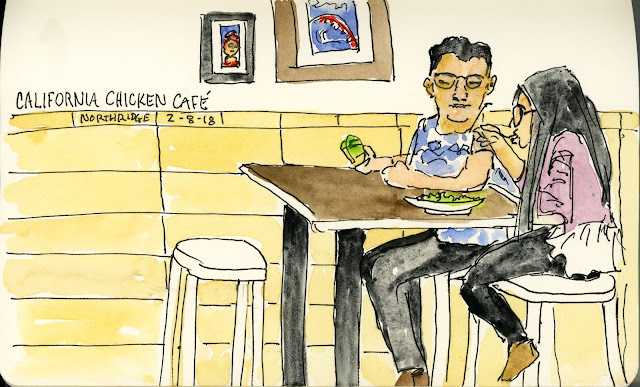 I hope to have more energy back soon!