I decided life would be better with some structure. It seems like the more I have to do, the more I get done; but only when it is outwardly imposed. The truth is, this is the year I'm supposed to go from Miss Havisham to Marie Kondo, but every day I find a blog post to write, a meme to create, a book to read, an errand to do, that keeps me from starting that gargantuan household project. So what am I doing about it? Signing up for a class, of course!

I've been following a Facebook page called Linocut Friends for quite a while now. I have always been fascinated by all kinds of print-making (and used to be into making my own rubber stamps), but have never learned how to do any of it; but all these carvers inspired me to look for a local class. I found one out at Moorpark College, which is actually a four-semester program covering all types of print-making, but since I'm not interested in the kinds that use chemicals, I'm sticking with semester one, which is intaglio followed by linoleum cutting, and then I will branch off on my own. Class started last week, and our assignment for this week was to go buy all our supplies (ouch), and then come up with some ideas and maybe some sketches for our first project.

We will be incising two 5x7-inch plates for our first project, and the theme is "Parts > Whole." So the first plate is supposed to be all the elements that build up to something final on the second plate. The teacher used the example of an apple, by depicting seeds, blossoms, bark, etc. on the first plate and the whole apple on the second; or including the apple on the first along with butter and bags of flour and sugar, and making the second plate a PIE.

I have two ideas, one of which came to me because I've been reading Circe, by Madeline Miller (see my review here), and the other from doing a little illustration project for my cousin's blog.

The first idea is the legend of Persephone, so the Plate One would include a narcissus (because that's the flower Persephone was out picking in the field when she was kidnapped by Hades), and a pomegranate (and seeds) because that's how he trapped her into staying with him for half the year. The second plate, if I can pull it off (this drawing is pretty bad) is a copy of a fragment of a sculpture featuring Hades and Persephone, and perhaps some symbols for the four seasons. 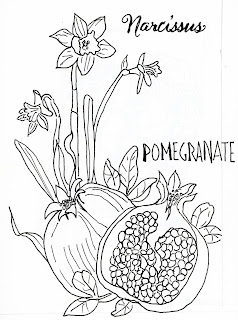 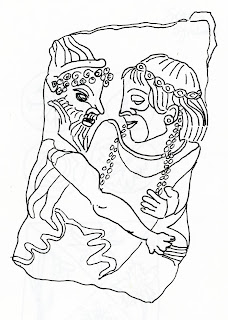 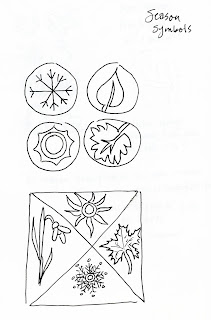 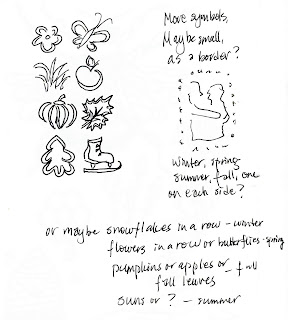 Kirsten bought a book for me at Christmas, and wanted to feature it on her blog, The Swoon Society, so she asked me to make an illustration for her. (Not putting that up here until after she has used it for HER blog.) It made me think about bee-keeping, which is something else I have always wanted to do, and in the process of looking for images online to help me with the illustration, I came up with some ideas for Parts > Whole for my own project: 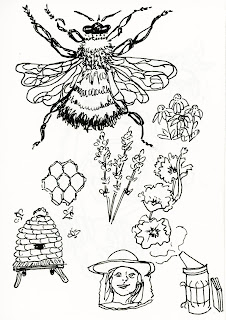 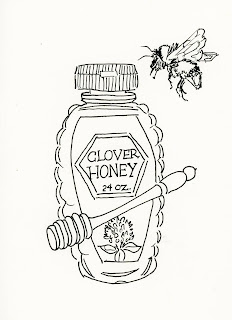 These are all, of course, just sketches, and not unified in style, but they gave me some ideas. We will see what my teacher has to say about these. New art form, here I come!