Okay, I confess it--I was supposed to illustrate some peaches for a recipe, and all I had in the house was nectarines, so I thought, "Who could tell the difference in a painting?" The thing is, I think I can! 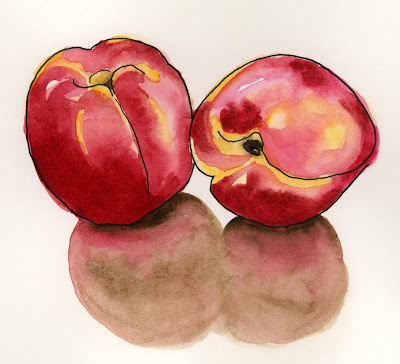 There's something smoother and richer in color about nectarines as opposed to softer (in texture and in color) about peaches, and for all my efforts, these look like nectarines to me. What do you think? Can I get away with it? Or do I need to head out to the farmer's market tomorrow morning and get some real peaches to draw and paint?

Overworked shadows, as usual. Somebody has to tell me "the secret."

Next drawing: Something with packaging. I'm getting burnt out on veg and fruit.
Posted by Melliott at 1:25 PM 6 comments:

I looked up the definition of broccoli, and it said "branched green undeveloped flower heads," as well as "the flowering top of a cabbage." Its latin moniker is Brassica oleracea botrytis, which sounds vaguely like either a special kind of musical instrument or a wrinkle treatment, I'm not sure which.

Anyway. . . keeping up with my regimen of drawing and painting one ingredient between when I arrive home from work and nightfall, tonight's product is BROCCOLI. 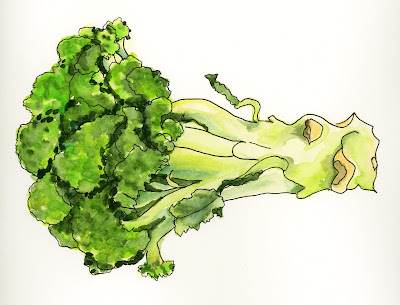 At the last minute, I didn't put in any shadow, because I happened to turn the page sideways and realized that if I left it out, the cookbook designer could use it either horizontally (the way I painted it, lying down) or vertically, which actually looks better, I think. So there it is.

Those "undeveloped flower heads" are really hard to duplicate--or at least they are if you have as little patience as I have, combined with a deadline (i.e., the sun is dropping below the roofline of the neighbor's house). I ended up just dotting around various shades of green and hoping for the best. 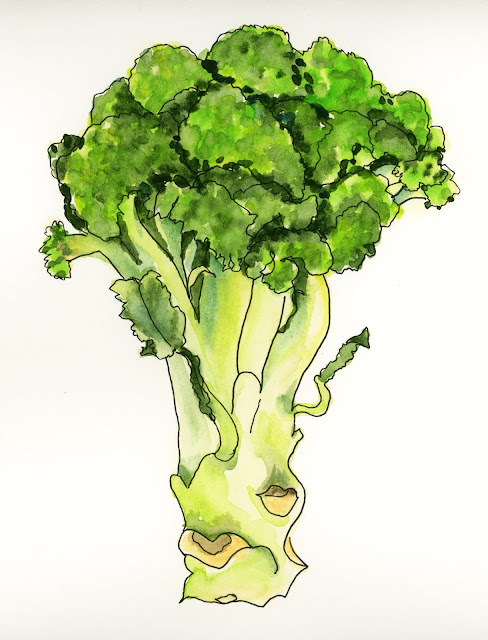 Getting down to the wire on the cookbook, and I have to quit messing around repainting the same things over and over and get 'er done. I'm going to plan to paint an ingredient to go with each recipe every night when I get home for the next week or so, and I should be done. Tonight: Mushrooms. I bought an array to give a little interest--white, crimini, portabella, shitake--and tossed them out on the table. The shadows and the mushrooms got a little confused with each other, but it was fun to do this essentially monochromatic study. Tomorrow: Broccoli! 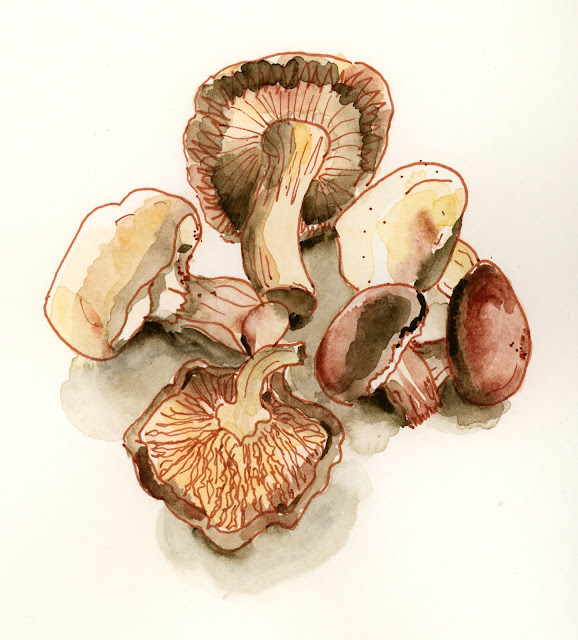 Well, they were still sitting there on the table...so I did them again using a different method. Since the other illustrations I have made for the cookbook are drawn first with pen, I decided to do that here too, but I used a sepia-tone pen instead of black, since the colors of the onions invited that. 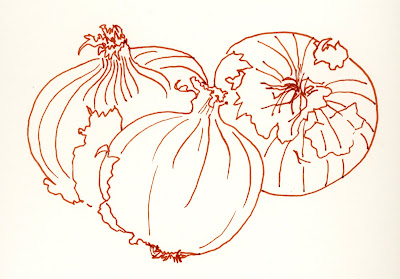 Drawing with pen before you paint allows you to define some areas using more than color, which can be an advantage...but it also takes away a little from the subtlety of the movement of color itself. So, for instance, it's much easier to delineate the lines running through and around the onions with a pen, giving more directionality and volume, but it doesn't allow for the fine gradations between areas, since that space is taken UP by the line of the pen. I scanned the drawing first in case I want to use just the drawing for the cookbook instead of the full-color version.

I also got a little carried away with the shadows today, and I'm afraid they are distracting from the subject of the onions, especially that wiggly bleed line between the purple and white onions, which I will have to go back and blur out a bit. I went into this too often, trying to get the colors right, and that was the result, proving it's good to know when to stop while you're ahead.

But it was fun to do this two different ways. Which of them expresses inherent onion-ness? 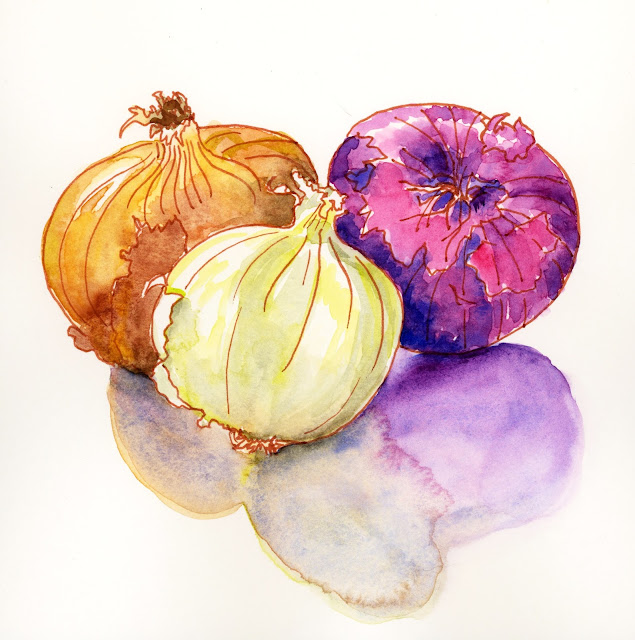