Today I had an adventure. Two weeks ago, Virginia Hein, a local urban sketcher and watercolor teacher, posted that she would be doing a class today to try out some things she wants to teach at the Urban Sketchers Convention in Porto this summer. She did this last year too, and I enjoyed it, so I signed up to attend.

Someone mentioned going on the Metro, and since I have never done that, I decided I would try it out. I have had the intention to use it for both of the Women's Marches in Los Angeles, but the Orange Line to get there was so overcrowded I couldn't get on, and I ended up driving both times. I thought trying it out on a non-pressure day like today would be good. Virginia mentioned that the parking in the lot closest to our meet-up was $9, but that Union Station was almost exactly the same distance from there (right across the street) and the total round-trip fare is $3.50, so it seemed like a good decision.

It turned out to be a bit of an overdo for me, given the recent history with my knees and back (see post about car accident below). Yes, Union Station is right across the street from Olvera Street, but no one mentioned the elevator, the escalator, and the walk down the loooong tunnel one has to traverse from the exit to the Red Line up to the surface and out to the front entrance.

I gimped my way over to the square, and was immediately glad I had come. There's so much to see, from a painterly perspective, that you could spend weeks there painting just from the square and still have things to render. A lot of familiar faces were there from USk Los Angeles and from the Meet-up group--Phoebe, Debbie, and Shiho, Claudia, Gene, and about a dozen others, and of course Virginia.

Our objective was to think about how to draw (with pen) just enough but not too much; to minimize our view so that we were capturing what we wanted and leaving out what we didn't; and the additional idea of leaving some areas completely blank and going in with watercolor after to define those spaces as shapes. Some of us were quite successful at achieving this, while others (ahem) may need a little more practice.

Our first half hour after Virginia's explanations and demo was spent drawing without being minimalistic—drawing what we saw, with little to no editing. I did edit to the extent that I severely cropped the area at which I was looking, but you can see from the drawing at the bottom that I threw in everything within my view. 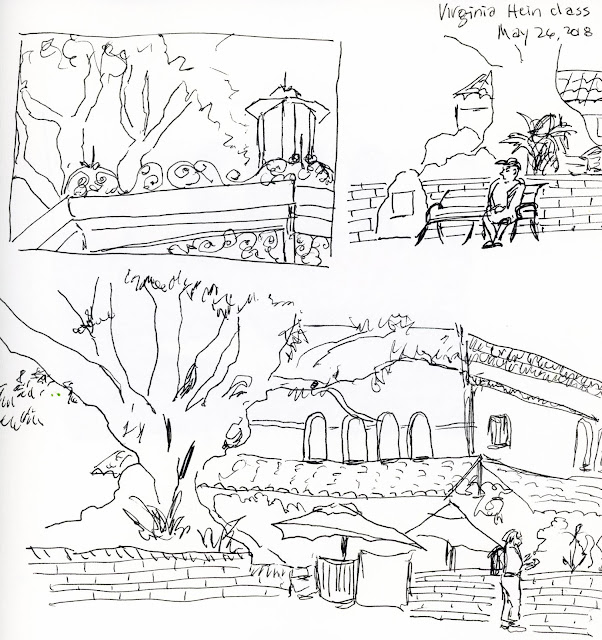 So in Virginia's version, for instance, the brick walls would not be delineated, they would just be blocks of color, and maybe the windows wouldn't be drawn, they would just be dark, window-shaped slashes in the white. And foliage is blocked, dabbed, and dotted, without drawing each (or any) leaf.

The second drawing, I maybe focused in too closely, and when it came time to add color, I didn't exactly do what I intended. I have a new paintbox, into which I squeezed fresh colors just two days ago, so some of them haven't dried out yet. This made for a messy and unpredictable mix of colors, which resulted in a weird treatment behind this lamppost. It was supposed to be tree foliage back there, but it just looks like dramatic sky, because I ended up with too much neutral tint. 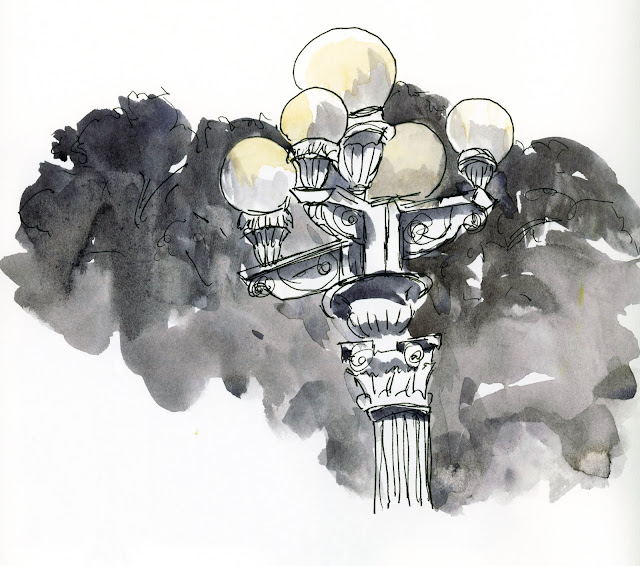 For the third one, she wanted us to look back at a scene we had studied before and edit it down until it had in it what we considered important or interesting. This didn't turn out quite as planned, but I think I'm getting the idea. 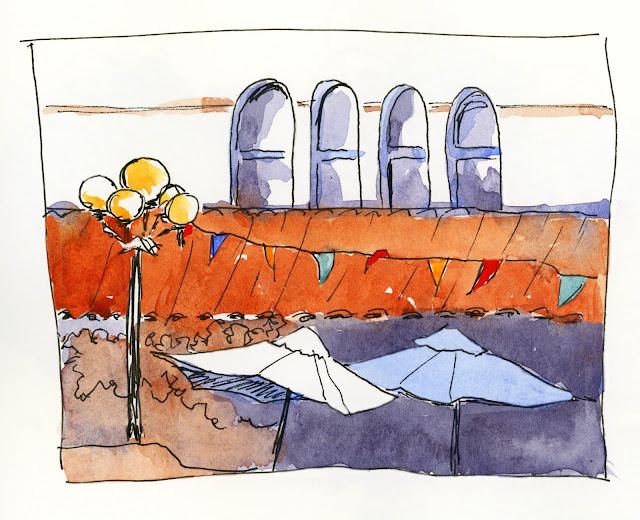 I did a fourth one, but I'm not posting it because it was a total fail. Maybe I'll go back and try it again later.

After we wrapped up at noon, we had a convivial lunch at the Mexican food restaurant on the corner (Chile relleno, rice and beans, with a big hot cup of Champurrado), talking about art and our favorite mysteries (Phoebe and I trading multiple author recommendations). Then I set out on my trek back to Union Station (a security guard blessedly showed me a shortcut elevator to get to the Red Line that involved half the walking), then to NoHo, and back to Balboa and Victory on the Orange Line. While I rode on the Orange Line, I drew; she wasn't paying attention to anything but her phone, so she was a good capture, sitting quite still. Only problem was, my brown Micron pen ran out three-quarters of the way through, so I had to continue the drawing with a black pen, meaning I had to go back in and introduce black everywhere so it would work. 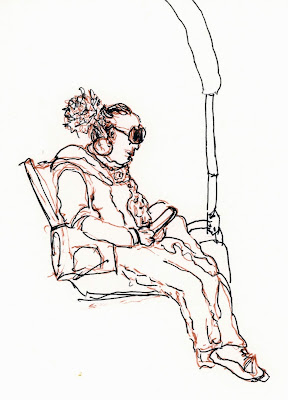 Next time I might drive; or maybe by next time my knees and back will be more excellent than they are now. Either way, I'm definitely going back to Olvera Street to paint! (But for now...a nap.)