Last week I met a friend mid-afternoon at Hugo's for a late lunch/early dinner, and got there about 15 minutes early, so I did a sketch while waiting for her. The restaurant was uncharacteristically empty—it's a popular spot, but we seemed to have hit the lull between lunch leaving and dinner arriving. I really like the earth tones and green they used to decorate the restaurant—along with the lighting, it gives an intimate atmosphere. 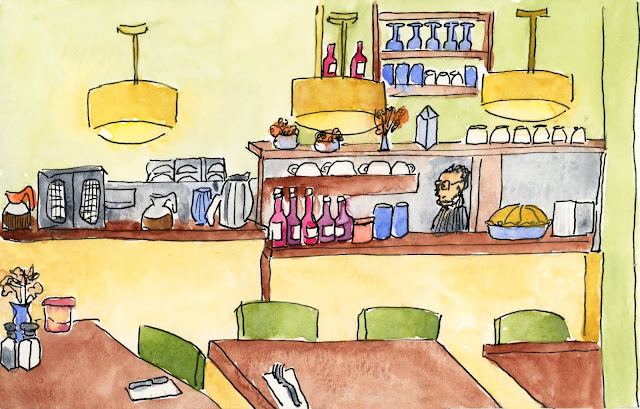 Tuesday morning I woke up late and a little cranky.  I didn't have many groceries in the house and couldn't figure out what I would have for breakfast. Then I remembered my cousin telling me that the AMC in Woodland Hills does a special on Tuesdays—$6 for all movies for seniors (60 and over), all day! So I took myself to Bobby's Coffee Shop as a treat, where I did a sketch of the other end of the bar while I waited for my food, read my book, and enjoyed having someone else cook my (late) breakfast, and then I went to the movies. (I saw The Good Liar, which was great!) I'll have to remember this outing for future moody Tuesdays. 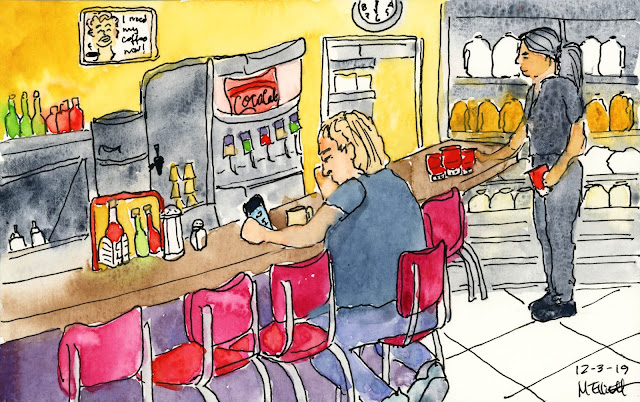 Bobby's was similarly uncrowded, between breakfast and lunch, so the only people in my sketch were this lone cell phone studier and one of the waitresses, who was renewing the supply of ketchup at the empty end of the bar.

Uniball pen and watercolor, in my Moleskine sketchbook.

Posted by Meligelliott at 12:23 PM No comments: