My other Christmas painting

In addition to our family circle, which always draws names, we have a few people we love who have been joining us for Christmas Eve for many years now. Two such people are my cousin Kirsten's best friend, Kirsti, and her husband, Aaron. This year I had no trouble finding multiple gifts for Kirsti, but I was stumped for Aaron. I found a few things online, but by the time I was ready to make up my mind, I discovered that I was in denial about how long the mail would take (Amazon has spoiled us all), and nothing would arrive in time.

I keep a file of "reference photos" on my computer—photographs that I think would translate well into watercolor paintings—for when I am lacking inspiration, or when I need to capture something that is happening too quickly to paint from life (not a still life, but live action). One such photo had been there for years, and I have considered making a painting from it for that long, but have never gotten up my nerve; I am generally bad at portraiture, and not great at painting animals either. But when I went and "thumbed through" my ref photos file on Sunday afternoon, it popped up again and I decided I was going to give it a shot.

I did the drawing and laid down a nice warm yellow background around 5:00, and then sat down on the sofa with my book to drink a cup of tea and let the background wash dry; suddenly, it was two hours later, and I was waking up to cold tea and the prospect of wrapping ALL of my Christmas presents. So I switched on the TV and wrapped until 11:30. By then, because of my nap, I had a second wind, so I thought Hey, I'm going to finish that painting for Aaron! I figured it would take me an hour, maybe 90 minutes. When I decided the touch of shadow I had just painted was my last brushstroke, I looked up to discover it was 2:30 a.m.! But I got it done, and next day my framer obliged with a mat, and I was able to give it to Aaron on Christmas Eve. 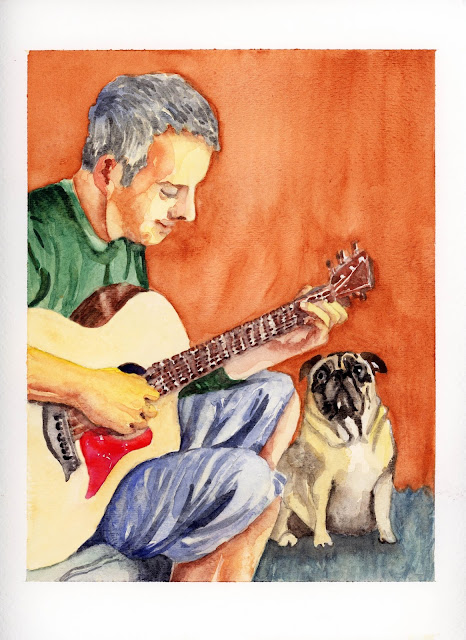 That's Aaron with the guitar, and his quizzical and engaged listener is Owen. Owen sadly passed on a while back, but Aaron appreciated the memorial, and said I exactly captured Owen's expression as he listened to Aaron play. I called the painting "Freebird" not because that's what he was playing, but because of the lyrics: It's been a sweet love, he had to travel on, but this love you cannot change. The love and loyalty of all our wee beasties is so precious. I loved making this picture of the bond between Aaron and Owen.

We draw names in my family, and buy one large Christmas gift for one person. This year, I drew my cousin-in-law, David. As we all get older, it gets harder to find something special to give, because most of us are working, making a decent living, and for the most part buying for ourselves the things that we need and want. So I decided that I'd like to paint him a picture, because that's something he couldn't do for himself; but what to paint? He previously had some Asian-influenced art in his apartment, but my cousin Kirsten said he was phasing that out and going with a pure Arts and Crafts movement vibe. So I went and looked at the designs of William Morris, Charles Rennie MacIntosh, Edward Burne-Jones, and others, and tried to figure out something to paint.

The problem with that movement (which I love probably as much as David does) is that most of the so-called art is actually functional: architecture, a lamp, a chair, a ceramic pot, the tiles surrounding a fireplace, or (in the case of Morris) a wallpaper  or textile design. After all, the famous quote from Morris states, "Have nothing in your house that you do not know to be useful, or believe to be beautiful." Although there were painters from that era, I am not so cognizant of the entire movement that I knew who to look up, nor did I feel confident in David's preference for one over another. So after feeling frustrated for a while, I decided to study the wallpaper designs of Morris, and to choose one of those to copy in watercolor.

I ended up with one of his many variations on an acanthus-leaf design, this one including a couple of flowers and with some bright, contrasting colors (so much of his work is subtle and dark and therefore hard to copy from a print). Because I came to appreciate the intricacy and deliberation he put into each of his designs, I documented my steps in painting this piece. Here they are, start to finish:

The "drawing" was done as a trace; I printed out a photo of the wallpaper swatch at the size I wanted, did a double-layer of graphite transfer (translation: I scribbled on the back in both directions with a soft-lead pencil) to the back, then laid the xerox on top of my watercolor pad and faithfully traced all the leaves, flowers, and branches onto the paper. 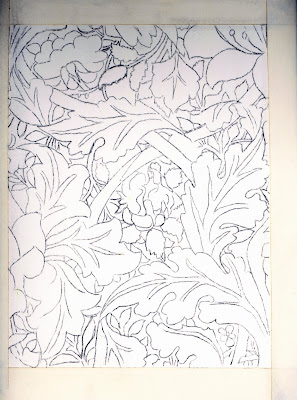 I decided to proceed from light to dark, leaving the background color until last, especially because with that color being intense, it would cover a multitude of pencil edges so I wouldn't have the challenge of erasing them. So I began with the pale blue-green acanthus leaves: 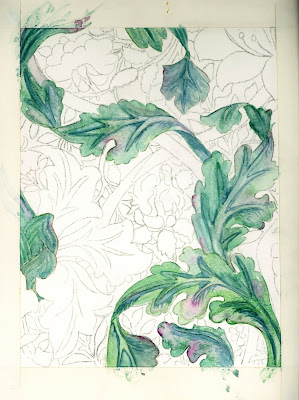 There was a lot of shading and color variation in each leaf, not to mention the introduction of an occasional dot or splotch or another color (pink, in the case of the green leaves).

Next was the intense mustard yellow: 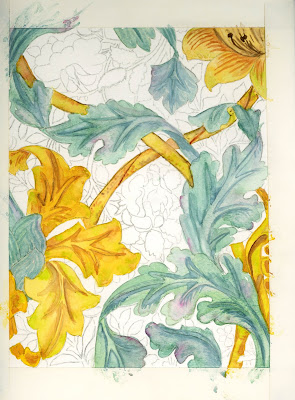 Again, duplicating these leaves entailed at least three separate colors of yellow/brown, and had unexpected highlights of lime green.

Next came the green of the two blossoms and the darker greens and browns of all the background leaves and vines: 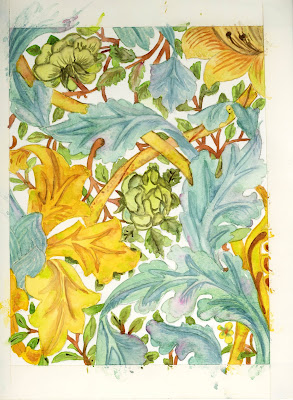 These were particularly hard to achieve, since many of the leaves had veining, which I wanted to be there, but to look natural, not like lines painted over the top. In some places I succeeded, and in some not so much! I think Morris himself must have painted in oils, which might have been easier?

And finally, I applied the background by carefully filling all the remaining white space with a deep, rich red. It really makes all the other colors pop, and shades the borders together too: 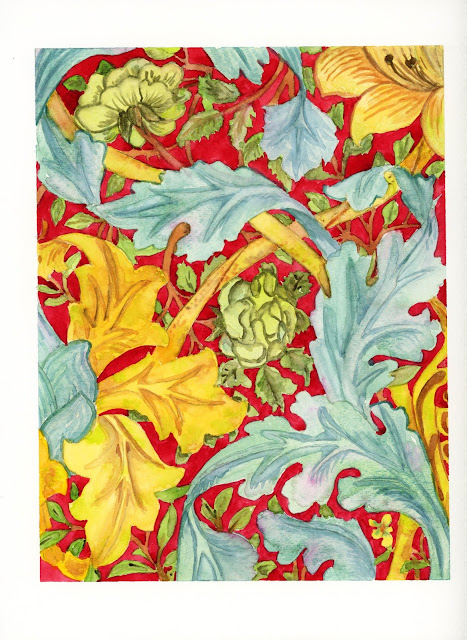 Then I went back in and added a bit of shading and a few darks, for more emphasis.

I hope that David enjoys hanging and looking at it as much as I did painting it. It was quite a lesson in layout, design, color theory...there is a reason William Morris was a major figure of his day and continues to be lauded all these years later.

People were impressed that I painted my own gift tags this year, but what really happened is that I was so disorganized that I had no other choice. I turned in the grades for my students at UCLA on Dec. 14, and thought to myself, Okay, 10 days until Christmas, plenty of time to get everything done, and then...I zoned out. I suddenly realized, on Dec. 22nd, that although I had gifts for about 85 percent of my people, I hadn't bought any paper or ribbon or gift labels, I hadn't wrapped anything, and I was still missing a couple of big gifts, at least one of which I was supposed to be making myself. I checked my cupboard and discovered I had enough leftover paper and ribbon from previous years to make it work, but there wasn't a gift tag to be found. So, I chopped up a couple of sheets of watercolor paper and spent an evening in front of the TV drawing little bunches of mistletoe and holly, a couple of trees, and a nice wreath for my main giftee (David)—we draw names in my family, get the person we draw something big, and then maybe a small thing for everyone else.

Here are my tags, most of which arrived with their designees last night (we do Christmas on the Eve), so now I can show them: 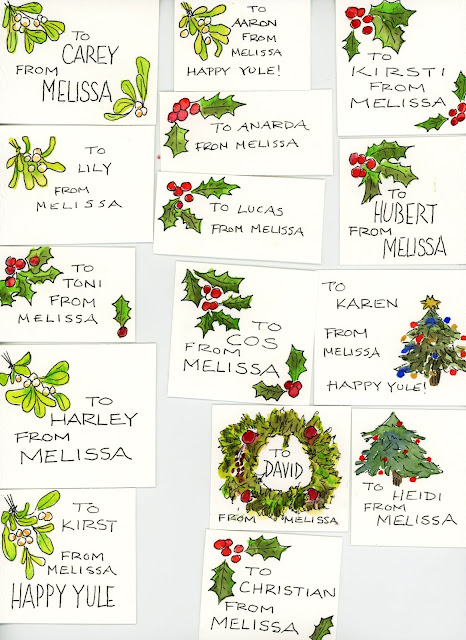 Uniball fine-point black pen and watercolors (various makers) on watercolor paper. They were fun to make; maybe I'll make it a tradition.