Ah, the simple can of Campbell's Cream of Mushroom soup--what would American "cuisine" be without it? From the infamous Classic Green Bean Casserole so prevalent at holiday dinners to the 18 kinds of one-dish chicken-and-something concoctions, the contents of this can are pervasive. Campbell's Kitchen lists 1326 recipes using CofM!

My ex-husband's favorite quickie meal was to dump a can of this in a saucepan with a can of tuna (liquid included), some shredded cheddar cheese, and a splash of Chardonnay or Chablis (whatever was open). He'd stir that up and heat it through; then he'd pull a cookie sheet of crispy hot Tater Tots out of the oven, dump them in a bowl, and smother them in "gravy." Yes, it sounds repulsive. Yes, I have been known to make it as comfort food when I'm home sick with a cold. Don't tell anyone. 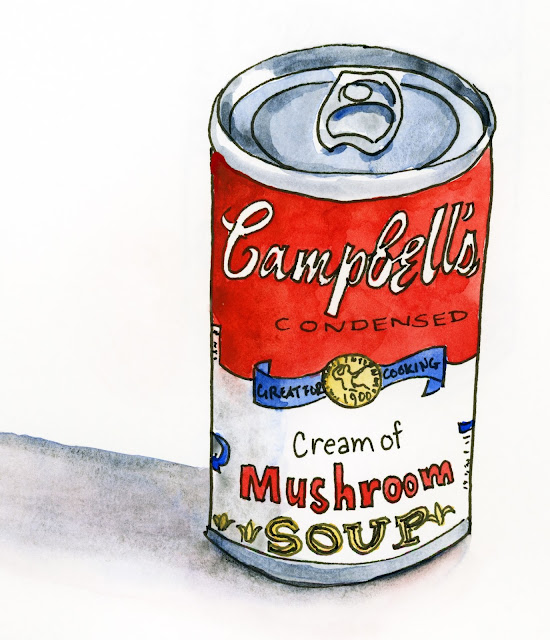 The famous can wasn't as simple to paint as it is to use, however--I tried this one three times in two hours, and I'm going with this one, warts and all. Andy Warhol it ain't (and anyway, his ultimate icon of choice was Tomato)--but I think it will do for our cookbook.
Posted by Melliott at 8:58 PM 4 comments:

Okay, I bought peaches--yellow peaches--and I painted them. So--peachy? or still indeterminate between peach and nectarine? I tried to think peachily while I dabbed away. . . 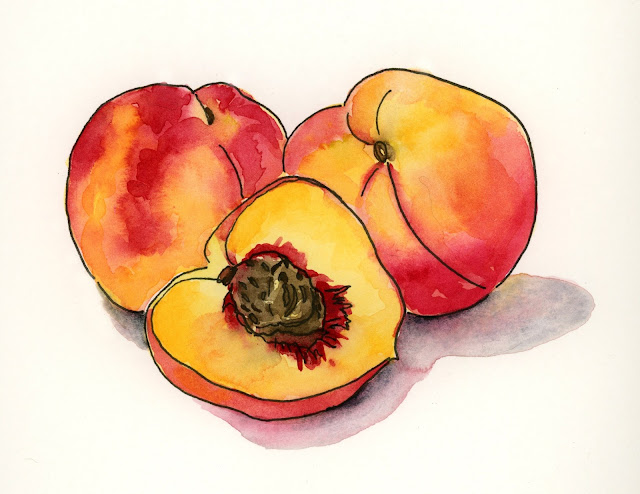 Next up, that staple of American cooking, a can of cream of mushroom soup!
Posted by Melliott at 11:00 AM 6 comments:

Quit while you're ahead

I got done with the drawing of this one and I knew I should start over. But I liked more than half of it, so I deluded myself that I could save it by painting it. I forged ahead and spent another 90 minutes watercoloring, and...I should have started over. 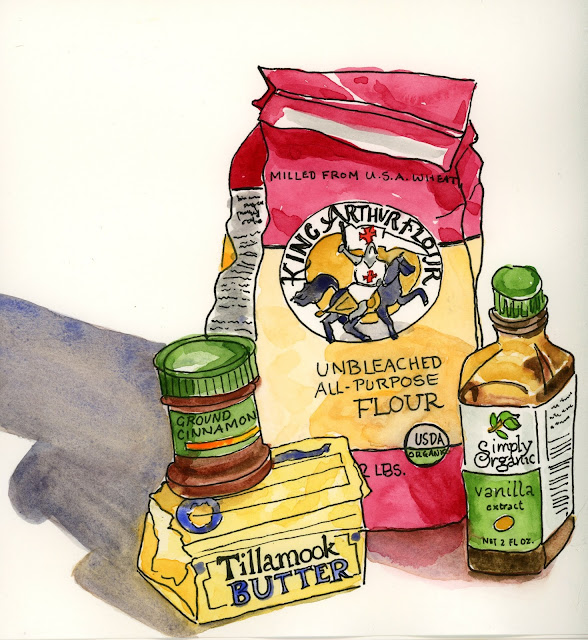 I began the drawing at the top left of the flour bag, which makes some sense, but then when I got to the vanilla bottle, I drew that and it wasn't quite where it should have been, and then I drew the cinnamon (which looks tipsy) before I drew what it was sitting on, leaving the butter until last, and something that is perfectly geometric came out too big and flattened weirdly and not at all shaped like a stick of butter. I should have started with the foreground (the butter) and moved backwards. And I will, the next time I draw it. (Also, the shadows were weird.)

I'm putting it up as an object lesson in how not to become so enamored with one part of the work that you ignore all the problems! Too bad--I don't have much time for do-overs if I'm going to finish this project! I thought about removing the shadow on the left, and then redrawing just the butter and cinnamon and dropping them in via Photoshop, but...probably less work just to start again.
Posted by Melliott at 9:01 PM 4 comments: