Back to the prompts

I'm running behind on Doodlewash November, so in the interest of catching up, I decided to see if I could combine prompts. The two I chose were "Raccoon" and "Pomegranate," which seem unlikely as co-conspirators, but guess what? There is a video for absolutely every eventuality in life on YouTube, and one of a raccoon enjoying a snack of pomegranate seeds, sitting on pillows at a table and scooping them up from a pretty china plate is no exception! So I took a screen grab, and here we are: 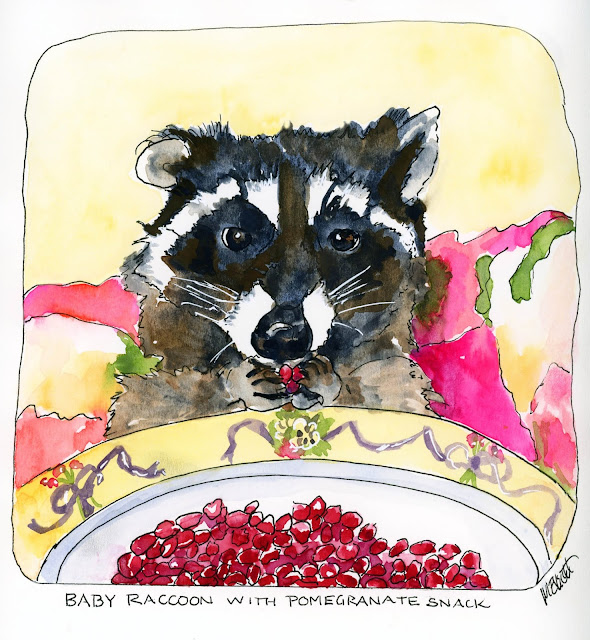 Posted by Meligelliott at 7:08 PM No comments:

A couple of years ago, I took a class from Sketchbook Skool on map-making, taught by the talented Nate Padavick of theydrawandtravel.com. That year, teen summer reading club had a travel theme, and I came up with the idea that the teens could do a map for one of their summer projects—either a map of actual places they had been on vacay, OR a map based on a book they were reading. Anarda and I put together lists of books with road trips in them to facilitate ideas, and held a couple of workshop sessions, hoping for participation. Alas, the teens were not as fascinated with the idea as we were, and we only ended up getting about half a dozen to participate. We each had fun making a map, mine based on the book Anna and the French Kiss, by Stephanie Perkins, and Anarda's centered around Laini Taylor's Daughter of Smoke and Bone.

Two years later, I received an email saying that theydrawandtravel.com was having a contest, involving maps of "special places." And since for the past two years I had been contemplating an idea for a map, I decided, last week, that I was going to make and submit it.

Cousin Kirsten and I meet semi-regularly for breakfast out, usually on a day when she doesn't have to go to work until noon. For a long time we just went to one of our regular venues, but after a while we got bored and decided that since there were so many restaurants in the Valley, we should be explorers and try out a new one each time we met for breakfast. For about two years, we did just that. We did return to various places multiple times if we liked them a lot, but we tried to keep throwing new ones into the mix. We were somewhat restricted (this being Los Angeles) by morning traffic from going too far afield, so most of our choices ended up being in the west Valley, between my house (dead center) and hers (far west).

I sat down last Wednesday, looked up all the restaurants, and put them in order according to address, most of them along Ventura Boulevard. Then I made a small drawing of each restaurant's logo. Between Thursday and Sunday, I drew and redrew the map in pencil until I had everything just so, and then inked it onto good paper and watercolored it. And last night I submitted it to the contest.

Here is a .jpg of all the places we have sampled the eggs, potatoes, toast, waffles, coffee, etc. in the past couple of years:

And here is the link where you can find my entry, online at theydrawandtravel.com:

Kirsten is responsible for the title and the synopsis (inside the legend box), plus lots of helpful critique in-process. It's always beneficial to have someone who will let you bounce your ideas off of them!

Here are the details of the contest: https://www.theydrawandtravel.com/stroly-contest

I have no illusions that I will be one of the winners; but I'm so excited to be in the company of all these fantastic artists, and I admit that I do hope to be chosen for the top 100.

Also, check out Nate and Salli's other website, theydrawandcook.com. Similarly great art, and yummy recipes too.

Posted by Meligelliott at 9:02 AM 4 comments: