My friend Carey has moved to Monrovia--both her household and her job (she used to be the head of the Reference Department at my library, and now she is the library director for the Monrovia Public Library, la di dah), and we miss lunching together a few times a week and talking librarian. So we decided to meet up halfway for breakfast yesterday. There are lots of places we could pick, between Monrovia and Van Nuys, but I suggested Montrose. I took an art workshop there once, and remembered it as a cute little town, eminently drawable, and with lots of restaurants, and I figured we could have breakfast and then I could stay to sketch, if the weather didn't turn too hot. So that's what we did.

We met at a neighborhood favorite called The Black Cow Café, and it is deservedly a hot spot--the food was great, the service was great, and even though they had a pretty full house, there was no hurrying us out the door so they could turn over the table--they let us sit and tell each other stories for two hours. Afterwards, Carey headed out with a to-go order of cheese-and-jalapeño biscuits (she had them with gravy for breakfast and pronounced them irresistible), while I moved directly across the street to a shady bench, to set up and paint the café. It wasn't what I had planned on painting, but I wanted to commemorate our morning. I think we have found "our" place to meet for future breakfast dates! (I wonder if Carey's boyfriend got a single one of those biscuits...) 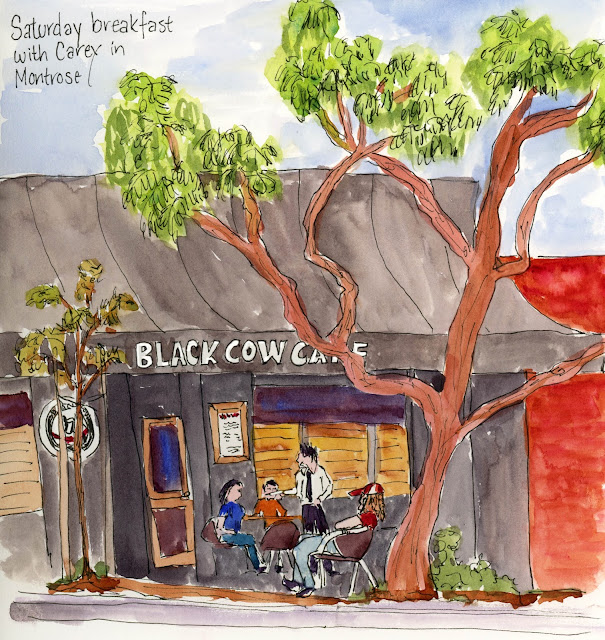 It's challenging to mix all the colors I need from my portable palette, which is my Altoids tin with just five colors in it that I made last summer with the teens at the library. But I managed pretty well. 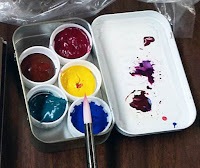 Posted by Melliott at 7:26 PM No comments: