I haven't gotten too far with my "real people reading" series; I'm having trouble finding models. When I go to the library looking for surreptitious opportunities to shoot photos, most of the people are either on a computer, scrolling through their phones, or, if they are reading, it's a newspaper, which is not what I have in mind. (I guess all the real readers come to the library, check out their books, and take them home to read.)

This past week, I decided that if I couldn't find real-life readers to paint, I would look at Google Images and see if I could find some photos of people reading. I did...but the problem with most of them is that they were taken by modeling agencies, so the readers are all young, all pretty, most of them are white, and they are smiling (yes, sometimes books are amusing, but do you typically smile at your book when you're sitting alone reading? I think not). And even if they're not smiling, they have that self-conscious look that screams "I know someone is taking my picture." Also not what I had in mind.

Although it's a bit extreme to paint someone without their head in order to lose that self-conscious look, that's exactly what I did here. The focus becomes the book, the relaxed pose sitting on the bed, and the cup of something hot she's holding in her hand. 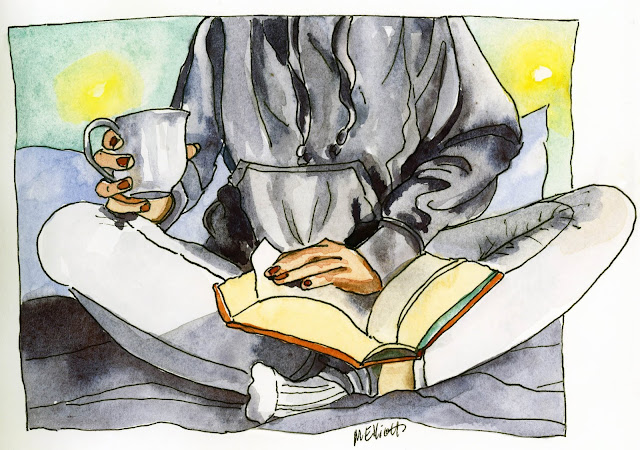 I guess I'm going to have to get some friends and family to pose for me, and adjure them sternly not to smirk while I'm clicking away.

After enjoying making Yule cards and sending them to five strangers so I could get five back from strangers (members of Sketchbook Skool), I somehow found myself agreeing to repeat the process with Valentine greetings. I haven't been quite as inspired this go-round because, let's face it, it's kinda weird to send lovey-dovey cards to people you don't know. So I pondered for a while, and I thought of one card with a pun, which I made. Then, baffled for other ideas, I Googled "Valentine puns" and hit the jackpot. So while the illustrations for my postcards are original, the puns are already out there in the world, the inspiration of others more quick or clever than myself. Here they are, on their way to the Netherlands, Montreal, Oregon, Florida, and Columbus, Ohio. 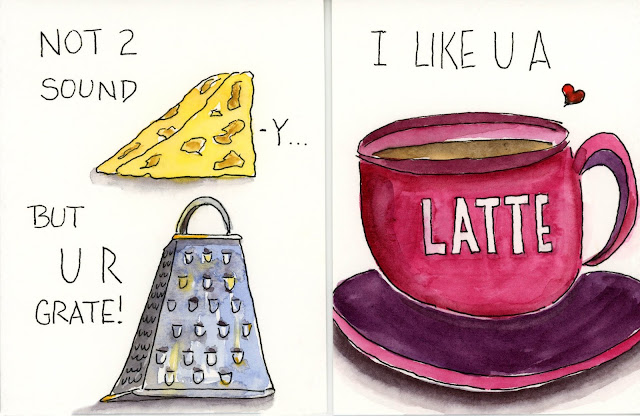 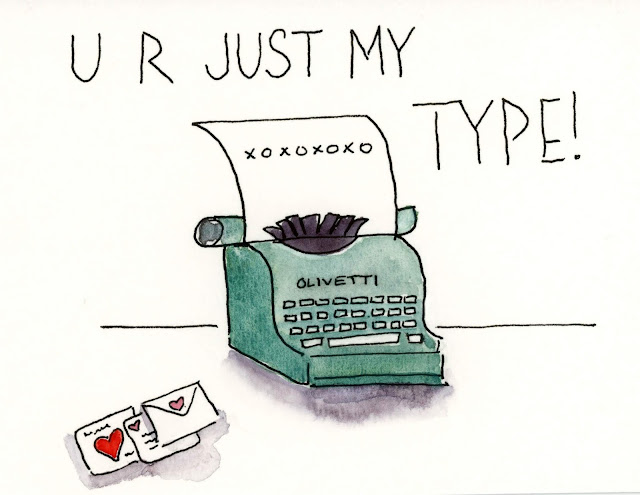 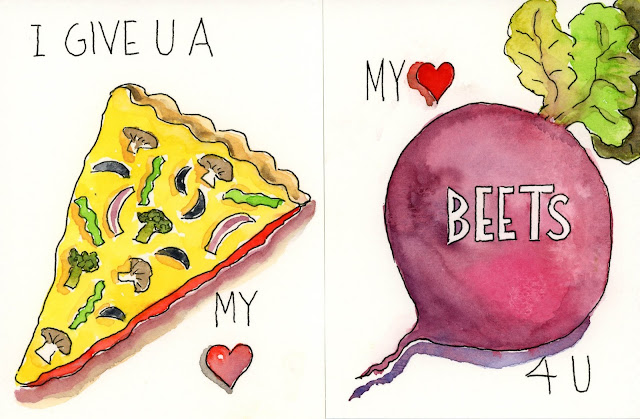 The backsides of the postcards (which I mailed in envelopes because of the varying postage) all had some take on "My Punny Valentine."

Yes, sometimes when you are semi-retired, you spend an entire day doing, well, THIS.

Yesterday was the Worldwide Sketchcrawl, for which urban sketchers all over the globe turned out singly and in groups to sketch their surroundings "en plein air" in their sketchbooks. The Los Angeles division of Urban Sketchers met up at the Millennium Biltmore Hotel (when did Millennium become part of the name? it's the old Biltmore) downtown on Grand Ave., to immortalize all of its very fancy bits and pieces. We usually have 10 or 15 people show up, but added about 10 or 15 new people this time (perhaps because it was the worldwide date), so we had around 30 of us spread out in the lobbies, hallways, and façades. 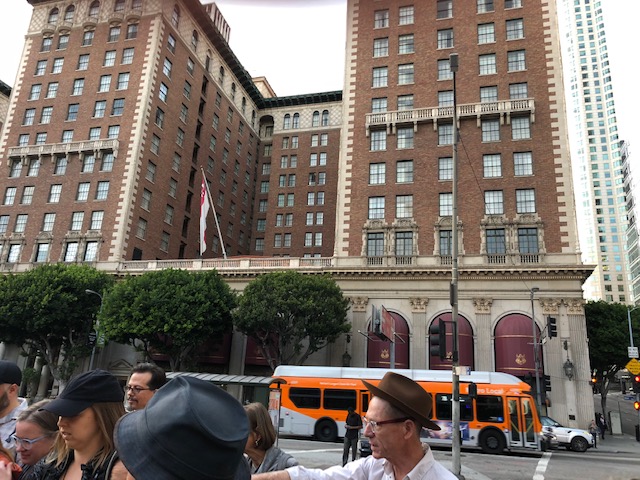 I managed to make three sketches. The first was a doorway from one of the Biltmore's many hallways to the street, with a little ceiling detail thrown in. My proportions were incredibly wonky for this one, and I misjudged size so that only the top half of the doors were included. 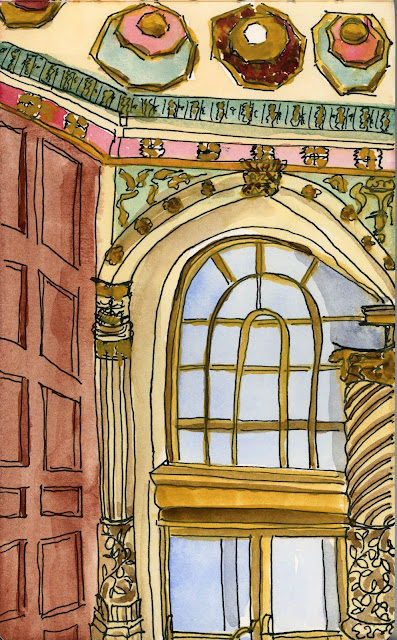 I had found a good place to roost for this drawing, on some carpeted stairs going up to a ballroom, so for my second painting, I simply glanced upward and decided to draw part of one of the fancy wrought iron hanging lamps backed by the even more elaborate ceiling "rosette" surrounding it. I clearly didn't know what I had got myself into with the sheer detail featured in the concentric circles! 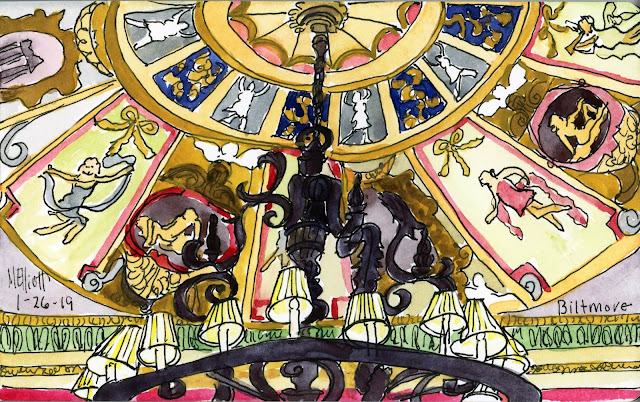 I'm kind of sorry that I introduced any kind of color at all into the lampshades; they were such a pure white, both in color and in illumination, and I wanted them to really pop against the relative darks of the lamp frame and the rest of the background, but I thought the lemon yellow would give them a little more clarity as light sources. Instead, it tended to make them blend in too much.


My third painting, a quickie in the last 10 minutes, was back in the lobby. I found a place on a sofa, and this man was sitting near me, at the end of the coffee table. I managed it by pretending to paint the room's scenery and then taking surreptitious glances. Every time he looked suspiciously my way, I was innocently studying the wall behind him. (Some people don't wish to be drawn!) I liked his frowny-faced concentration on his phone. 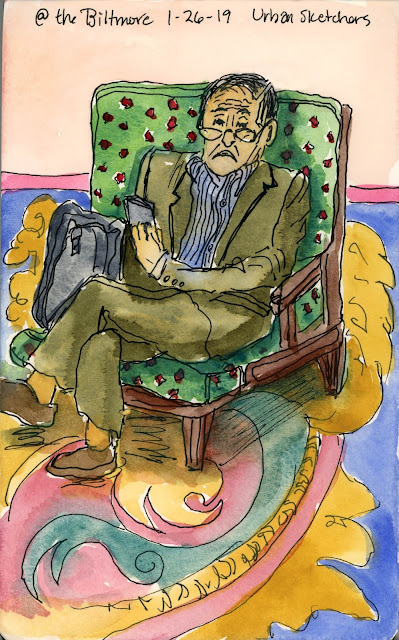 Traffic was horrible from the Valley to the Biltmore, and as usual, I got lost on the way back trying to find a freeway onramp from downtown (those one-way streets!), and finally managed to get on the 101 at Temple and Alvarado, far from where I had started. But it was really fun to go out with others, see what they did, show them my work, and feel more comfortable drawing and painting as part of a group, instead of being the lone person within eyesight who is drawing. Here's a photo of our group: 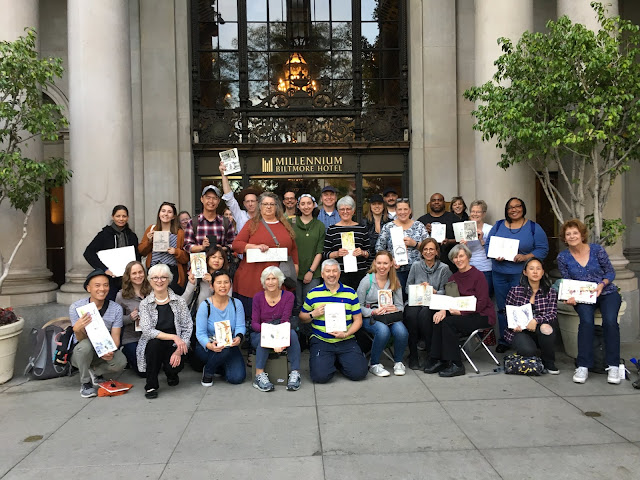 The guy standing next to me in the photo, in the black and red plaid shirt, was in Los Angeles on vacation from (I think he said) Malaysia, and just decided to show up for our sketchcrawl. They have a huge, active group where he lives. Nice to know you can show up in almost any city in the world and find urban sketchers to hang with!