This morning I woke up just in time to make it to the chiropractor's for a tune-up during his one-hour Saturday morning session. After, I decided I'd treat myself to breakfast out. I was trying to think where to go, when I remembered the picture I drew in my sketchbook for Valentine's Day of my neighborhood coffee shop that had never merited a return trip, so I decided I'd give it another try.

Nothing has changed at Heart's Coffee Shop. And I mean nothing! Still looks exactly the same as it did 30 years ago when I moved into this house; still run by two cranky Chinese ladies and a cook; still features mediocre service and dishwater coffee; and still as busy as if it were a much better eatery!

When I got there, no one was sitting at the long counter, but all the tables but two were full. Since I wanted to draw the counter I asked for a table; the waitress directed me to one, but because of the view, I stated a preference for the other. We had to argue about it--she kept waving me to the table with no view in the corner, and I kept waving at the table with a good shot down the counter, in the other corner. Finally she threw up her hands in exasperation and seated me where I wanted to be.

The entire breakfast experience was surreal; seated in front of me was a middle-aged couple who giggled so much throughout their meal that I assume there was some marijuana involved at some point shortly before this breakfast. Seated next to me at four tables shoved together were two families--two couples and their five children--who were devout Christian gun dealers. No, I'm not kidding. I listened to their conversation while I was drawing and waiting for my order to come, and it ranged from how much ammunition they sell during hunting season, what to do to make money in the off season, and how, when they had a disagreement with a vendor, they asked the vendor to "pray on it and get back to us."

I kept my mouth shut and concentrated on my sketch. The food turned out to be okay--the scrambled eggs were dry, the hash browns were well done just as I had ordered them, and the toast was hot with plentiful butter. The waitress glared at me when she saw I was including her in my sketch! By the time I was done with it, a party of 12 had come in and filled up almost every seat at the counter, and an old man and his dog had taken the table where the waitress tried to send me, and were sharing his bacon. I would have loved to stay and make another drawing with the seats populated by heads and shoulders, but people were waiting for my table, so this one will have to suffice. 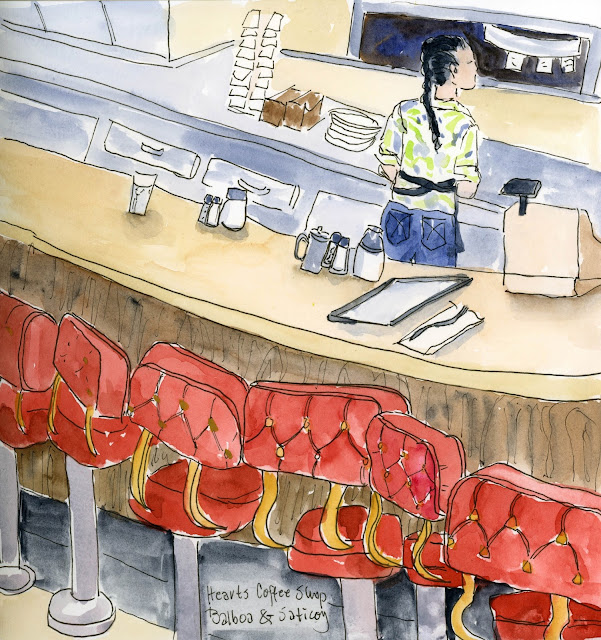 Here is the picture of the exterior: 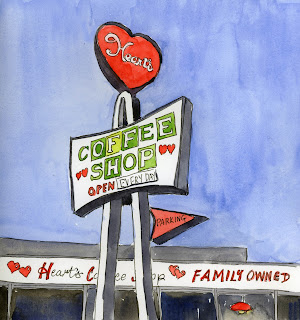 Posted by Melliott at 1:05 PM No comments: