I am so, so bad at drawing small! I want to do a series of scenes from Burbank at postcard size (4x6 inches), and tried my first one today. I intended to fit the entire thing on the postcard, and even pre-drew with pencil so I could tweak it, but still managed to cut off the top of the steeple. Oh, well.

This is St. Finbar's, a Catholic church in Burbank on Olive, near sunset to get some shadow contrast, done from a photo. I made some mistakes of both perspective and proportion, but I think it's still recognizable. I may try it again later—the watercolor postcards I bought are not very cooperative, and I think I may cut my own out of larger sheets instead. 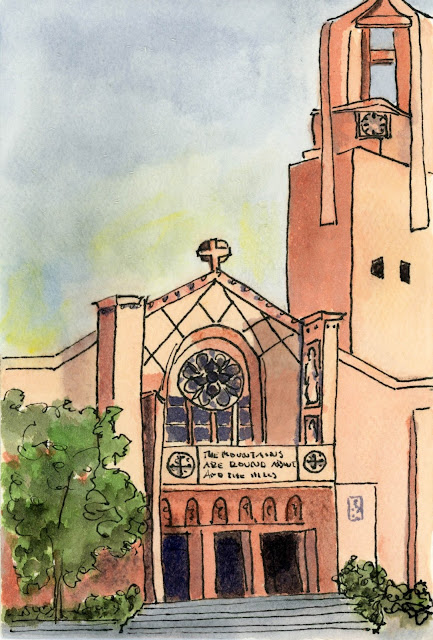 St. Finbar's at sunset
Burbank, California
Posted by Melliott at 7:28 PM No comments:

While on a break from work, I was up in Ventura this week, for an evening and a morning. I was planning to be there an entire day longer, but a sleepless night in an attractive but airless and noisy hotel room followed by an unexpected minor but annoying illness brought me home a day early. I don't regret it that much; a solid eight-hour sleep in my own bed was just what I needed to start feeling better. (I wish I could have kept the dinner date with my friend Barbara, that I made for evening #2, but we will reschedule soon.) But I do regret that the only times I ended up drawing and painting on the trip were at the two meals I ate there! My plan was to spend half a day at the beach and half a day downtown on Tuesday, sketching ocean vistas and perhaps the charmingly small and accessible San Buenaventura Mission. Instead, I captured a scene at dinner on Monday and another at breakfast on Tuesday, and by 1 p.m. I was on the road home. 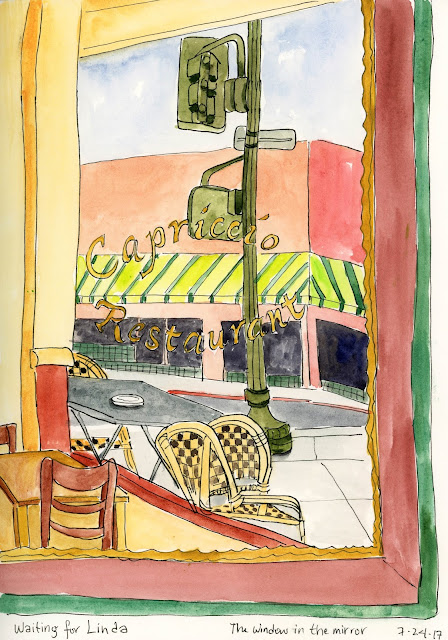 The scene from Monday night's meal was captured while I waited for my companion, an old friend I hadn't seen in years who was passing through and made a dinner date with me. It's a drawing that is hard to interpret without setting the scene: I am sitting at a table against the wall, with a mirror hung directly to my left. In the mirror, I can see the front window of the restaurant, so the name of the restaurant, which is backwards when you look at it directly from the inside, is now right-reading, while everything else is backwards. So I drew what I saw in the mirror. It was kind of a fun challenge. The only thing I don't believe I achieved is any sense that there is both mirror and glass intervening between myself and the view. After painting the scene, I thought of putting a slash through the entire page, lifting the color, to give an impression of reflection, but was too timid to follow through with it. The only thing that gives the impression of glass or layers is the framing, and the fact that the lettering is suspended in front of everything else.

Breakfast on Tuesday was fraught with frustrations. I knew that Cafe Nouveau wasn't far from my hotel in mileage; what I didn't realize until I was too far on the walk to change my mind was that it was all steeply uphill. So when I got there, sweaty and winded, I asked to be seated outside, where it was still cool. I took my reading glasses and my Kindle, supplied with three books for my trip, out of my purse to read with breakfast, only to discover that the Kindle, which I thought held a full charge, was stone dead. I ordered my breakfast, and five minutes after it was delivered to my table, the city started up with roadwork not 10 feet outside the fence surrounding the restaurant. So I asked my waitress to move me indoors, which she happily did, and finished my excellent breakfast there.

Then, bereft of anything to read, I pulled out my sketchbook and made a drawing of the remains of my breakfast. The omelet was already cleared away, but I still had the rest of my biscuit and jam, plus a little plate that came with the bill, with a complimentary small muffin. After drawing, I checked my purse and discovered that I had brought along my mini travel kit: a collapsible brush, a Motrin bottle full of water, and my Altoids palette, with five colors (the primaries plus sepia and turquoise). So I decided to paint the scene on site, rather than waiting until later. Although it was such a limited palette, I almost like the result of this one better than the more mannered painting of the restaurant from the night before, which was completed with access to a full palette of colors. 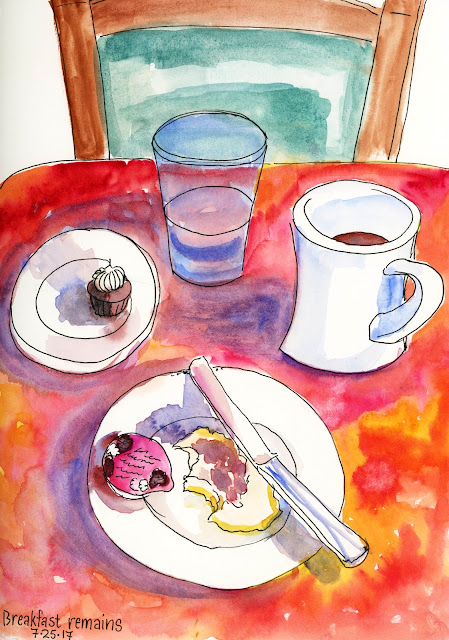 I had neither the time nor the discipline to paint the table just the way it appeared—it was one of those lovely 1950s ones with the chrome around the edges and the bright two-tone linoleum on top, sort of a pinky red combined with a lighter red-orange. But I feel like my random splashes of color captured what was going on there, which was mainly bright! I enjoyed the contrast of the white dishes against it, and had fun with the see-through blue plastic glass.