I have to admit that although I have lived in Los Angeles for 40 years, there are parts of it with which I am familiar, and parts to which I am a total stranger. I went to Pepperdine University, so I know Malibu. I like the beach, so Santa Monica and Venice are regular destinations. I live in the San Fernando Valley and work in Burbank, so I know those well. I commuted to Hollywood for 12 years (split into three batches depending upon the job/employer), over the course of my career. And I've driven through most parts of it, on my way to somewhere else. But there are a lot of places I have never stopped. I went to one of those this morning.

Los Angeles urban sketcher Virginia Hein is going to be one of the teachers at the Urban Sketchers Symposium in Chicago this August. Since I forgot to sign up for that until so late that all the good stuff was already full, and decided against going for that reason (among others), when I saw a post on Facebook that Virginia wanted to do a "dry run" (that's a pun, since it's watercolor) of her class, "The Color of Light in an Urban Garden," this morning at Echo Park Lake, I decided that would be a fun way to experience a teensy part of Chicago without the plane fare. The class was from 9:00 to 12:00, so I got up early, packed up my kit, and drove down to Echo Park, which on a Saturday took me about 20 minutes. (On a weekday? 1.5 hours, probably.)

She was proposing a new way of working for me, which is always both good and awful in equal measure: Good, because I learn something; awful, because I never have much to show for my efforts at these workshops. I'm so focused on figuring out the technique that I mostly make messes I wouldn't show anyone. Which is always frustrating to my non-artist friends--they find out I'm taking a workshop with some talented and accomplished person and automatically expect me to come back having created a masterpiece in a new style. The reality is, learning anything takes time and repeated flubs and missteps, and I never have much of anything to exhibit.

I'm going to be brave, however, this time, and show one of the three sketches that we did. I'm under no illusions that it's any good, but it was a fun morning and I wanted to post about it, and this IS an art blog, after all. Also, I am enamoured of the subject of my painting, a 14-foot, art-Deco-style female statue called "Nuestra Reina de Los Angeles" (Queen of the Angels), more commonly called "Lady of the Lake" by people in the neighborhood. She was sculpted in 1935 by Ada May Sharpless, as part of the post-stock market crash government program called the "Public Works of Art Project" (PWAP). She's a beauty, and I'm including a photo of her from 1937 (courtesy of Los Angeles Public Library) so you can see her true contours. 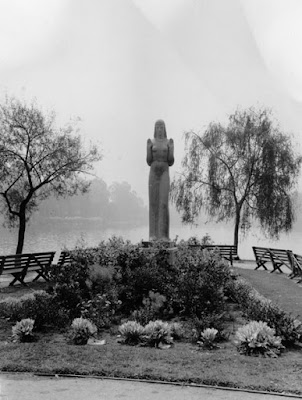 Here she is, in place, and here is her creator, Ada May Sharpless.

And here is my 20-minute urban sketch of her. Our objective here was not to draw first, but simply to put in a few defining lines to indicate focal point and major elements, and then go straight to paint (something I have never, ever done). Our other objective was to squint our eyes to discover the light and the dark, the warm and the cool, the dominant and the recessive, and use just two colors to make our entire painting. After that, we were allowed to use a third color to pick out some highlights or beef up an area of heightened color or interest. 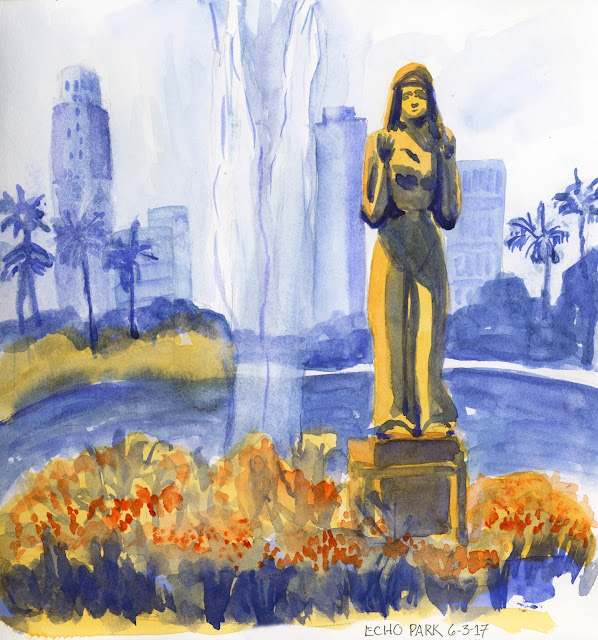 For those not familiar with Echo Park Lake, that column of white behind her is a huge fountain that bursts up in two parallel streams from the middle of the lake to tower over everything. White water on a pale blue sky background is hard to paint!

Now that I have discovered Echo Park, I will make another expedition on a weekend morning to paint some of the other beautiful sights (or sites) I found there. Here are a couple: 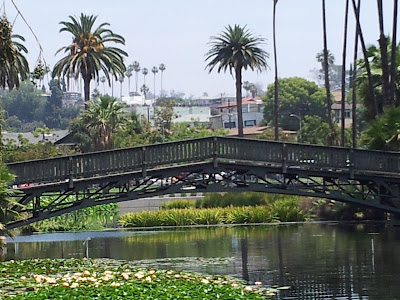 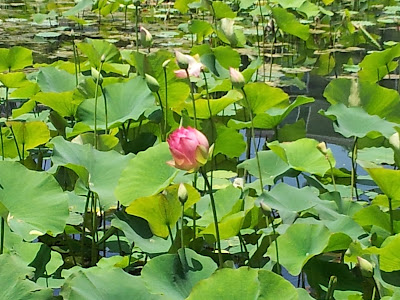 If you're in the neighborhood, be sure to check out the Lotus Pond while they're blooming. They're really spectacular.