Well, I hung in there for a whopping two drawings, and called it a day. I just wasn't having fun. The prompts didn't inspire me, and I got tired of having to sit and cogitate for hours on what I could do to fulfill them; and honestly, although I'd like to be better at those things I mentioned before (cross-hatching, etc.), I don't enjoy them. I like doing what I do, which is making a contour drawing and then giving it personality with watercolor.

Also, unlike the other challenges in which I participated (30x30 Direct, Every Day in June), this one seemed different—competitive, full of one-upmanship, a little mean! There was so much brangling over what constituted an appropriate drawing for Inktober—whether any ink was fine, whether you could use ink like paint, whether you could use color, whether working digitally was okay, and on and on. Some of the people who were following the "legitimate" Inktober prompts talked smack about those who were making up their own prompts, there were a lot of attempts at censorship if people ventured into life drawing territory, and I just got tired of seeing it in my feed. So I bagged it.

Here are the two drawings I did, neither of which was I particularly happy with; and below that is a contour drawing I made and watercolored for pure fun and satisfaction. No comparison.

This was the drawing for the prompt "ring." It's a newly imagined cover for a Georgette Heyer novel. I misjudged the proportions and ran out of room; my original plan was to make it about 1.5 inches taller so I could put the title above the figures and the author below. 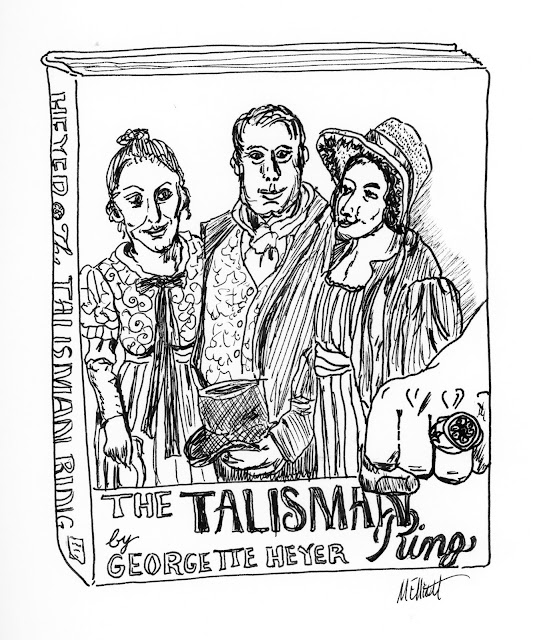 And this below was for day two, the prompt being "mindless." It took me forever to think of this, and it didn't actually express what I wanted it to, which was "less screen time," because the TV is no longer the major offender in this, it's all the trawling on social media! But I had the idea based on an old photograph for "Turn off the TV" week from a decade ago, and went with it. I drew in ink, and then used Tombow markers for the color and tints, and spread them around with water (they are water soluble). Again, not my best drawing. 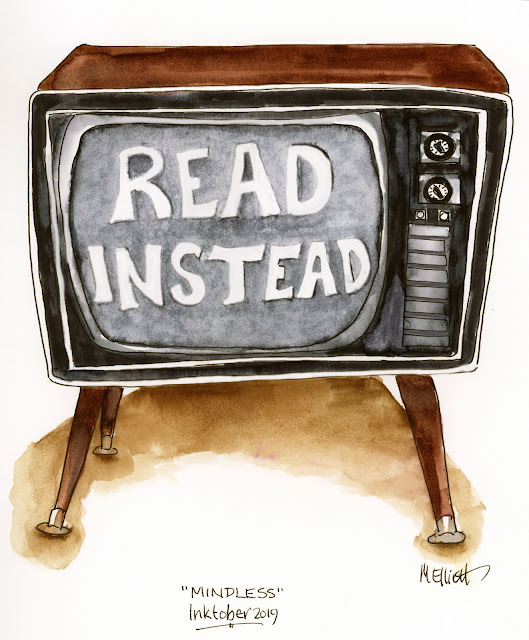 Today, just for fun, I used a reference photo from a trip the cousin of my friend Mika is taking across 48 states in 48 days, and made a painting of "Eric driving the caboose." I made his head a bit too big (he looks a little too much like Paul Bunyan here), and simplified certain aspects of the caboose, but otherwise it's pretty accurate. 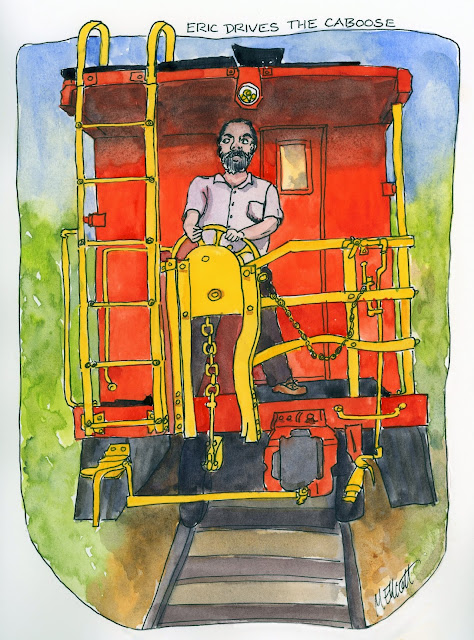 It was fun, I enjoyed doing it, and I'm sticking to my style for a while!