A week ago, on Saturday, I joined up with the Urban Sketchers Los Angeles group (about 15-18 of us, I think), to participate in the 58th Worldwide SketchCrawl by visiting Forest Lawn. Yes, the cemetery. I thought it was going to be the one that stretches across the hillside next to the 134 freeway, but instead it was a whole different site, on top of a hill in the middle of Glendale, and it was quite a resource for urban sketching. There are multiple buildings, monuments, statues, gazebos, you name it, and all of them are interesting architectural or artistic challenges.
I ended up staying quite close to our original meeting place, which was the Forest Lawn museum, and sitting on the steps between the museum and the Hall of Crucifixion/Resurrection, looking out across the parking lot to the rather charmingly rural-looking Church of the Recessional. Several of us took that vantage point, while others turned around to sketch the Hall of C/R or used the statues for figure drawing practice (statues are ideal—they don't move a muscle, and never need a break!). It was a fun morning out—we met at 10:00, sketched and painted until about noon, then gathered on the steps of the Hall of C/R for a "throw down" (no, it's not what you think, it's where everyone puts their drawing or painting down in a group next to one another to see what others have done, compare vantage points, methodology and media, etc.), followed by a picnic for those with the forethought to bring their lunch. I did not, but a kindly member had a whole bag of vegan cookies and gave me a great big one, so I was happy. You can see me in the back row, about sixth from the left, in the photo below. It was a beautiful day for an outing--sunny, clear, and not too hot. 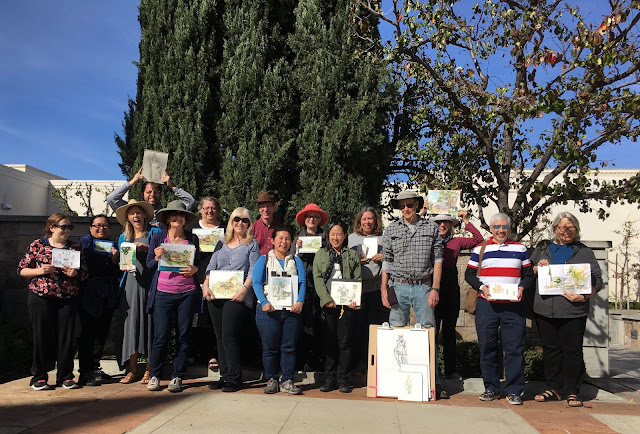 I was also fairly pleased with my work for the morning. It turned out a little dark and muddy here and there, but the thing I was most pleased by was that I managed to mix all these variations of hue from only five colors (red, ultramarine blue, yellow, turquoise, and raw umber), in my tiny Altoids tin palette, using my one portable telescoping brush, and my liquid source was an aspirin bottle filled with water that I brought with me. (I did go and change that once in the nearby bathrooms.) Here is the Church of the Recessional: 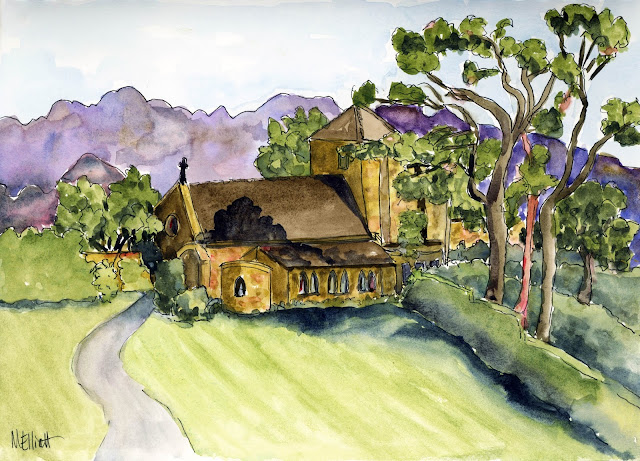 There are, of course, things I would improve: The purple on the mountains shifted abruptly from one side to the other, and I didn't catch it; the front end of the church is on a decided angle not seen in nature; and the tree shadow, despite being just that dark, doesn't look quite natural. But for a 45-minute sketch followed by an hour to paint, I was happy. (I'm pretty slow and methodical.)

There were other really awesome sketches from the day; you can go see them on the USkLA Facebook page, here. We have some talented people in our group!

I'd like to make a return trip to this Forest Lawn site; there are many other things to draw and paint. Perhaps I (or we) will at some point.

I'm particularly happy that I got out and did this last Saturday because of what happened two days later, on Monday night. I was in a car accident on my way home from work; the cars in front of me slowed down, as did I, but the guy behind me wasn't paying attention, and hit me. I saw him coming, so I tried to get out of the way by turning into the breakdown lane, but it was too small and I was too late, and he walloped me hard. Here are pictures of my poor Kia Soul: 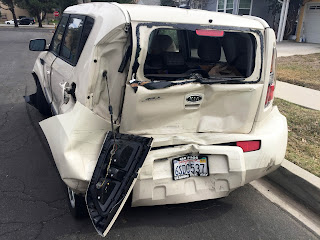 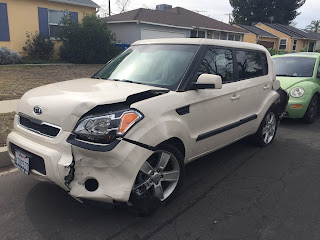 I won't exhibit my own bruises and contusions, but fortunately there was no blood and (most likely) no bones broken (there might be a hairline fracture in my leg). I have been mostly at home since, except for trips to the chiropractor, the orthopedic doctor, and the lawyer, and I think I'll remain home a couple more days. You don't realize, in the first couple of days after trauma like this, that the pain is going to get a lot worse before it gets better, but of course the body protects itself both with shock and with swelling; then, when the shock goes away and the swelling subsides, you get the full force of the muscle, tendon, and joint pain!

So, the upshot is, no art this week except for one little scribble yesterday, when I ended up in multiple waiting rooms during the course of the day with my sketchbook in my purse and decided to document the various types of chairs. I tried doing the impression of shadow with some parallel lines, but I was not as methodical or tidy as I should have been to accurately give that impression. 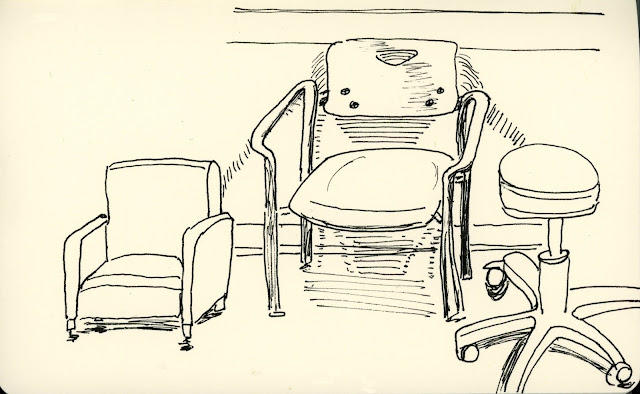 Hopefully, I will be back to drawing and painting soon. I will end this post with the hope that it will make more people stop glancing over to their phone or whatever they do in that split second that makes them miss a change in circumstance. This could have been a lot worse, and I'm really grateful it wasn't; but I also could have gotten off the freeway two offramps later and gone to Trader Joe's on the way home, as I planned, instead of spending the evening fraternizing with police and paramedics and tow truck drivers and losing the use of my beloved car! This is the second time in six years that I have lost my ride as a result of someone else's inattention. I don't mean to be whiny, but I sincerely hope it's the last.