I hadn't mentioned it here yet, but I dropped the class at Moorpark College. The only thing I was really interested in learning was linoleum block printing, but in order to get to that, I had to go through six weeks of intaglio printing. Sanding and incising the metal plates aggravated my lungs, and I didn't enjoy either the process or the results. Also, I found out the teacher was going out on pregnancy leave before the lino-cutting part of the class was due to begin, and knew nothing about the substitute, so I decided to bail. I figured that sooner or later a class or workshop would come along, and two weeks later, I was rewarded with one!

There is a "book arts" track for the library masters degree at UCLA, and one of the things the Horn Press student group does is offer workshops throughout the year to MLIS students. One of these popped up on the UCLA listserv last Monday, and what do you know, it was a linoleum block printing workshop! I didn't know that staff weren't technically invited, so I signed up and went; fortunately for me, the president of Horn Press this year is one of my Readers' Advisory students, and Yoonha was gracious about including me. So I got to make my first linocut.

We each were given a piece of gray lino material and a tool, we had a short safety lecture about the best way to use the tool without cutting ourselves, and then Yoonha said "Think of an image or find one on Google, and give it a try!" I opened up my phone and googled "raven," because I'm always and ever fascinated with the mighty corvid, and drew an image in pencil on the lino.

Here is my "plate" that I carved. It's a hot mess: I carved out things I shouldn't have (like the feet); I didn't know at what angle to hold the tool, so some of it is gouged almost to the lining while other parts aren't deep enough; I carved out the background at various angles, thinking none of it would show (but it all did); and because we were running out of time, I was unable to empty out the entire background (shoulda made the bird bigger, I kept thinking) and had to leave a "vignette" with some of the lino untouched. 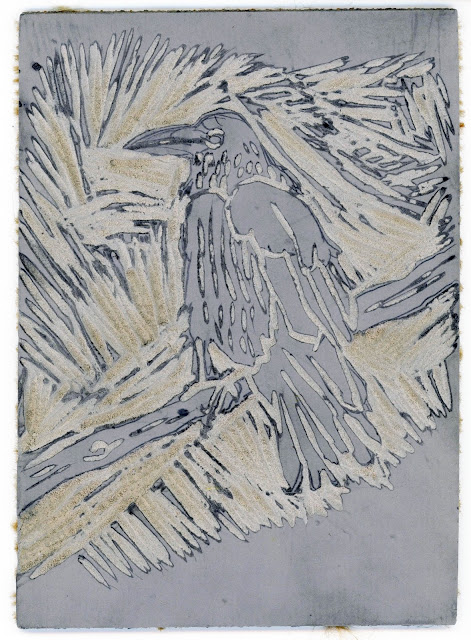 And here is my one and only print I made from it. It is likewise kind of a mess: I got the plate crooked on the paper, I smutched a couple of times out in the margin, and the dark gray ink I used makes it seem a bit faded and maybe not inked enough. 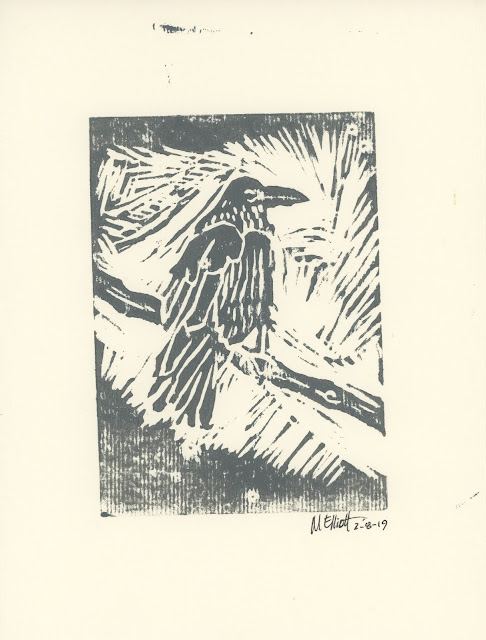 But you know what? For all of that, I am inordinately proud of it! It was a really fun experience, one that I hope to repeat soon. It makes absolutely no sense to spend hours gouging something out of rubber that I could easily paint better and faster in another medium; but I loved it. Yoonha nicely complimented it by saying it looked like original woodcuts from the 16th century, which I understood as "primitive and amateur," but I still didn't care. I had fun!