The art of work 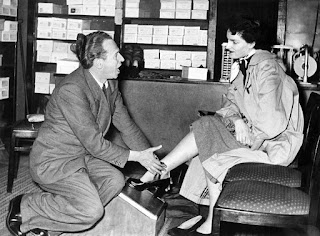 This blog post isn't about a work of art, it's about the art of work. I am officially about to sound elderly, because I am going to bemoan the good old days. Specifically, whatever happened to the shoe stores of our youth? To the shoe salesmen and saleswomen who took pride in their work? The ones who asked if they could help, listened to what you were telling them you needed and why, measured your feet, brought out an array of shoes in your size that might fill your requirements, helped you into the shoes with the aid of a handy shoe horn they withdrew from their pockets (above), checked the length of the shoes and judged whether your toe was too far forward and "we might need to go up half a size," then cheerfully boxed and bagged everything up and wished you well? What happened to those people?

For the past few years, especially since I injured one knee and the other one got angry at me for having to overcompensate for its shortcomings, I have pretty much lived in athletic shoes. Saucony and New Balance are my brands, because they come in wide widths. I have difficult feet. They are short, they are super wide, and the insteps are unusually high. That makes me hard to fit; and I need a specific kind of support for the knees as well.

So I have a pair of Sauconys in dark gray that will go with gray, black, and shades of blue, and I have a pair of white New Balance that will go with most everything else. I have felt the lack of something to go with shades of brown, and have been meaning to go find something, but shoe shopping in its current day incarnation is kind of a nightmare. If you don't want to spend a lot of money (and who does? unless you're in Italy), then you go to some warehouse place like DSW, where there are long aisles of waist-high shelves with shoes displayed on the top counters and various sizes of same residing in their boxes in the cubby holes below. You troll up and down the aisles, looking first for something in which you'd be willing to be caught dead. Once you find that shoe, however, you are constrained by whether the store has it in your size; and in my case, I am further stymied by whether that manufacturer makes a wide width and, further, whether this particular store carries it. Many a time I have spent two hours in one of these places and left with a token pair of socks. And when I have bought shoes, they are usually not exactly what I would have liked, but rather whatever would fit and not be too objectionable. At least, I consoled myself, they were cheap.

So, I've been getting along with my two pairs of running shoes until the Burbank City Manager, in his infinite wisdom, decided that city employees weren't dressing up to their full potential, and massively revamped the dress code. Most of it didn't affect me; I tend to wear dresses or skirts, and have many nice outfits that are perfectly adequate to a teen librarian's wardrobe. But the shoes...oh, the shoes. Suddenly we are not allowed to wear running shoes—that is, nothing with a discernible logo (strike one), and nothing with a weird color on the body or trim (strike two—my gray ones have a turquoise tongue and piping). While we are not required to change to anything as draconian as heels or pumps or even mary janes, the serviceable shoes we choose need to be in basic colors—black, gray, navy, brown, maybe a tasteful beige—and as inoffensive and anonymous as possible. 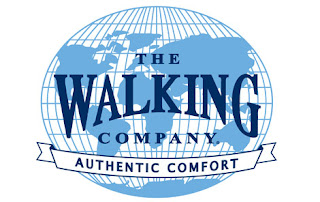 Time to go shoe shopping. I knew I wouldn't be finding what I needed at DSW, so I faced the fact that I was going to have to spend some serious cash to get some decent shoes. I headed to The Walking Company. And this is the point at which I started to bemoan the days of yore when shoe salesmen gave a shit. Seriously.

I walk into this place in an upscale mall in Sherman Oaks. There is one salesman on duty, and there are two women he is already in the midst of helping. He turns to me and says "What do you want." I say, "I'm going to need to buy a few pairs of shoes and I have some rather particular needs, so why don't you finish helping those ladies first." He stands there and stares at me. Then he says, "Okay, look around," and turns back to the other women.

When he finishes with them, he goes around the sales floor picking up all the shoes they had tried on and returns them to the back. He comes back out and I expect him to approach me, but instead he walks around the entire circumference of the room, tidying up all the displays. Finally, I walk over to him and say, "Can you help me now?" He replies, "Yes, what do you need." No smile, no indication that he is at all interested in the fact that I said I needed to buy a few pairs of shoes. I'm assuming (maybe I shouldn't?) that these sales people are on commission. The Walking Company sells pretty much two brands: Abeo, and Dansko. Both retail for somewhere between $99 and $149. So we're talking serious commission here, if he can simply bring himself to sell me some.

I say, "My employer has changed our dress code, so I need to buy some shoes that give me the support of a running shoe but without obvious logos and in subtle colors. I also have a high instep, and need a wide width, so I'm kind of hard to fit."

At this point, he cuts me off. "We don't carry wide widths. You have to order them online." And then he turns away!

I say to him, "I bought a pair of Abeo sandals here once, and they were wide." He replies, "Oh, yes, the sandals come in wide widths." Full stop. So I show him three pairs of shoes (one a sandal) in which I'm interested. "No, I don't have that one." "I have that in black, maybe. But no wide width. You can try a bigger size and see if it works." "No, I don't have that."

Finally, I say to him, "Have I offended you in some way?" He kind of laughs, and says, "No, why?" I reply, "Well, so far you have told me all the reasons why you can't help me, you haven't offered any solutions, you haven't asked me what size I wear or measured my feet..." He replies, "Size 9? I'll go get those shoes now" and goes in the back.

He brings them back, sets the box down next to me on the bench, and walks away to the counter. I pick up the box, open them up, lace them, try them on, discover they are not wide enough (naturally), and probably too short. I ask him, "Do you have these in the next size up? I think they're too short for me." "No," he says. "Do you think my toe is too far forward in these?" "I don't know." "Can you check?" He looks at me like I'm insane, and then leans down and stares at my foot. "Maybe."

The whole time all of this is going on, I'm thinking, These shoes retail for $100 up. I've had better service at DSW from the minimum wage teenagers they hire. What is this guy's problem?

I decide to buy one pair of walking sandals. I'm not even sure they qualify under the dress code, because they do say "ABEO" in tiny letters on the velcro strap. I'm going to check.

I then ask him to write down the names, numbers, and sizes of the shoes I tried on that I liked but that didn't come in wide widths, so that I could go online and order them. He looks at me like I had asked him to sacrifice his first-born on the shoe-rack with a Brannock Device.

Just as I was about to leave the store, a new customer was entering. Another salesman had just come on duty, apparently back from his lunch break. As I passed the woman, I said, "Talk to HIM," and pointed at the other salesman. After all, he couldn't be worse...could he?

Oh for the good old days of Thom McAn.