I have a Facebook friend named Lynn who is absolutely outraged (as are many of us) by both the existence and status of immigration detention camps. But Lynn has taken several steps beyond posting memes and venting on Facebook.

First she made a series of art pieces, captioned drawings about the camps, and posted them in our open forum for Sketchbook Skool artwork. Then, when a few sour apples complained that they didn't want to have to look at political stuff in the place where they come to be inspired, political posts were banned there. Undeterred, Lynn kept posting them on her own page, and those of us from Sketchbook Skool who wished those complainers had just acted like grownups and scrolled on past if they didn't want to look (as I do every Easter when someone inevitably paints a picture of Jesus with nail holes in his hands!) followed her to her own page and offered further encouragement.

Lynn then found a group she wanted to support, a bunch of women called Angry Tias and Abuelas who are bringing supplies—food, drink, clothing, and legal aid information—to the people at the border in the Rio Grande Valley, so she offered to trade some of her quilting work for donations to their cause. She made a set of four coasters for one person and, having seen them, I asked her if she would make me a nice thick quilted potholder. Being Lynn, she made me two! They are in the mail on their way to me, and now her requests are piling up. 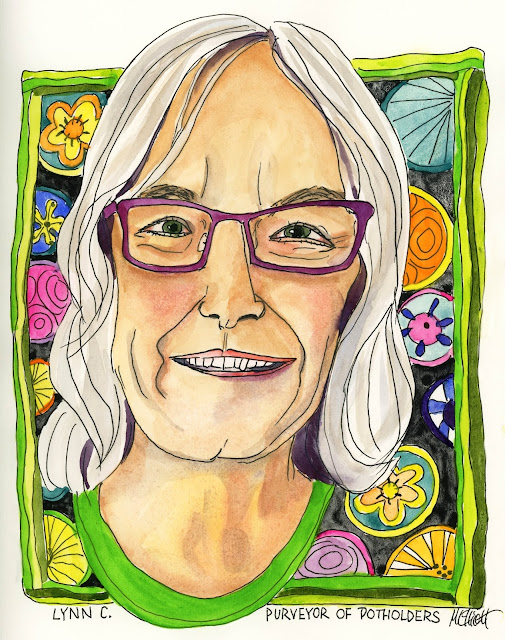 Although it's a little bit like coals to Newcastle since Lynn paints self-portraits a few times a week, I decided that it wouldn't be unwelcome if, as a thank-you to Lynn, I did a portrait of her as well. So here she is, with one of my new potholders as background. As usual when I draw in ink, some proportions are unable to be fixed after: The nose is a little too long, the forehead a little too high. But I think there's a likeness, and that her happy spirit shines through.

Thanks, Lynn, for being so concerned about the world, and so generous as to encourage others to pay attention by gifting them with your art as an incentive.

If you would like to contribute to Angry Tias and Abuelas, here is their website.  I would also like to encourage you to call your congresspeople and express your outrage and IMPATIENCE with this situation, and to donate to legal aid societies for these poor people. Here is a pro bono South Texas organization. Move On has a petition you can sign to close down the camps, here. Let's all do what we can.

Seeking asylum is not a crime.