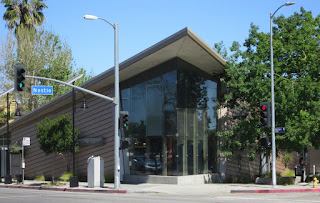 I decided to take a break from working on my next lecture for class yesterday afternoon and head to the Encino-Tarzana branch of the Los Angeles Public Library to look it over. I usually go to the West Valley Regional Branch, but I stopped there on Tuesday to check out something to read and was underwhelmed by their offerings.

I also had an ulterior motive in mind; usually, libraries are good places to practice your urban sketching of people, because they are so focused on whatever they are doing—reading, working at the computer, or just looking fixedly at their phones—that they are easy to draw, staying in one position for prolonged periods, and sufficiently engaged that they don't notice you staring at them as people sometimes do in a café. So I brought along my Moleskine and a uniball.

Alas, it was not to be: The moment I walked in, I was approached by a woman who used to be a regular patron at Burbank and who recognized me from there; she wanted to reassure herself that she wasn't going crazy and that I did indeed work at Burbank. I mumbled that I used to, and tried to disengage, but she kept the conversation going with observations about the paltry nature of LAPL's branches, the superiority of the Burbank Public Library, etc., and then tried to ascertain why I was there—did I live nearby? I wasn't going to answer THAT, so I politely excused myself and headed over to the teen section for refuge.

I decided, as I usually do when visiting a teen section at an unknown library, to take photos, in case I want to share them with students later on. I took three of the collection, and then turned to the seating/computer section to take one more, but was informed loudly by a man sitting in the section that he didn't consent to me taking his photo. I explained that I wasn't even looking at him, I just wanted a photo of the space, so he looked down and covered his face with both hands, I snapped the photo, and I thought everything was good.

When I left the library 20 minutes later, the man followed me out to my car to tell me that it wasn't cool for me to take pictures of him without asking his permission. I explained that it was a public place so he should have every expectation of his likeness being saved, by security cameras if by nothing else, and he retaliated by whipping a pencil and piece of paper from his pocket to write down my license plate number. Yeah, good luck with that. I guess quitting my library job still wasn't sufficient to get away from the "eccentric" people who apparently inhabit every branch in Los Angeles.

Anyway, I still wanted to sketch, so I paid careful attention on the way home and spotted this vintage liquor store sign. I found a parking place in a large lot across the street and managed to do 95 percent of the drawing before someone decided to sit behind me and honk their horn to let me know they were expecting me to move and give them my space, even though I had given no sign of leaving. I didn't; and they eventually gave up and went away, not without roundly cursing me out through their window. Sometimes it seems like a high price to pay to get in a little sketching that is intended to be relaxing and creative!

Here is the sign, positively larded with neon. It must be a fun one after dark.
Uniball, Moleskine journal. 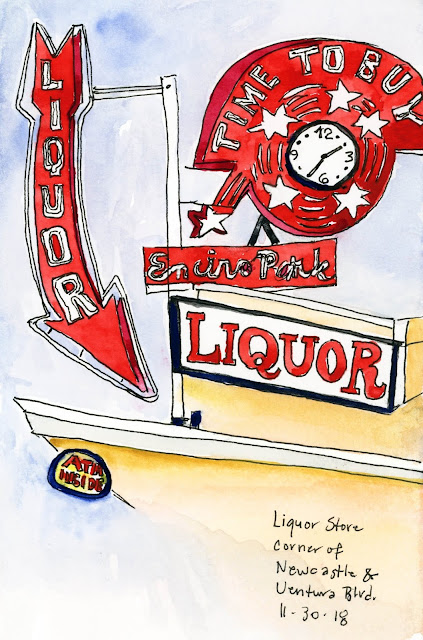 Posted by Melliott at 5:32 PM No comments:

Some of the people who came to SketchKon proposed a virtual "meet-up" tonight between 4-6 Pacific time (most of them are back east or central, so later for them) to try our hands at painting Pasadena City Hall again, this time from photos. I decided I was game, and found a photo from high up in the Westin Hotel when we were there for the weekend. Here is the photo: 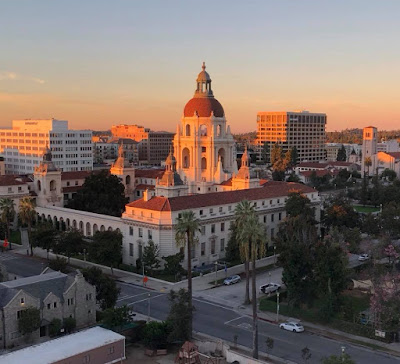 I decided to stick with my current theme of continuous-line contour, which means drawing everything you can without lifting the pen from the paper. It makes for some interesting empty spaces in whatever drawing you are doing—City Hall looks like a castle in the sky. I made the contour drawing, and then tried to capture those yummy sunset colors from the photo. 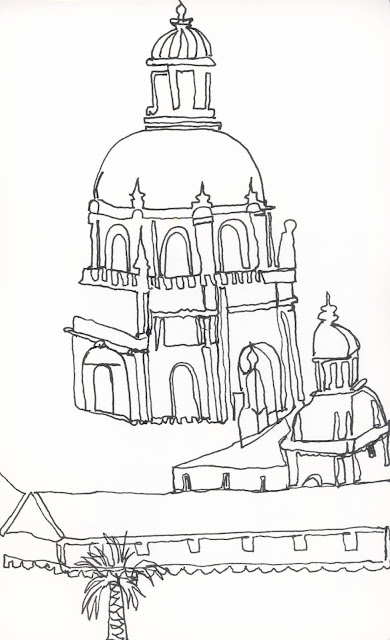 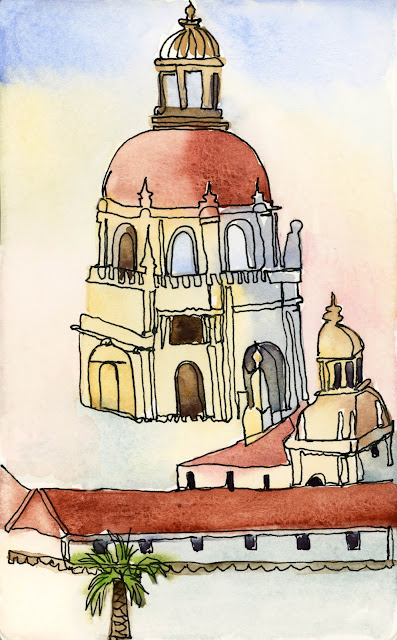 I am enjoying revisiting continuous line contour—it lets you be free to be wonky without worrying too much about perspective (or anything else). This was fun, we'll have to do it again!