I have previously expressed my frustration with continuing to feel limited by the circumstances of healing from this accident, but yesterday was a new low. It's a holiday weekend, and I want to be out in it, taking advantage of the lovely weather, meeting friends for breakfast, doing some urban sketching, taking on a project. Instead, yesterday was a day of persistent low-grade headache, previously uncatalogued contusions making themselves felt as the swelling goes down, and forced inaction, reading a book that isn't captivating me or trying to find something to watch on TV. 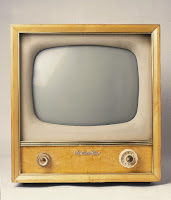 Parenthetically, as a person who was born in the 1950s, and lived for half my life with only 13 channels, you would think that subscriptions to HBO and Starz and Hulu and Netflicks, not to mention all the cable TV channels out there, would yield multiple options, but for some reason yesterday nothing suited me, and I channel-surfed restlessly. I was in such a foul mood that I picked a fight with a family member on Facebook, got all righteous, and did the equivalent of slamming the door (CNTRL Q) before sitting down and sulking some more. (Sorry.)

I finally concluded enough was enough, and decided to do what I needed to do, which was to get out of my own head by doing some drawing and painting. I didn't have the energy or the brainpower to take on something complicated, plus it was almost 4 p.m. and I would be losing the light on the patio (my favorite work space) in an hour or so, so I plunked down three apples on my patio table, did a quick and basic contour drawing in pen, and then set about watercoloring them.

The conclusion, an hour later, wasn't pretty: Messy, with color problems and overworked shadows—I couldn't have done a worse job if that's what I had set out to do. In desperation, I tried flicking some "confetti" paint over the whole thing to make it look festive, but it didn't; so I swished through all that with clear water and ended up with faded-out speckles behind my caricatures of apples. 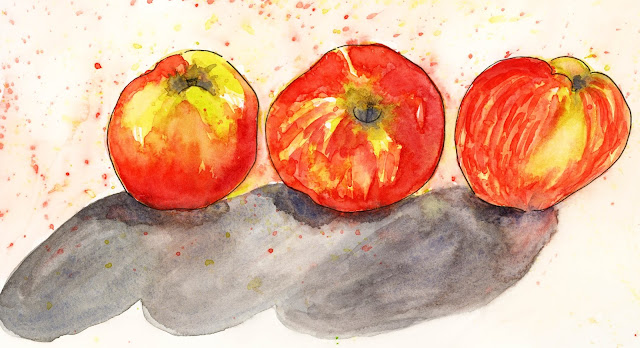 I'm posting it anyway, because it did what I intended it to do: Got me out of my funk. I woke up today with a much improved attitude, and after breakfast, reading, and some Facebooking, I decided that I could well take on some projects if they were small.

First, I came up with a concept for a recipe I want to illustrate to post online on theydrawandcook.com. I made a list of all the ingredients, decided what item I would illustrate to go with each one, and began a preliminary layout. That wore me out for a while, so I read quietly for another half hour, but I wasn't satisfied any more to just sit still. 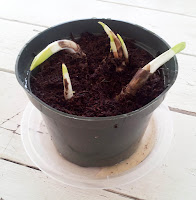 So...next I planted a pot of paperwhites for the kitchen. I had bought one of those Christmas kits for someone and forgotten I had it when it came time to give gifts, then discovered it later in a pile of stuff, so I rehydrated the soil, planted the bulbs (which had already begun to sprout inside their package), watered, and set them in the window. 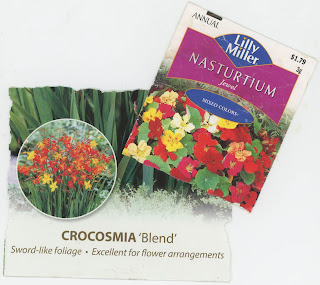 This inspired me to do a small bit of gardening in the yard. In that same pile (from the nursery), I disovered some nasturtium seeds and some Crocosmia bulbs I had bought that I thought would be interesting to plant in the bed together, since the nasties grow low while the bulbs are tall and spiky, and they have similarly colored blossoms.

I went outside, found a pair of flip-flops and my big garden fork, and dug up the small bed that fronts my patio, then planted the bulbs at intervals (I had 18), followed by the nasturtium seeds, then watered it all in, changed back to my slippers and came inside. It took about 25 minutes, start to finish.

I am now nicely tired, rather than fretful, and am going to make myself a late lunch and read my book, able to feel like I am making more progress than just sitting up! Bad apples have their uses.