I have to admit that I expected this year's women's march to be somehow less than last year's. Last year we were all in shock from the results of the election; we were pumped up with righteous indignation that "that man" had just been inaugurated; and we marched to feel like we were at least doing something, and doing it with a lot of other likeminded people.

This year, I wondered if it would be undertaken out of sentimental reasons—the "second annual" syndrome—or as an opportunity for those who didn't show up last year to come so they could say they had. I think I fell victim to all those trolls on Facebook who mocked us and our signs and our pink hats. I shouldn't have doubted, and I should have realized, based on my own activism during the past year, that it wouldn't be that at all.

Listening to the speeches delivered by a wave of impassioned, determined, emphatic, brilliant women, who talked about everything from Black Lives Matter to Me Too to Time's Up, in addition to all the concerns we had previously embraced, and who chanted and sang and cried and hugged and threw their fists in the air, was inspiring and energizing. Looking at the sea of determined faces who spent this past year calling, emailing, texting, tweeting, and writing postcards to their senators and representatives, no matter how futile it felt, who were out there yesterday to say "It's 2018! Get out the VOTE!" and being able to celebrate with them some of the victories of good, progressive candidates (including a lot of women) over the business-as-usual guys and, let's face it, a stray child molester or two, felt good.

I was inspired to make a drawing of part of Pershing Square to commemorate the day. I made sure to get a shot that showed the inclusiveness of the march—dads with babies, protesters of all ethnicities with their own personal messages, and a few pink pussy hats scattered throughout. Now I can't wait until next year, when I am hoping we will have much more significant wins to celebrate. 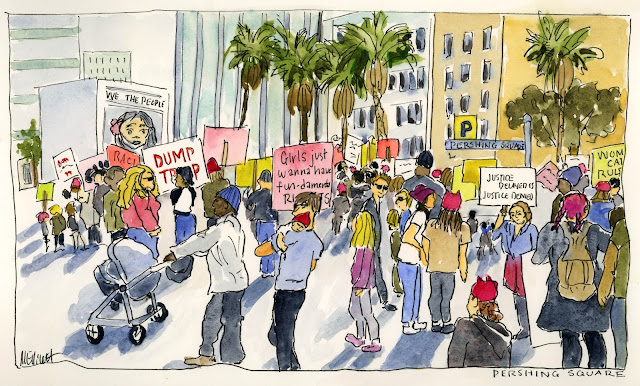 Micron pen #5, and watercolors.
Posted by Melliott at 12:45 PM No comments: