Not really, although sometimes Burbank feels like another country. People in Burbank who have lived there all their lives have a weird dedication to the place. I mean, I've lived in Van Nuys (admittedly a whole different ball of wax when it comes to almost everything) for 35 years, but apart from a certain fondness for my immediate neighborhood, the idea of loyalty to "my" city seems pretty absurd to me. But there are people in Burbank who won't go to a restaurant or a hairdresser outside the city borders. I mean, I'd understand if it was, say, Paris...but Burbank?

Anyway, with this sketch I guess I'm expressing the same sort of parochial behavior, because instead of finding a photo of something from Japan to paint, I chose to paint the teriyaki and tempura place down the street from my library. (I did throw in the cherry blossoms as a nod....) I'm a vegetarian, so I don't go to "the Yak" much, but they do make a nice veg and tofu stir-fry, when I'm desperate for lunch and only have half an hour to spare.

The odd thing about this place is the concept of "drive-thru." There is no order window like there is at a fast food place; instead, you drive up to a window at the side of the indoor counter, you place your order just like you were standing at that counter, and then you sit in your car and wait for it. The window is screened, so somebody has to run your order out to your car and take your money. I can't imagine being patient enough (lazy enough?) to sit with my car running (or sit three cars back from the front) for the entire time it takes to make a tempura platter or five--why not just come in? But there is a constant line of cars next to the building every day. 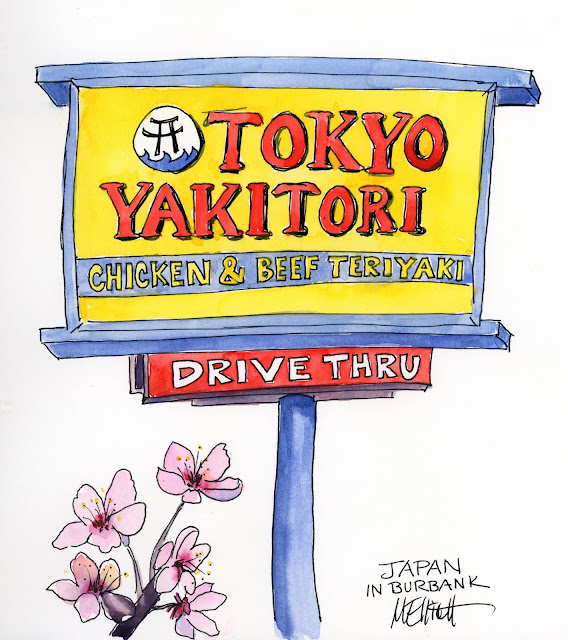 I drew this with a Uniball pen, which surprisingly didn't smear, and painted with watercolor. Oh, and this one is for Suhita Shirodkar--although I can't approach her atmospheric drawings of odd signs around town, she's the one who inspired this idea.

Do you think it's true that you make better art when you have an affinity for the subject matter? That people have a particular aptitude, say, for still life, landscape, figure art, and struggle with other subjects? Or does one talent eventually lead to another...but only if you branch out and try them?

I haven't done much in the way of landscape--most of my paintings and drawings are "set pieces" wherein I set out some objects on a table and draw from life--a book, a candlestick, some lemons...so when I discovered that Every Day in February was a travelogue, with a painting "from" each location to which we virtually travel, I was both reluctant and excited.

Also, there are some countries on the list of "Every Day in February" to which I have no desire to go, no particular curiosity to discover more about them. Then there are others that I think of as part of my eventual fate--one of the many dreams that we start out with in our youth:

"I'd like to be a book editor and live in an apartment at the heart of New York City."

"I'd like to have a farm in the Cotswolds and raise horses."

"I'd like to be an architect with an office right on the boardwalk in Venice Beach, and roller skate to work."

"I'd like to learn French and become a pastry chef in Paris."

"I'd like to live on the water somewhere and have a little boat to potter about in."

The countries that have figured especially large in my daydreams (apart from various places in the USA) are Greece, France, and Ireland. How fortunate, therefore, that when I came (late) to the February party, two of my first three drawings were set in the lands of my affinity!

While there are many aspects to Ireland (small villages, bustling towns, countryside, ocean cliffs), here is one wherein we inhabit a tiny cob and thatch cottage at the edge of a lake, with a handy rowboat tied up nearby.

Drawn with LePen, painted with watercolor. 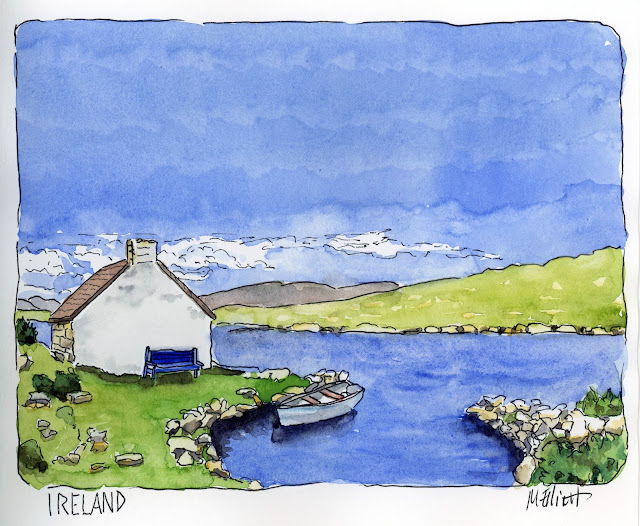 Today's travels were to take me to Haiti. There are lots of things that are sad about Haiti, particularly after the earthquake, and there are also lots of things Haiti's landscape has in common with many other places, so I wanted to find something distinguishable. The most beautiful thing about Haiti has to be its people, so that's what I decided to sketch. I loved the photo of this woman in her sassy coral-pink skirt, striding along the road with her giant bundle. Thanks to the unknown photographer who provided the source material! 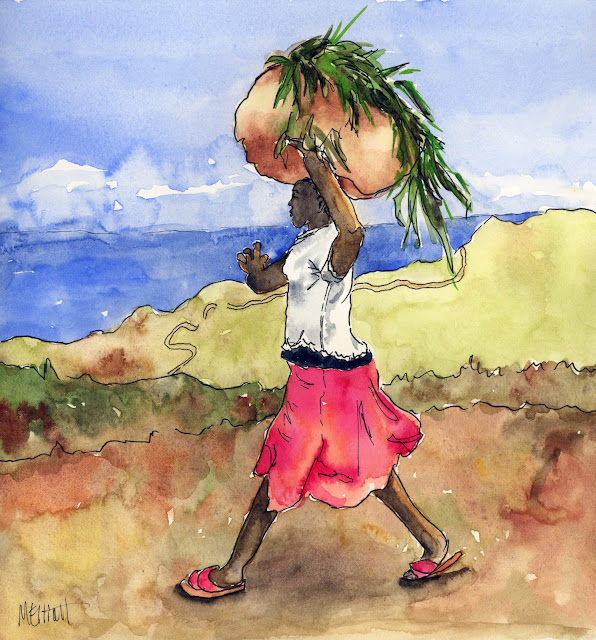 This is drawn with LePen, and then watercolored. I had a little trouble with the perspective on the arms, with the result that her left arm is emerging from her armpit instead of extending from her shoulder, but otherwise I was happy with it. I painted the entire background first, let that dry, and then did the woman and her bundle, leaving the coral skirt until last.

Another country tomorrow! This is fun.

Every day in February, and Tea

I finally got back to sketching via Liz Steel's teacups. I decided to try a few myself, and while they don't come up to her standards, I can see the fascination with trying different things--water soluble Tombow markers, painting without drawing first...I'm sure there will be more to come.

The first one is Tombow marker, and I realized, since it was soluble, that I'd better not draw the parts that I wanted to stay true to color, so I stopped with the marker and just painted from this point on. Things still got a little muddy--should have quit five minutes before I did. 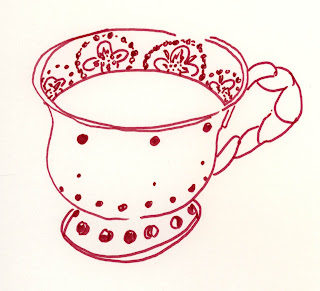 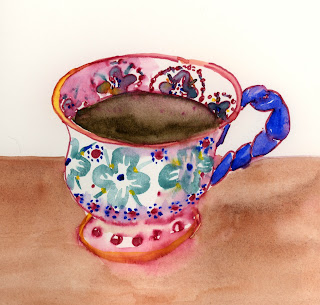 This one was going to be a drawing with a new (also water-soluble) fountain pen, but I couldn't get the pen to work. I don't know if it's old ink (who knows how long these things sit on the shelf?), if the paper is clogging the nib, or what, but I got a few strokes out and that was all she wrote, so to speak. I gave up, drew this with my faithful Micron pen, and then painted. 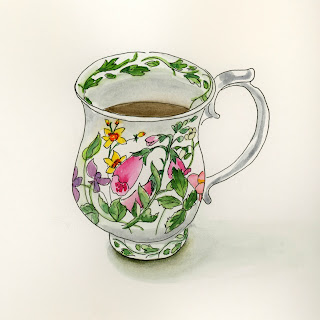 Yesterday I got curious about whether there was an "Every Day in February" exercise (a little late!). There is. The theme is "travelogue," and each day is a country. You can paint anything to do with that country's landscape, flora and fauna, culture, or what have you.

Today, fortuitously, was "Greece," where I have always wanted to go, so I took a painting trip to Santorini. The intricate cluster of buildings on these cliffs is daunting when you dwell on each individual nook and cranny, so instead of doing that, I tried to squint and get the basic shapes. I penciled everything in lightly, painted, and then erased most of the pencil lines. It's not entirely a success--I think I needed to go a lot darker with shadows to provide more contrast for that bright whitewash--but I think it captures the feeling of the intensity of the light on Santorini.

I doubt I'll be able to keep up with the daily paintings, but I'll drop in when one is particularly appealing to me. (Ireland is coming soon...) 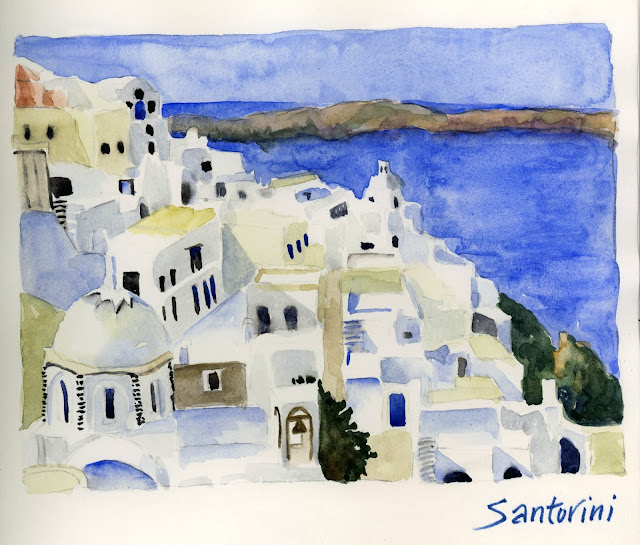