I've been so busy that I haven't done much drawing or painting lately, so this morning after breakfast I decided to paint a quickie of the book I'm reading--I like to do that for books I'm planning to review for my teen blog, so I have artwork to go with my post.

This is the third book in the YA "Boy Nobody" series by Allen Zadoff.  Except that it's not called that anymore, now it's the "Unknown Assassin" series. Confused? We who buy books for the library were confused as well!

Zadoff initially released the first book as Boy Nobody, which we bought; but then he realized it would be a series, not a stand-alone. Since the sequel was to be I Am the Mission, his publisher talked him into a re-release of the first book, calling it I Am the Weapon, calling the third book I Am the Traitor, and changing all the covers, so that's what he did. So we have both Boy Nobody and I Am the Weapon on the shelf, and it's the same book.

My suspicion is that the publisher wanted to distance it from another YA book, called Nobody, by Jennifer Lynn Barnes, which is also about a boy assassin!

I did this one in pencil, instead of the usual pen, before painting, so it has a softer look. The colors blended so nicely on the original that I wanted to try that in my watercolor. I tried to erase all the pencil afterwards, but some erased and some didn't. I ended up going back in with sepia pen in a few places, just to pull out some detail on the lettering. Otherwise, all watercolor. 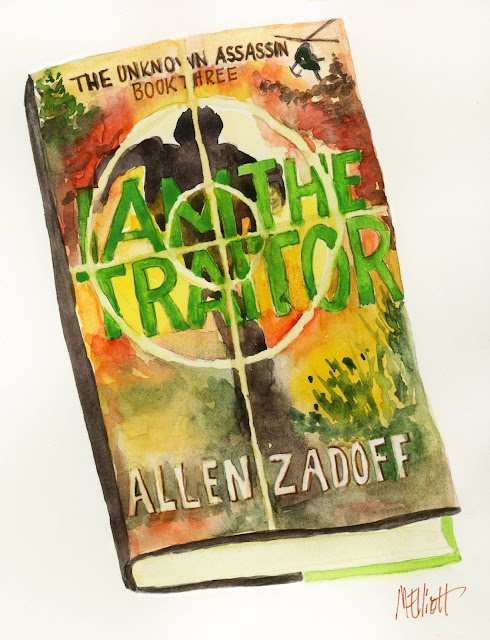 Posted by Melliott at 5:00 PM No comments: