So today is supposed to be chore day, starting with dishes. I washed one drying rack full (15 plates, one bowl, four cups), and then discovered that all my tea towels for drying were missing or dirty. So, leaving those to air dry, I put a load of towels in the washer, and cast around for something else to do while the rack of dishes dried and the towels washed AND dried. I decided that, rather than embark on some other chore that would get complicated and ultimately sour me for continuing the dishes once I was able, I would instead paint something. As an inveterate slob, I will take any excuse to avoid doing housework...

My gardenia bush just burst into glorious blossom, and smells divinely outside my bedroom window. I decided I'd paint a vase of gardenias. Since they are white, I decided I would do a negative painting of sorts, by doing the background dark so the flowers would stand out. So instead of drawing in pen, which is my usual habit in my sketchbook, I drew in pencil, then erased until I could see the lines fairly lightly, and began. 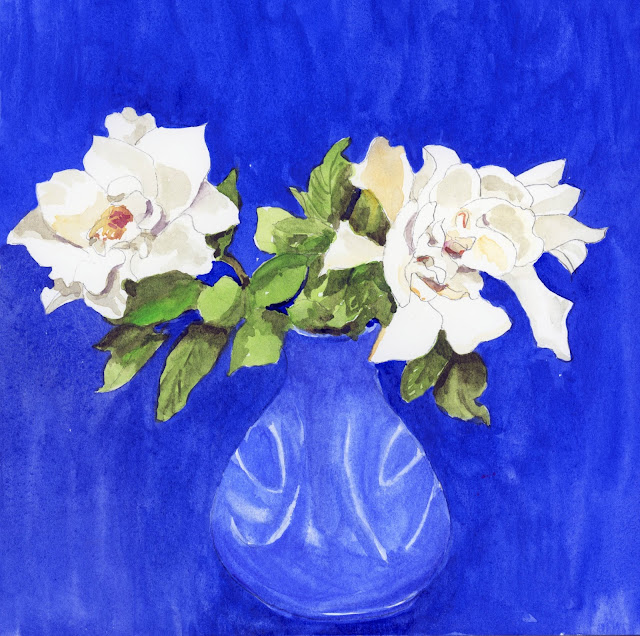 I'm pretty happy with how the gardenias themselves turned out, but I was so anxious to get to them that I shorthanded some things that I shouldn't. The vase in which I put them is pottery, and although it's dull, it does have some shine and sparkle in the light, but I left out the highlights. It also has weird markings that are white because wherever they are scored into the clay, the paint didn't follow, but they are really hard to translate in art. In retrospect, I wish I'd left some simple highlights and left out the white lines. Also, although gardenias are soft and almost chalky in appearance, with few highlights, the same cannot be said of their leaves, which are all colors of extremely glossy green, and there, too, I neglected to leave the highlights that would make them sparkle. If I had been working on watercolor paper instead of in my sketchbook, I could have lifted some; but this paper isn't that forgiving. And similarly, the paper in the sketchbook reacts differently to big washes of color, and it was impossible to maintain "the bead," the all important wet line at the bottom of your wash that allows you to continue it top to bottom without it looking scrubby. So there are lots of things wrong with this little painting.

If I hadn't determined that this would be the day I would have a clean kitchen, I would have retried this on watercolor paper; but after having put away the first, dry rack of dishes and washed another one...after having taken the towels out of the washer and put them in the dryer...and after having cooked myself a nice lunch (onion and mushroom frittata with parmesan) and messed up a plate and a glass again, I can't refuse to confront that kitchen any longer.