They say that whatever you do on New Year's Day is the precursor to what you will do during the rest of the year, so I decided to get in a wide spectrum of behavior today, to include all the things I both want and need to do.

First up was a walk at the park (Lake Balboa), accompanied by my small sketchbook and a micron pen. The walk part was fairly short (but still symbolic of daily exercise to come, right?), while the two sketches took a bit longer. This first one was happenstance—my lower back tightened up, I sat down on a bench to relax it for a minute, and was presented with a really nice tree specimen, with a little dog and a fisherman standing underneath it. By the time I got to the part with the fisherman, he had disappeared back into his car to listen to music, apparently, while eating his mid-morning snack, so the dog (patiently waiting for his person) had to be the entire star of the show. Yes, he is wearing a plaid coat. 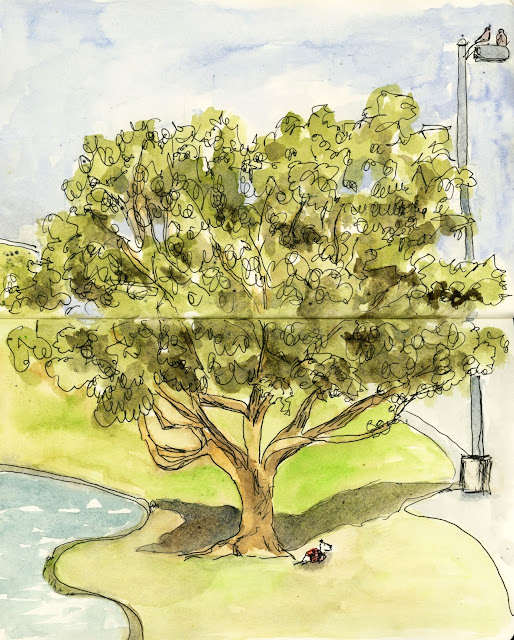 Then, a little ways further around the lake, I decided I wanted to try painting a panorama of a portion of the lake and shore, so I found a bench that provided a good one and made that sketch. 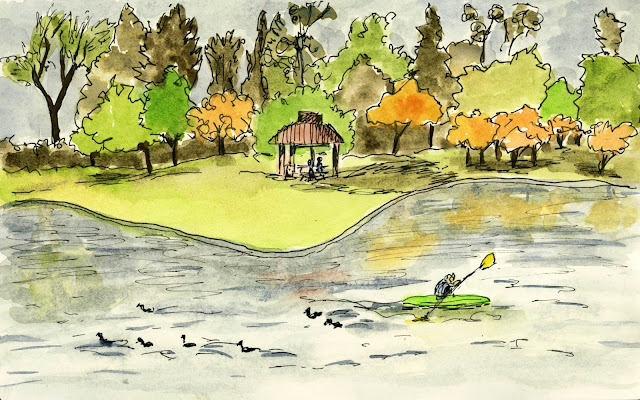 Next up was breakfast at home, followed by watercoloring the two sketches I made. 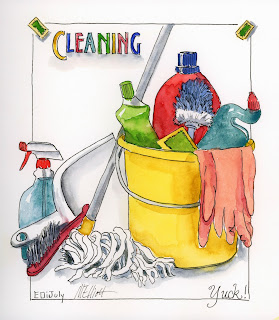 Plans for the rest of the day: Finish the major project I started early this week of cleaning up and cleaning out my kitchen (you can see the primary sentiment I feel for that kind of project in the lower right corner of this drawing from last year).

Once it's clean I intend to mess it up again (only temporarily) by putting a nice big pot of potato soup on to simmer. While that cooks, I'm going to work on an ongoing project on my computer (a class I plan to teach later this year). 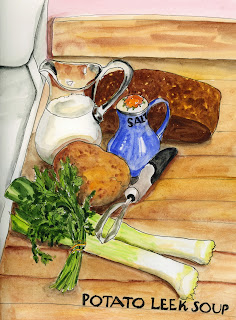 And when the soup is done, I plan to wrap up the day with a bowl or two, accompanied by a good book!

I thought that sounded like an excellent master plan for the new year.