They have a little carnival set up in the playground at St. Bridget's of Sweden Catholic Church, up the boulevard and around the corner from my house, this weekend. It's not often you get the opportunity to draw and paint something like that without driving a long way to find it. So I got up at 6 a.m. (because it will be 100 degrees by 9 a.m. today), packed up my sketchbook, watercolor paper, brushes, and paints, and went up there to do a little en plein air painting. 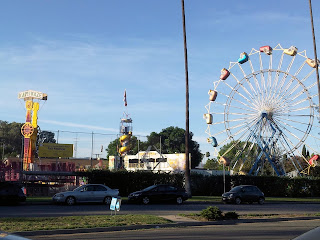 My intention was to do some preliminary pencil sketches to get a layout, and then do a "real" painting (i.e., large and on watercolor paper), but that's not exactly what happened.

First of all, it was hard to find a good place from which to paint. There was no convenient low wall to sit on, and because the church's playground borders on a main boulevard with lots of traffic, I didn't really want to sit on the dirty sidewalk across the street and inhale fumes from the passing cars. Closer up, though, I couldn't see the bottom half of things for the vine-covered fence that borders three-quarters of the lot. I actually went inside the "fairgrounds" for a bit, but then the carnival people came out of their trailers and started setting up for the day, giving me looks that, had we shared a language, would have translated into "Get out of here now, weird lady, you're in the way," so I did.

I settled on a view from out in the alley, sitting on a handy electric box, and got out my pencil and sketchbook. I tried sketching one of the two Ferris wheels twice, but I simply couldn't pull it off. This is when I find out how bad my drawing skills really are: When it comes to a couple of items sitting on a table, no problem; I can look at the contours and get them right. But a large scene, in perspective, with lots of detail? Hopeless. First the wheel was too small in proportion to the "cars," and then I had the opposite problem. And as much as I would like to be an artist like Milford Zornes, who I once watched capture the profile of a Ferris wheel with about 20 quick strokes of a brush filled with a beautiful mix of burnt sienna and ultramarine, I am not that free. Being painstaking as I am, however, isn't getting me very far! 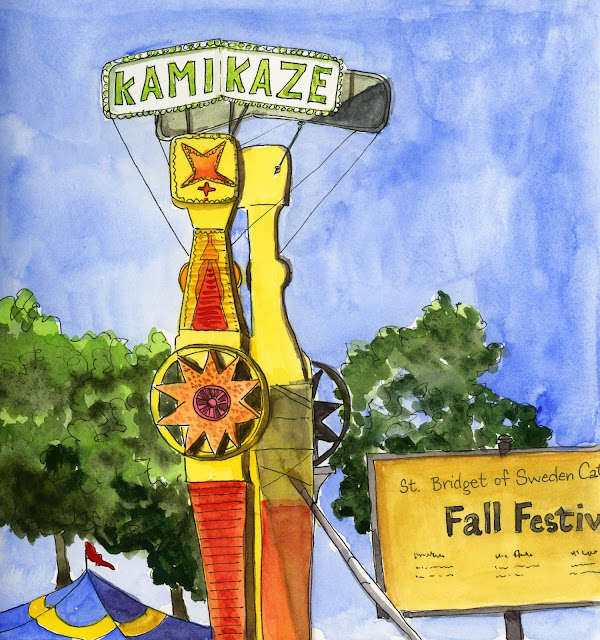 I finally gave up on those pesky Ferris wheels. I walked all around the grounds, crossed the boulevard to the other side for a different perspective, and also walked down the side street, photographing the scene from all angles so I'd have reference photos for later.

Then I got out my pen and did a contour drawing of the relatively simple Kamikaze ride in my sketchbook. I watercolored it, then packed up and headed for home! There may be a carnival scene in my future, but it will take some measuring and a lot of practice sketching before I get there.