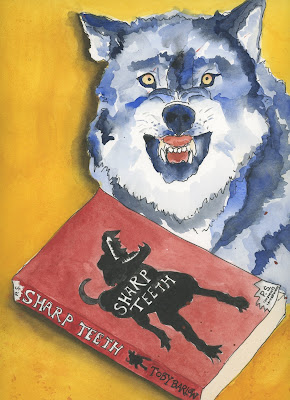 Well, I darkened up some elements, and then I tried the spatter, but because I've never done it before, it came out more like arterial spray, which was a little too graphic (despite the fact that there probably IS some somewhere in the book), so I painted most of it out and added in a deep yellow background, as well as some shadow elements. I'm going to crop it tightly and give it as a gift to the girl who suggested the book for six months in a row, finally got it voted in as our choice, and then was disappointed. Maybe it will make up for it a bit.

Thanks for the suggestions, everyone!
Posted by Melliott at 9:54 AM No comments:

Frank Eber mentioned Joseph Zbukvic with great admiration, so I decided to have a look. You should too...truly a master.