Today is the last day of the Los Angeles Plein Air Festival, and the only day on which I was available to participate. I signed up for it and fully intended to attend, but…it's 105 degrees out there! No hat, no umbrella, no bottle of water, no icepack in my bra will counter standing out on baking asphalt for three hours trying to capture a scene in, hello, watercolor? which will dry on the brush before it gets to the page!

Also, my right knee has arbitrarily decided that it doesn't want to be part of my mobility system today. So I stayed home in swamp-coopered bliss, an Arnold Palmer in my fist. There will be no exciting vistas of downtown Los Angeles on view today. Maybe in December when it finally, finally cools off?!

I did, however, paint a picture of this coming week's book club books. Now I need to (re)read them. 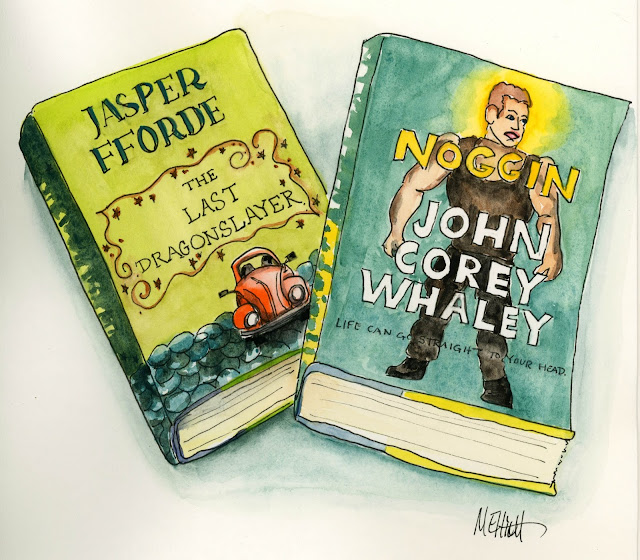 Both are, by the way, delightful in their own way. I lost my head for Noggin (heh heh), and The Last Dragonslayer has two sequels, just to prolong the fun!

On Sunday, my actual birthday, I decided to push myself to do something unfamiliar and a little scary: I went to downtown Los Angeles to go out with a plein air group that meets to paint on city streets the first Sunday of every month.

I have tried going out to paint with other groups that I discovered on Meetup, with variable success. I find that there is too much time talking about painting without actually painting; or someone knows "the perfect spot" to set up but can't quite recall where it is, so we wander for more than half of our allotted time and only get 20 minutes for an unsatisfactory sketch before the venue closes; so I have avoided these groups for a while. But I really want to get myself out of the rut of setting up "tableaux" for myself on my patio table, and instead go paint "in the wild." So when I went to the website of the Los Angeles Plein Air Festival and discovered that a group was going out the Sunday previous, I thought I'd get my feet wet by trying that out before committing to the full-on festival experience.

I think it may have been just a concatenation of circumstances that are unlikely to reoccur, so I will try it one more time before giving up, but as a first urban plein air experience, this one was…disappointing.

The group (as is the Festival) is sponsored by the Main Street art store Raw Materials, and the people there were nice, but uninvolved. I showed up at 1:30 (the stated time), and was the first one on the list to do so. The woman at the cash register checked me off, handed me a little "goodie bag" (nice!) and turned away; I said, "This is my first time, what do I do?" She told me the guy who was leading the group was "around somewhere--that's his stuff, over there," so I went and parked my stuff next to his stuff and waited. After about 15 minutes, two other women showed up, looking as lost as I felt, and confided that it was their first time too. In another 10 minutes, the leader, John, came back from Starbucks and said vaguely, "I guess we should get started." So we went out to the front of the store, and he started unpacking his kit and setting up his easel.

At this point, another woman arrived, and she turned out to be a friend of the regular leader, Alex, who had asked his friend John to fill in for him. The light dawned--this wasn't the person who usually leads the group. Anyway, he showed us his kit to give us an idea of what he brings along when he goes out painting. Then he says, Okay, so you have your kit, now you have to find something to paint! The fourth woman says to him, I have no experience drawing or painting, could I still do this? He responds, Sure! and proceeds to do a demo for her (in oil!) by painting a nearby locked bicycle on a small canvas. After about 10 minutes of this, I got bored (and I couldn't see the canvas because she was hovering at his side), so I drew a picture of the bike myself. 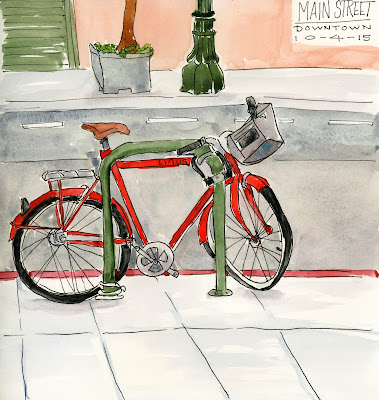 When he finally finished his demo, he says to all of us, Let's saddle up and head out now! and the woman to whom he had been addressing all his remarks says, "Oh, I have an appointment in half an hour, so I'm not coming along today." ! ! !

We walked three blocks over and two blocks down to Broadway. No one but John had an easel, so Broadway was a good place to set up, since there is a series of giant planters on which we could rest ourselves, our palettes, and our canvases or paper. At this point, John starts his own canvas. I ask him a few questions about how to capture perspective, with the ascending and descending lines, and how to simplify the incredibly complex scene into a doable painting; his reply was, Oh just jump in and paint, you'll get the hang of it. Thanks.

I won't be posting the painting here that I did, because it's a big fat mess; but I did get an idea of what things I may need to learn by practicing them at home before I go back out into the big wide world. They involve a ruler and a viewfinder for sure, and a closer study of some of my idols of urban sketching and/or plein air painting (Nina Johansson, Iain Stewart, Thomas Schaller, Keiko Tanabe, et al.).

On a happier note, that evening I had a lovely dinner out at the Cheesecake Factory with my cousins Carol Sue and Kirsten, and on Monday, my friend Kirsti cooked dinner for me (and her husband Aaron, and Kirsten), which was scrumptious and finished with a fabulous chocolate pie. The selection of dessert was considerate of her, since my mom, who passed away in 2010, used to make me one every year for my birthday, and I haven't had one since. So this painting is for Kirsti: 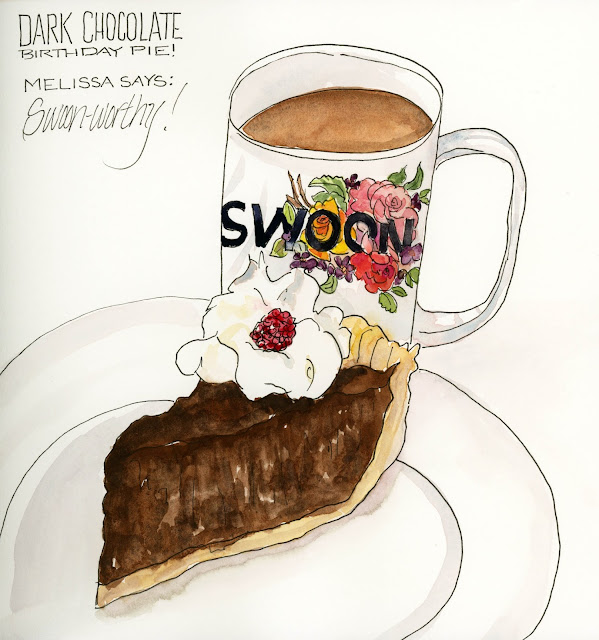 The mug in the background is printed with the logo of hers and Kirsten's new blog, The Swoon Society (SWOON = Stuff Worthy Of Our Notice), and the pie definitely lived up to my swoon-worthy criteria. (Check out the blog for all the other worthy Stuff!)

Happy Birthday to me!

Posted by Melliott at 1:19 PM No comments: 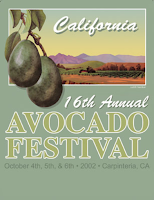 On Saturday, my cousin Kirsten and I took off at 8:30 a.m. up the coast towards Carpinteria, where the annual Avocado Festival always takes place on my birthday weekend. I've been to it half a dozen times with various people; I always look forward to going, and I always remember it fondly, but there is always a moment in the day when I think, Why, exactly, do I keep coming to this?

One can, after all, only eat so many things laden with avocado in a single day; the "artist" booths are, let's face it, filled with stuff that is for the most part too cheesy for me to want to buy; I dislike crowds, heat, and noise, all of which are the norm for an outdoor festival with food and three bandstands; and it's more than an hour away.

I think part of it is the venue: Carpinteria is as charming a little town as you'd find anywhere along the California coast. I enjoy the nostalgia of memories from childhood: My parents and I spent three or four summer vacations there when I was between 8 and 12 years old, hanging with their military friends, and I, an only child, was delighted to have many children to play with for that one week. I like walking up and down the streets, fantasizing about living in one of the small bungalows a few blocks from the beach, being the town librarian, selling my paintings in the cooperative gallery on Linden Street. I enjoy being near the ocean, appreciating the occasional cool breeze that stirs the heat-laden air of the festival. I get a giant kick out of the avocado dioramas created by the town's school children! 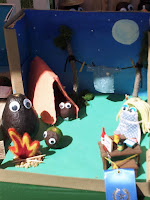 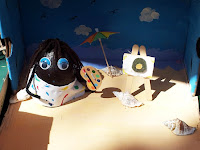 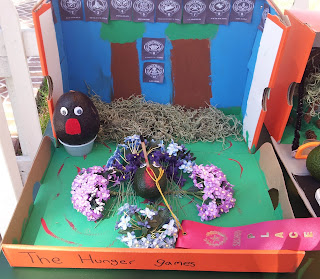 And Saturday, I enjoyed a wonderful breakfast with Kirsten at Esau's Coffee Shop, bought a garlic grater cunningly disguised as a ceramic saucer, and stole a moment to rest my feet and draw. 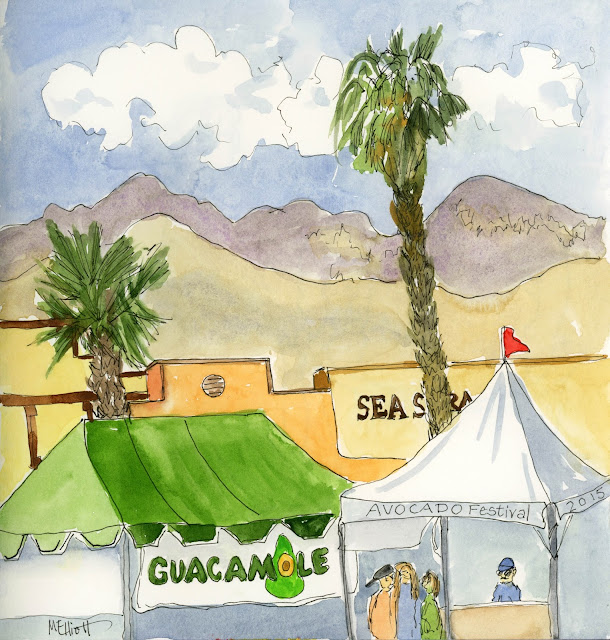