Each weekend, I'm slowly working through the drawings I need for the brochure and all the flyers for "Teen Meetup in the Burb." Last weekend, I only managed time for one, which I had intended for our finale, an Open Mic and Karaoke event, but I may paint something else, as I received all kinds of second guessing about the gender of the person holding the microphone and decided maybe I'd better do one with no one in it! I will probably use this for the brochure, since it reads well small, and do the other picture for the flyer--I'm planning an empty stool and a microphone sitting in a spotlight. 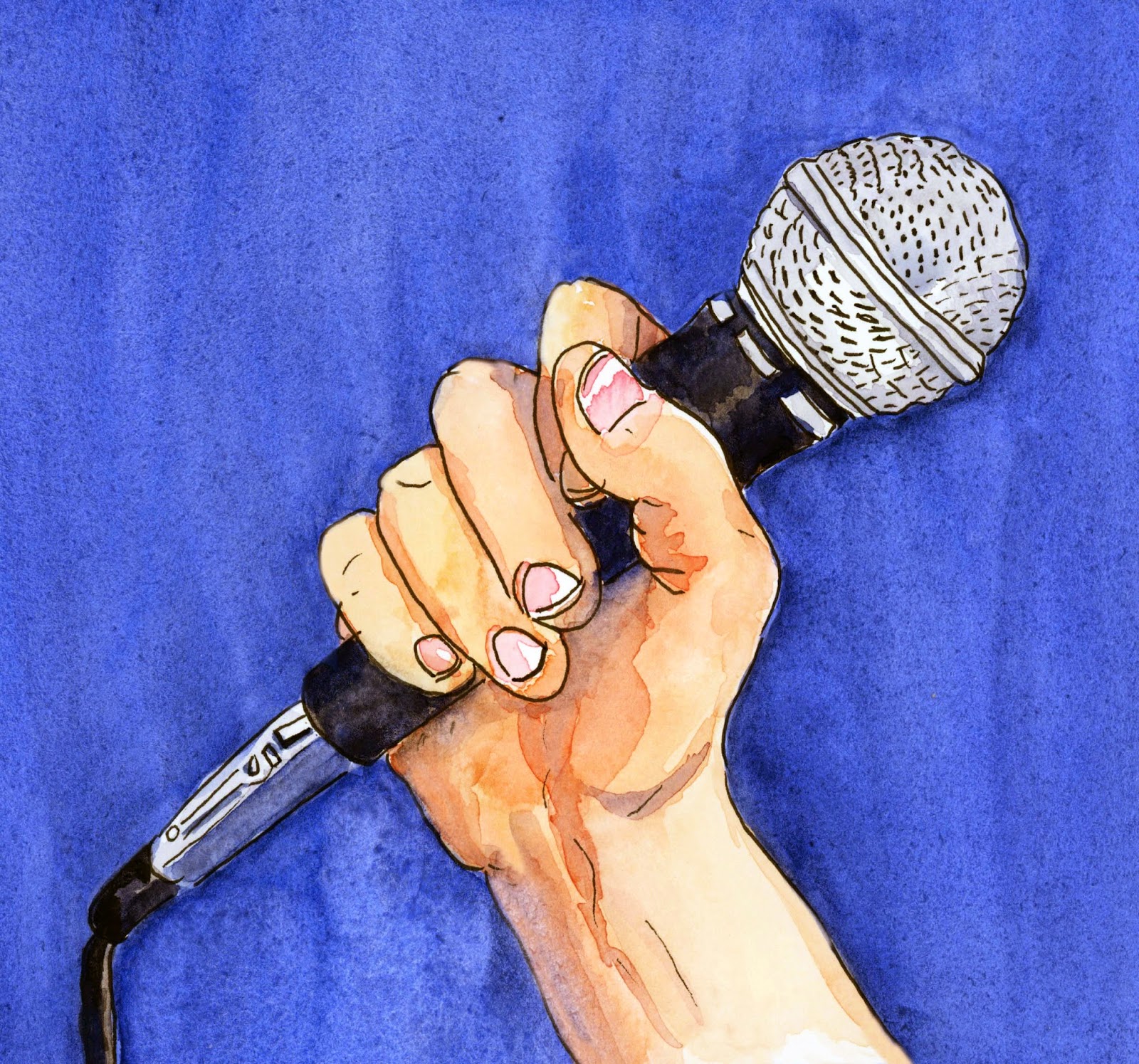 I finished two more this weekend--one for the Sketch Journal we are asking the kids to keep for six weeks, and the other for our music program--the band Flood Zone, who will be playing in the park one night at our smallest branch. 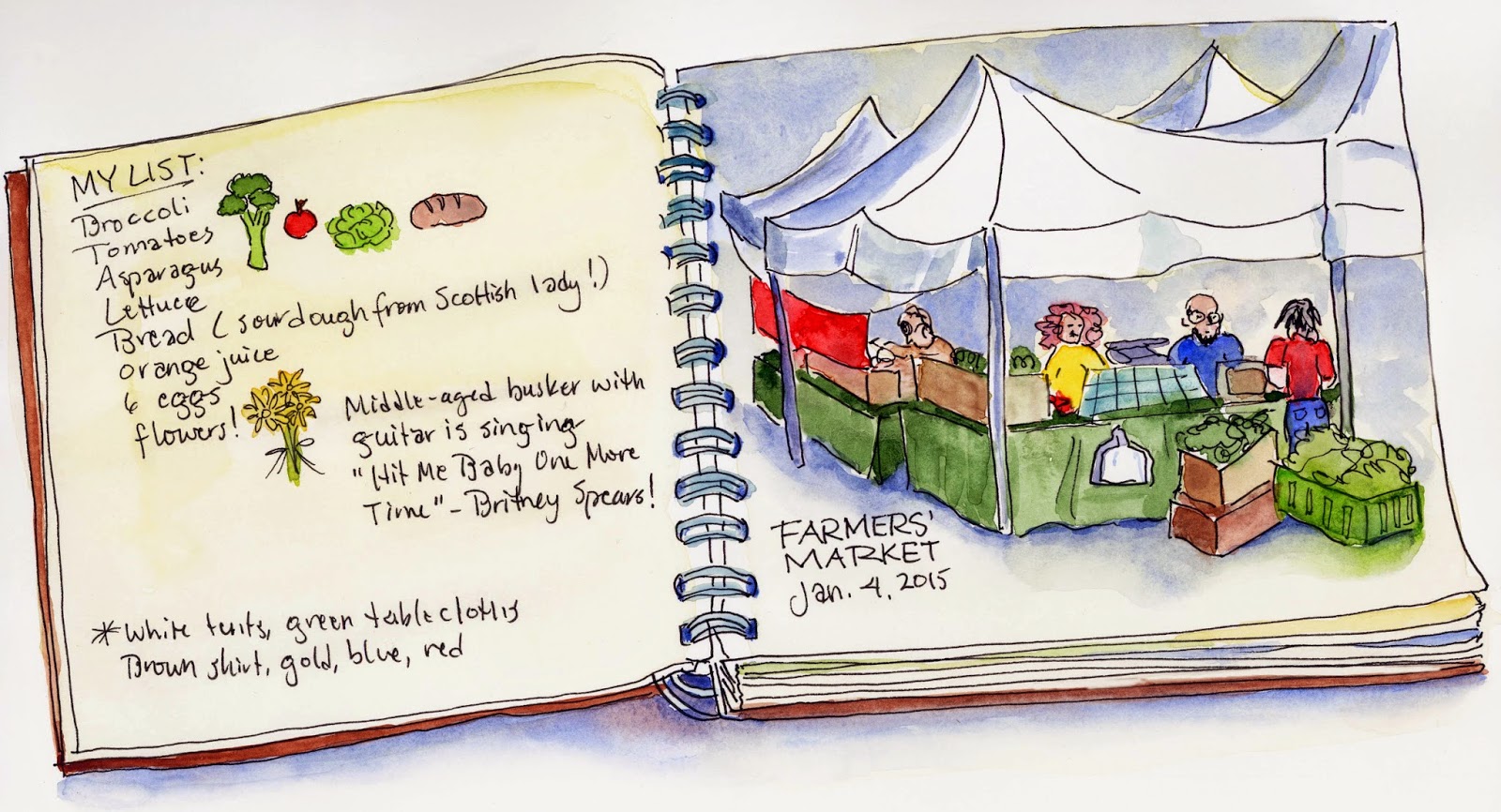 The sketchbook one was a bit tricky--I had to draw a picture of a picture I drew in my sketchbook, along with the whole sketchbook! I picked the Farmers' Market picture as being simple and colorful and a good example of sketching while you're out and about, and also included the opposite page, which had my grocery list for said Farmers' Market, plus some commentary about a funny encounter, and a few notes about colors so when I got home, I could watercolor my drawing. We are teaching a short seminar to get the teens started on their sketchbooks, as well as a small sketch crawl meetup for them. We will go out as a group and sketch around downtown Burbank for two hours. I'm really looking forward to this! 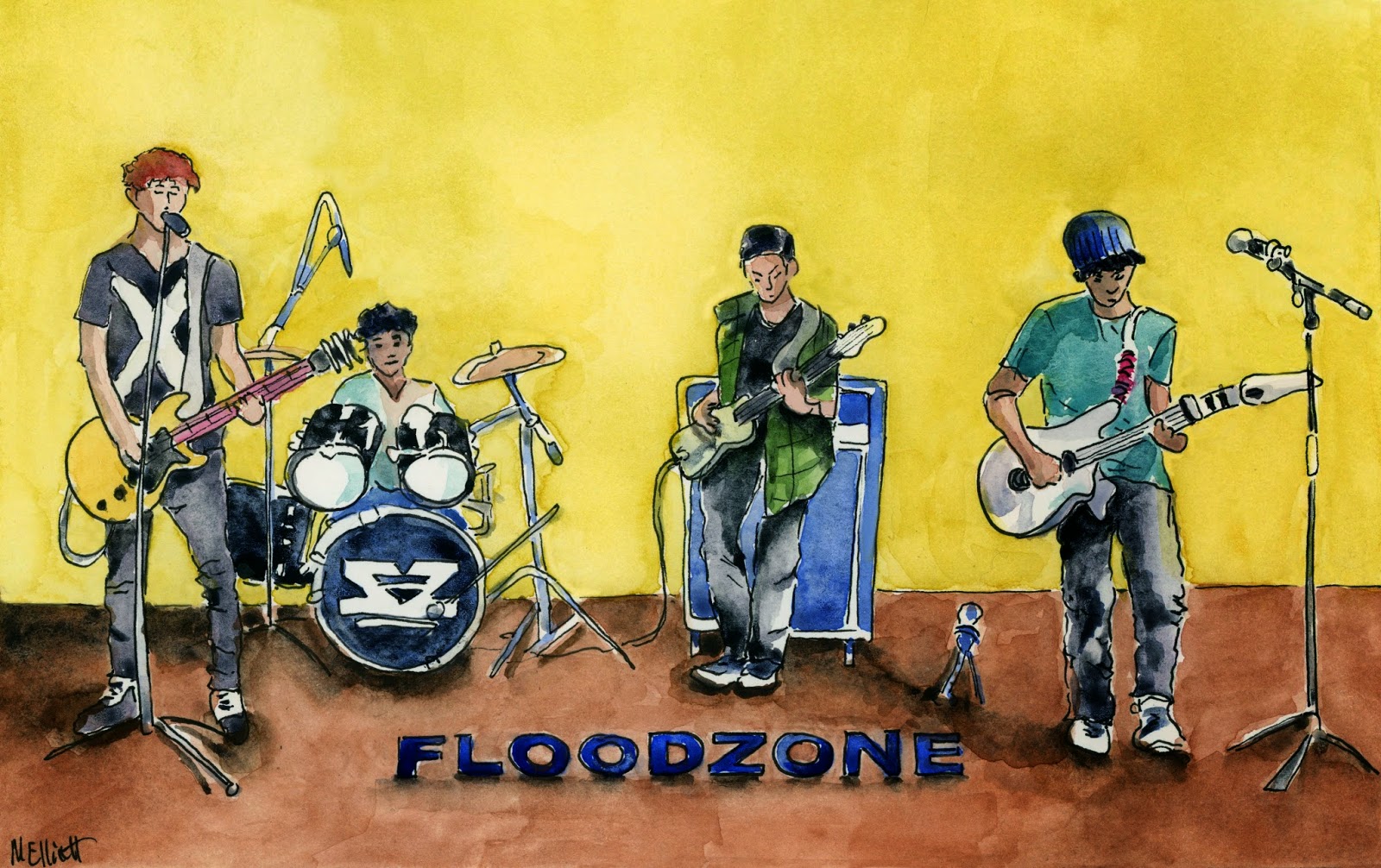 We have wanted to feature a band at summer reading for some time, but didn't know anybody who had one until now. The guy on the right in the beanie is Allen, a former book club member who graduated high school last year and went on to music college, and has recently joined this band. This was a really challenging one to paint--all I had as reference material was an exceedingly dark screen grab from a concert they did, and between the dark stage, the laser lights, and the bobbing heads standing down in front of the stage, it was hard to get a good one! So I greatly simplified these instruments, as well as altering the stage set-up to pull all the band members in closer together. I sent the jpg to Allen tonight, and he seemed happy with it, though, so I think we'll go with it. I should have asked first to find out that Flood Zone is two words, but he was okay with that too, fortunately. Otherwise, I'd have to exercise some seriously atrophied Photoshop skills to put a space in there!

More to come this week…

Posted by Melliott at 9:36 PM No comments: