This was the weekend in which I was supposed to get ALL my summer reading illustrations done. I should have known that it's always one part inspiration and 10 parts perspiration, with the result that everything takes a REALLY LONG TIME. Anyway, I managed to get two done, plus a logo of sorts, so at least I made some progress.

Our big activity this summer is building, painting, and decorating three Little Free Libraries, which we are then going to install (with the help of the Public Works Department) at strategic locations around Burbank. Although there are already some LFLs in Burbank, ours are going to be specifically donated by the Burbank Public Library and the Friends of the Library, and the Friends will give us the books to help keep it stocked. Because let's face it, although the ideal (and slogan) of LFLs is "Take One Leave One," the books do tend to run out, because more people are taking than leaving. Which is fine, since we always have so many donations of books with which we can fill them. And it can be an ongoing project for our teens, who can get service hours for picking out books and going to fill them up again when they are empty.

So here's the first illustration: 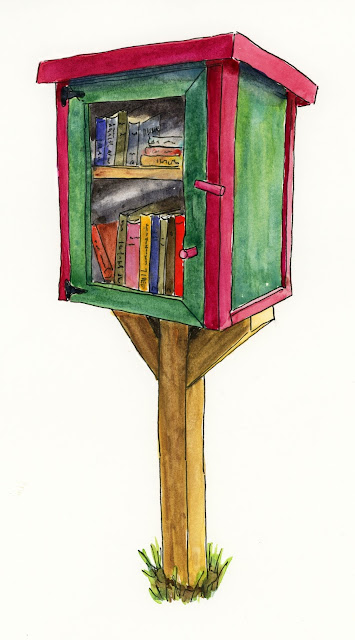 I did it in strong colors to match the summer reading logo we are using this year, but I left it otherwise pretty plain, because I don't want to influence the teens when it comes to their own design ideas.

After last year's success, the Teen Advisory Board decided they wanted to do another lock-in murder mystery game again this year for our finale, and we just came up with the theme, which is "Body in the Book Shop." So I had to find a reference photo (it's a used bookstore in Rome, with the signage changed), and then I drew it twice (the first time it was very crooked), and watercolored it. I spent the next few hours coming up with logotype to go with the bookstore. I had hoped to superimpose it over part of the building, but it just didn't work, so I cropped the bookstore a bit and put it to the side. I think it will work—we will see what others say.

This illustration was challenging, in that you have to make it look like there's something back in the dark recesses of that bookstore, without actually painting all of it and then blacking it out, so I got creative with a few details that lead the eye to believe there's something there. But it was nerve-wracking, because I painted the entire rest of the picture first, and put the dark bit of the interior in last, and if it didn't work...well, let's say I would be less happy right now. But I think it did...

Anyway, two down, and a few more to go: LEGOtopia, Book Café, and books for the Reading Log cover. I hope to spend some time on those during some evenings this week.

Posted by Melliott at 7:14 PM No comments: