I have been looking forward to painting this guy for weeks—partly, I must admit, because his was the last picture of the 30 days of Sktchy portraits, but mostly because he has such an interesting face, expression, hair. So why I didn't follow the lesson is beyond me, except that I always feel the need to do something a little differently. Most times that works out, but sometimes it just implodes, as it did today.

The lesson, ironically, was to know when to stop when making a portrait. The instructor decided to focus on the face—the eyes in particular, and his general expression of slight anxiety—and then left everything else—the dreads, the facial hair—to simple squiggly pen lines, so that the face would really pop. 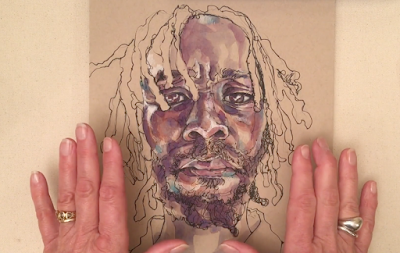 I decided I didn't want to be a copycat, so instead of working in ink, I drew him in pencil and decided to paint the whole thing—and boy did I. My biggest mistake, which I realized way too late, was introducing a stark black for the pupils of the eyes and for the whiskers. After doing everything else in shades of Sienna, Shadow Violet, Naples Yellow, and Ultramarine, I should have stuck with that soft palette. The black just overwhelmed everything, and stuck out like a sore thumb.

Once I realized that, I decided I couldn't paint the dreads black as well, so I did them in Shadow Violet. Nope. They weren't strong enough to fight with the black or to stand out against the face. I changed half of them over to Sienna. Nope again. Another bad choice.

At that point, I decided to stop. I started writing this, and let the paint dry. Then I thought, What have I got to lose? So I took my pen and went back in with a squiggly line on the dreads and the whiskers and put a few lines here and there to accentuate parts of the face a little more. 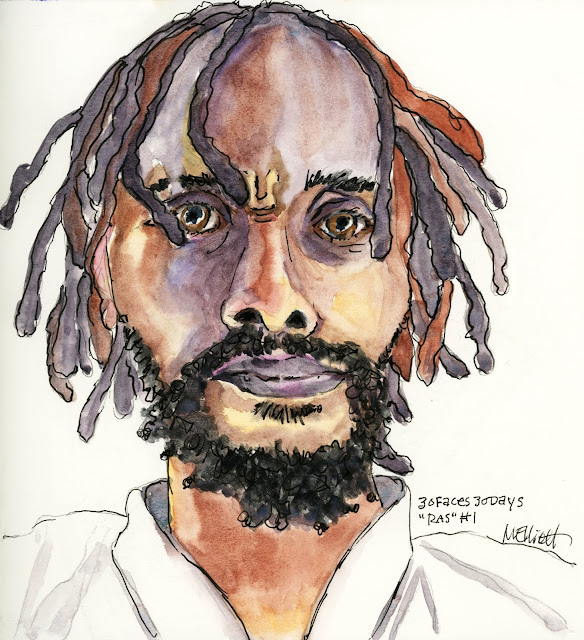 The black line everywhere at least cancelled out the problem with the contrast between the soft colors and the stark black, but the entire portrait is still woefully overworked. I'm posting it anyway, as a lesson to myself to be more discriminating and to think a few steps ahead. I'm going to try him again in a few days when I'm not feeling so frustrated with this version. I still think it will be a cool painting, if I can get it right.

This is Jujitsu master Ras.

Our next lesson on Sktchy was also about pattern, but this was pattern on skin—the model had tattoos. She was also posed at an awkward angle and was sticking her tongue out, and I found her rather unappealing as a subject.

I decided, instead, to reach out to my friend Susan, who is a professional photographer and also has tattoos, friends with tattoos, and fellow photographers who shoot pictures of people with tattoos, and ask for some subject matter. Her friend Travis Haight overwhelmed me with options (thanks, Travis!), and after a couple of false starts on one woman whose facial angle I couldn't capture no matter how hard I tried, I switched subjects again to the beautiful Marion.

I have to say that painting tattoos is a lot harder than was doing the pattern on Fasyali's shirt yesterday! They are unique rather than repetitive, and it is also hard to decide how to convey them, since they are drawn onto a malleable surface (skin) instead of onto paper. I ended up drawing the model in pen but rendering her tattoos in pencil and paint only, to give them a slightly softer look. I didn't do them justice, but captured at least a faint likeness. 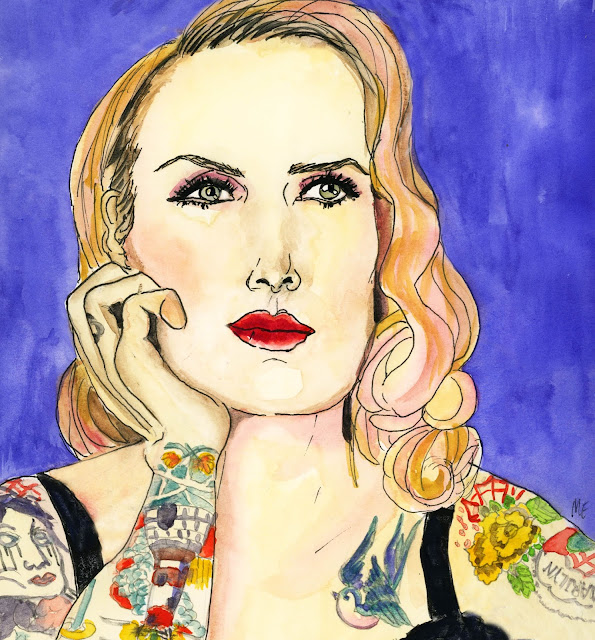 It's also easier, I have discovered, to paint ordinary-looking people than it is the extremely glamorous. This woman doesn't have a noticeable pore on her porcelain skin, no wrinkles, and only a few faint shadows, and it made it harder to capture her personality than when I can go all out on the shading and modeling of less perfect features. I ended up concentrating mostly on her beautiful eyes, and on her blonde Lana Turner hair with pink highlights.

This was a fun, if challenging, exercise. Not sure I'd want to capture tattoos again, except with photography. The thing is, it's an art form in and of itself; so being an artist who copies art means you don't ever quite live up to the original.


Posted by Meligelliott at 11:51 PM No comments:

Today's lesson was to deal with repetitive pattern, exemplified by Fasyali's shirt. I think I was supposed to learn a little more about how the pattern moved and shifted according to the folds in the cloth, but honestly, I just had fun slopping some color around.

Also, Fasyali was big fun to draw. I particularly enjoyed the challenge of making it look like there were eyes behind those sunglasses without making them either too prominent or too faint. And I like his sticky-outie ears and tousled mop of hair. 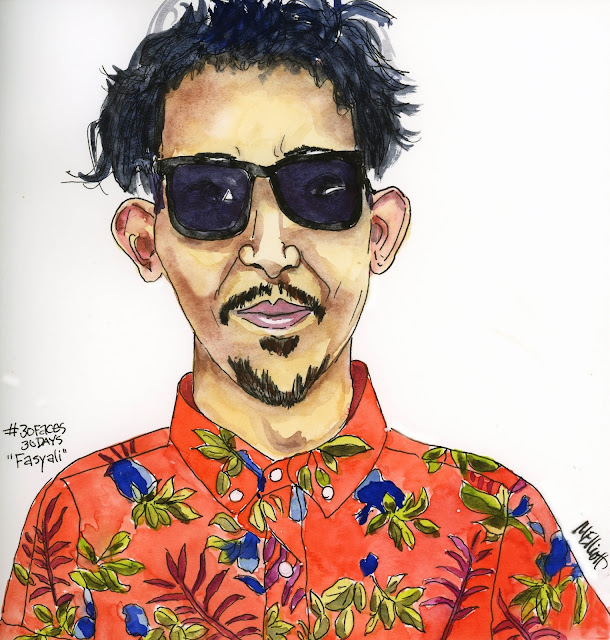 Posted by Meligelliott at 12:56 PM No comments:

I decided to cheat and combine two days' lessons into one, because I didn't like the model (we had already painted her earlier) for one of the lessons.

The first lesson was to incorporate hands into the portrait, which gives it extra interest and, in some cases, focus, but the model was holding one of those phoney poses where you lay your hands next to your face and try to look glamorous, and it was goofy looking.

The second lesson was how to convey forehead wrinkles. Fortunately for me, wrinkly guy also had his finger to his temple to make him look extra quizzical, so I put the two together.

I have never found hands as hard as some people say; but I have never gotten them exactly right, either. I think it just needs more observation and practice. As for the wrinkles, the secret is apparently to leave them as a hard edge on the bottom and then shade them upward, which I did my best to do here, with some but not complete success.

This guy was a cool model, and I enjoyed painting him. I didn't quite know how to show that he was wearing a white shirt with a white sheepskin jacket, but since the shirt was ultra bleach-white and the sheepskin was slightly yellowed, I added in some yellow and blue and think I caught it well enough at least to frame his face.

I started way over to the left on the page with the face so I would have room for the hand, and ended up having a couple extra inches on the right that I could have used to finish out his ear on the left, but oh well.

I also spelled his name wrong because it just made more sense in the moment—it's actually "Tkyo." Sorry, man. 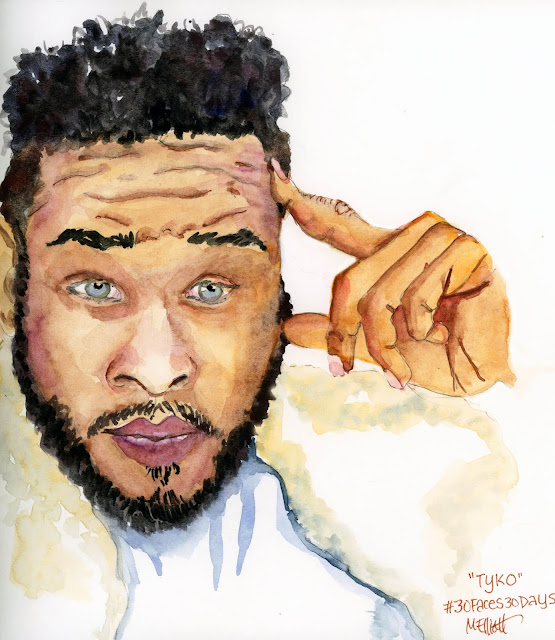 I have lost count but I know I owe at least three more portraits, maybe as many as five. I'll see how long my patience lasts! I have another project percolating...


Posted by Meligelliott at 4:05 PM No comments: