I am gearing up for a large painting, and woke up this morning with the desire to do some contour drawings of some of the disparate elements. I think what Daryl, my friend who requested a painting, had in mind was a simple contour with some watercolor highlights (like I have done for a few of our friends at the library), but once I got into researching the project (a Steampunk still life), I became excited by the various challenges presented and decided to do a large, full-on "real" painting. After painting a lot of small things that I could complete in an afternoon or even a couple of hours, I am wanting to get back to some bigger, more detailed work that takes time, planning, focus. We'll see how it goes! For now, here are some contours from my sketchbook: 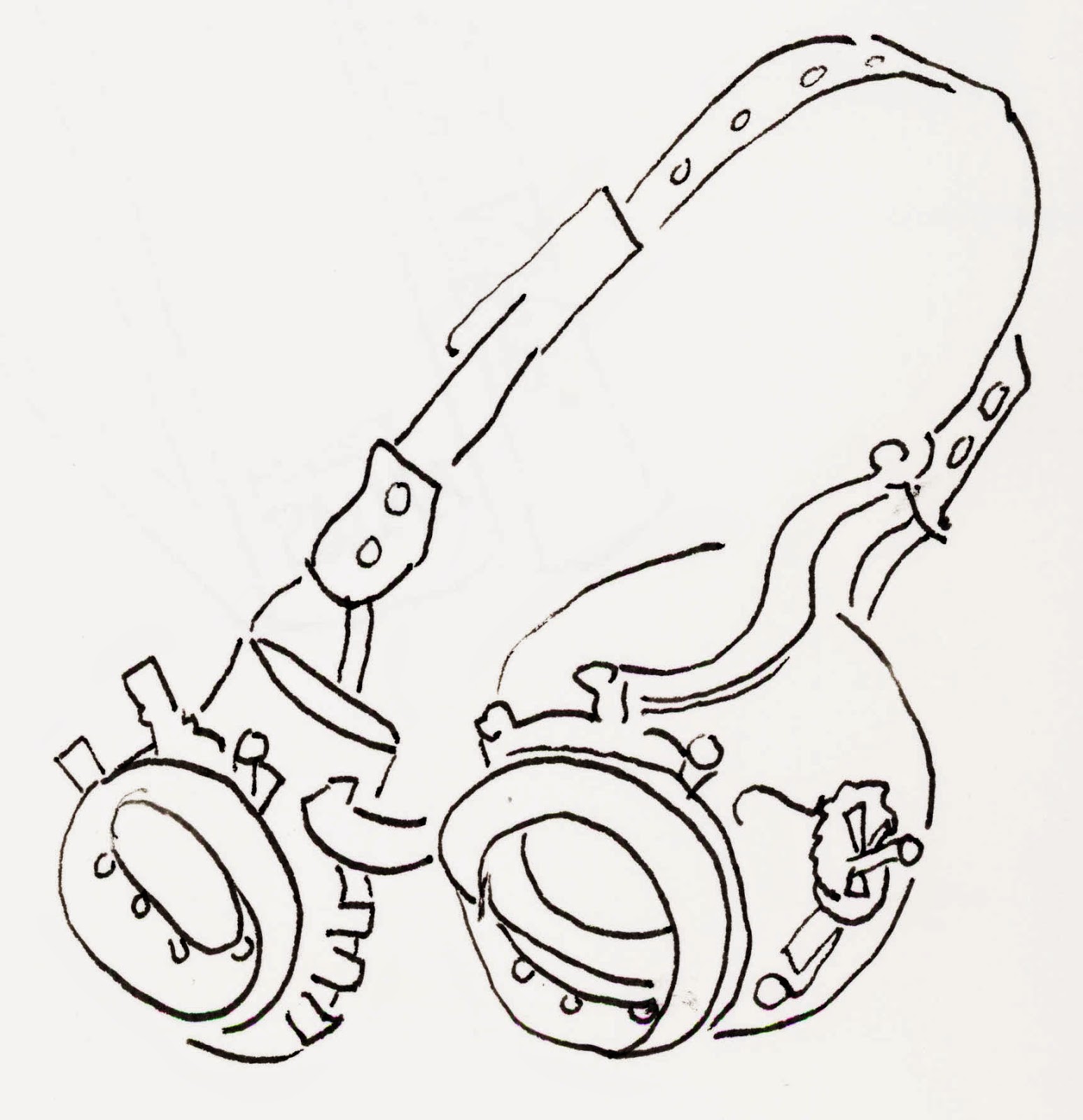 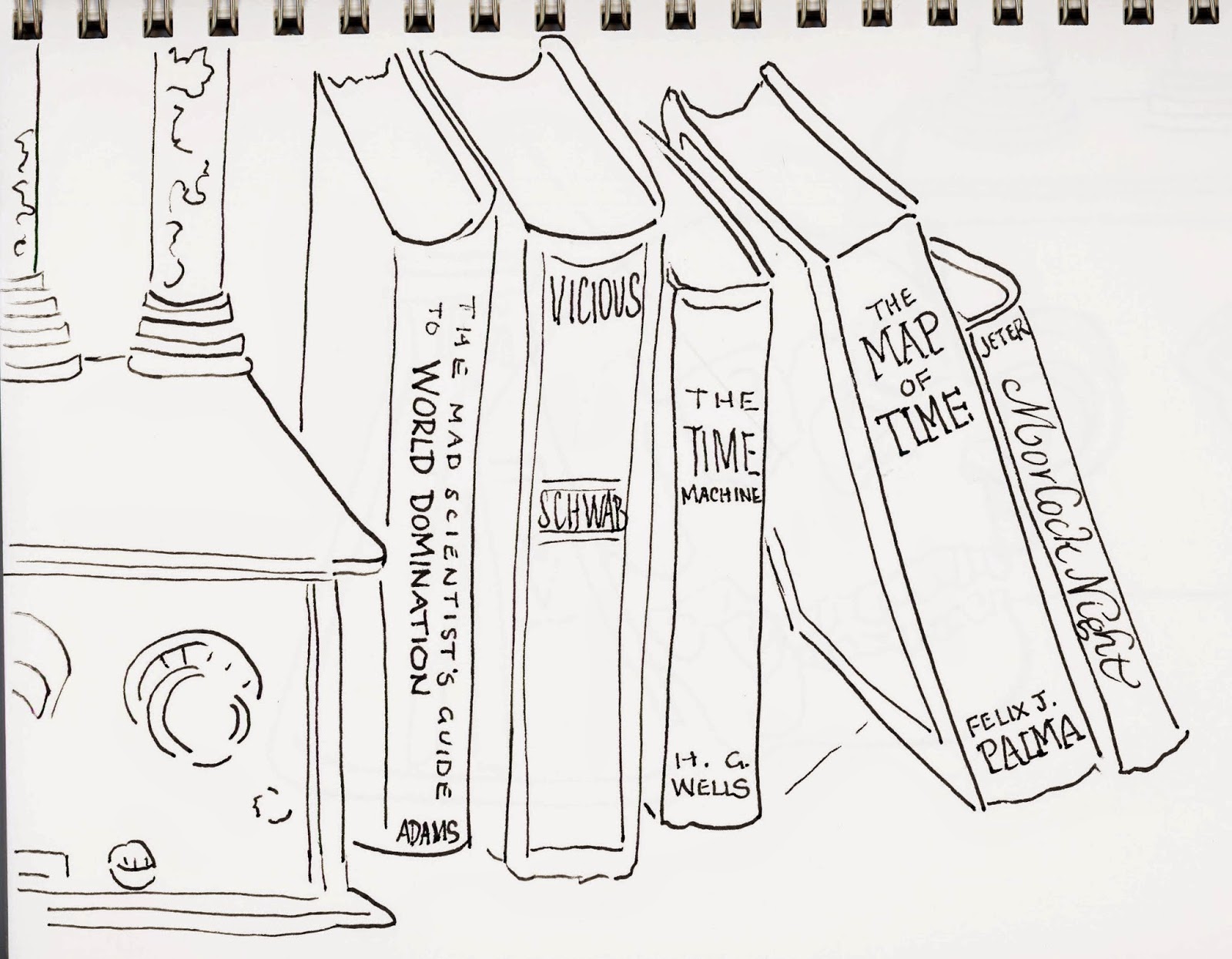 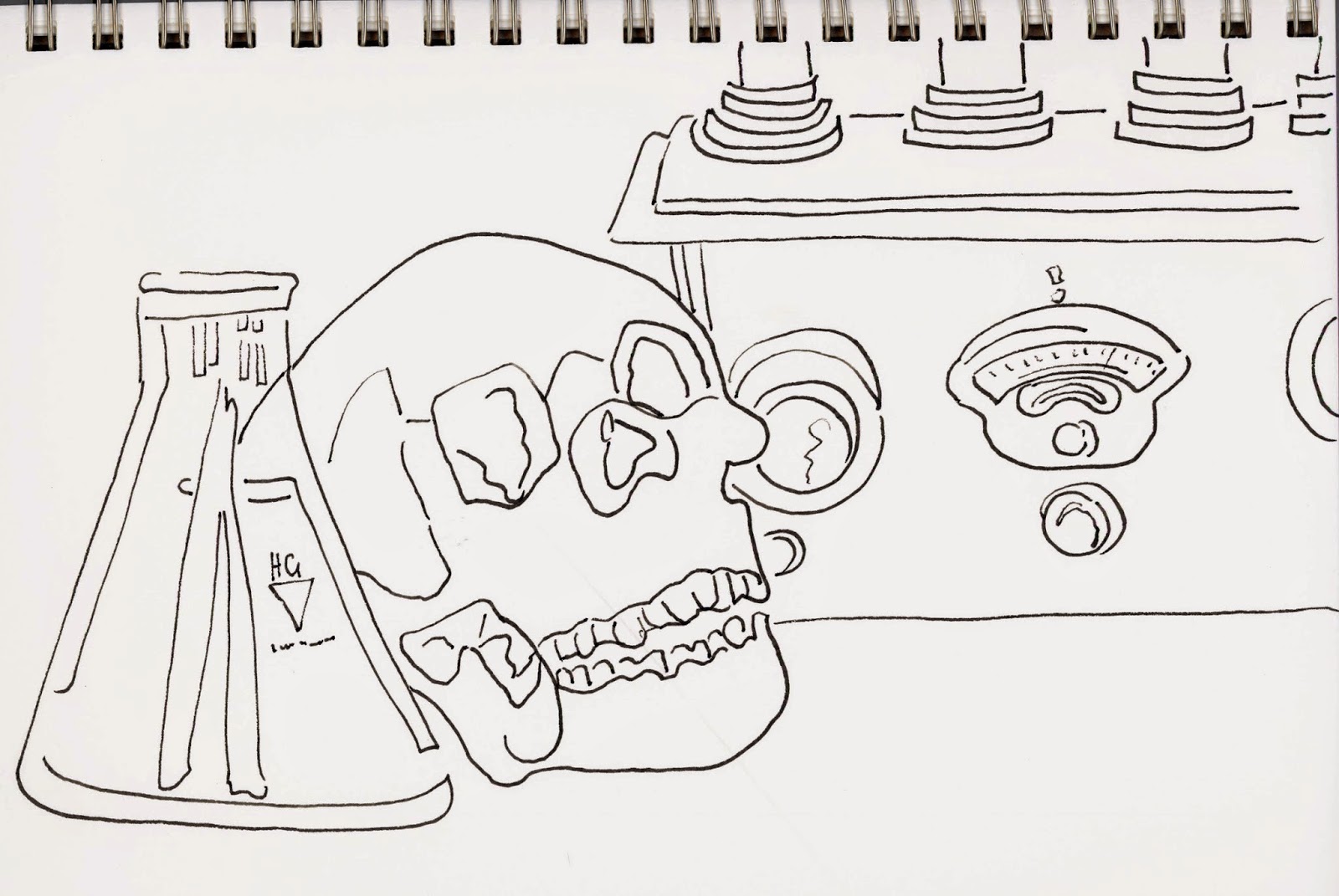 More on this project as it unfolds. Since I go back to work on Monday, it may take a while! Happy Hallowe'en, everyone! Bwa-ha-ha-ha-ha.

I am not a great photographer--in fact, lack of photographic documentation (or ability) is a trait that apparently runs in my family, because photos of any of us are few and far between, and most of the vacation photos my parents took to memorialize their many trips were fuzzy interchangeable vistas. Previous to the advent of cell phones with photo capability, it rarely occurred to me to bring along a camera, and when I did, I forgot to use it!

Now I am making up for lost opportunities, but as I said, not great at it. So I often go online and root about in others' photos. I seldom work straight from one photograph (since I agree with Judy Morris that it's both risky and not particularly ethical), but I often take disparate elements and combine them, as I did in this painting I made about 10 years back in watercolor class at L.A. Valley College. I took out a book from the library with pictures of trees in it. I took out another with rodents in various poses. The cat I drew from life, having examples available around the house. The glass slipper was somewhat humiliating--I put this painting on display once, and someone said to me "I love that you made the slipper peau de soie instead of glass." Not intention, m'dear, just lack of skill! The coach is a hybrid of my own blue teapot with the wheels, door and perch of the Disney Cinderella coach. 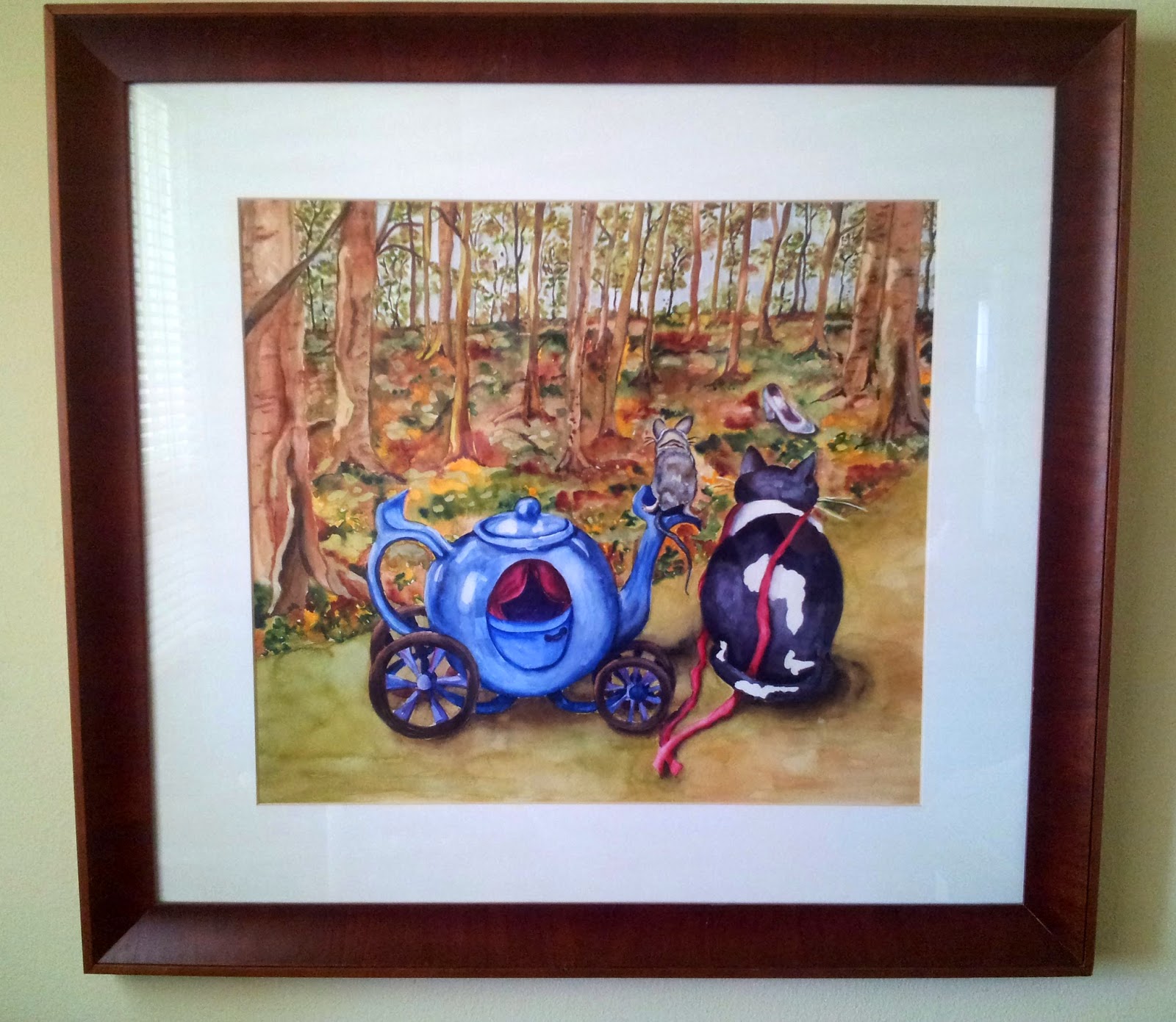 There is another reason why I don't often copy faithfully from one photo--the fact that I am almost always dissatisfied with the rendering. As much as I want to paint freely and loosely, copying from a photo seems to send me straight back to that painstaking person who has to (try to) capture each minute detail, and not only is my skill set usually inadequate, but I get halfway through and think, THIS is not the painting I wanted to make at all!

I decided, however, to give it a shot again this week, because I saw a photograph I wanted to capture, for a couple of reasons. One was, of course, that the composition, colors, and subject matter appealed to me; and the other was that I wanted to make the painting as a gift.

I am a fan of the author Deb Caletti. She writes both young adult and adult fiction, and I have liked all of her books, some of them a lot. I also feel guilty about Deb, because I once invited her to be a guest speaker at my library and then had to uninvite her. I had sent out emails to a variety of YA authors who would be in Los Angeles for the L.A. Times Festival of Books, hoping to snag one for an author appearance while they were in town. Deb (who lives in Seattle) was one, and Maggie Stiefvater (Virginia) was another. Maggie's agent replied and said Hey, Maggie is just starting her Printz tour (her book The Scorpio Races was a Printz Honor book) with John Corey Whaley (who won the Printz for Where Things Come Back), so how would you like a twofer--Maggie and Corey? I was ecstatic, accepted, and booked the auditorium. Two days later, I heard back from Deb personally, and she said she would be delighted to appear at our library. Ordinarily I would have just said Author panel! and booked her too, but since Maggie and Corey were part of a tour, I couldn't do that. So I had to say Gee, Deb, I'm so sorry but you can't come after all. She was graciousness itself, but I always felt badly.

Long story to get to: I follow Deb Caletti on Facebook, where she occasionally posts photos of weekend activities amongst the news about book tours. She posted a photo from a day when she was at Lake Union, with a caption that said "I finally found my boat!" The photo was an unusual composition, with color challenges, an interesting perspective, and water (of which I haven't painted much), and I immediately resolved to try making a painting of it. I also decided that if I did and it turned out okay, I would send it as a gift to Deb Caletti to say, Sorry again for reneging on the author appearance, and please come by the next time you're in Los Angeles! Here is the painting: 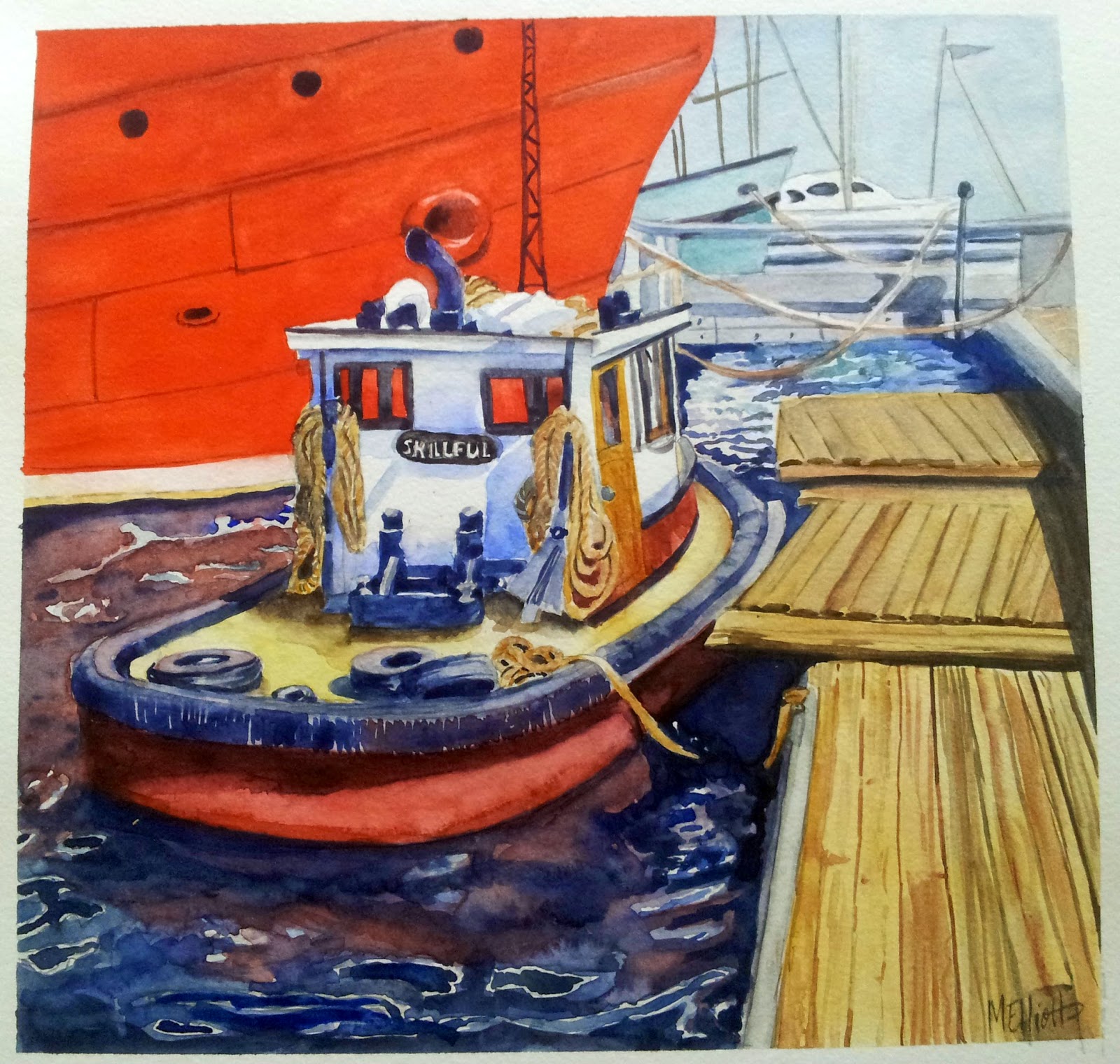 As I said above, not really the one I wanted to make. How I'd love to paint is something like Thomas Schaller, who creates the ocean with a quick wash, flicks his wrist to make waves before the paint is dry, and sketches in a pier or a boat freehand in a beautiful ultramarine/burnt sienna mix while simply eyeballing his photo. But that's not me. So I spent about nine hours on this, hoping as I went along that it wouldn't turn out looking like a paint by numbers affair. There are many areas with which I am less than satisfied, a few that make me happy, but over all, I think I will call it good and send it to Deb Caletti. Hopefully she won't be as critical as I am and will simply be reminded of a delightful day out, and of a librarian who wishes her well.