For the past few months I have been a member of the Sketchbook Skool Kard Exchange. For Christmas, Valentine's Day, and Spring, they sent out lists putting us into groups with four or five other people, for whom we make and send a card. (No, I'm not going to spell it with a "k.") I almost missed the Spring deadline, which was April 30, but managed to get them in the mail on the last possible day. Two are here in California and one is in Ohio, but the other two are in Germany, and in the Philippines, respectively, so they won't get theirs for a while. But I thought I'd share what I did here, since I spent most of a day on them and haven't done much else in the way of art for a while! 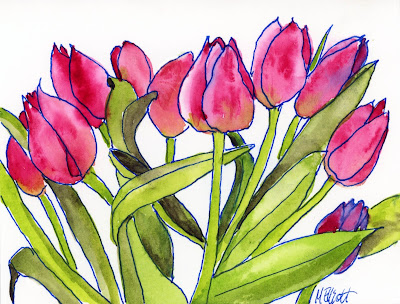 Here is the first. I made a mistake and picked up my blue pen instead of the black one I had intended to use to draw this, but I ended up kind of liking the blue, especially because it's not QUITE waterproof, so it bled into the pink and green here and there and gave some unexpected but nice effects. 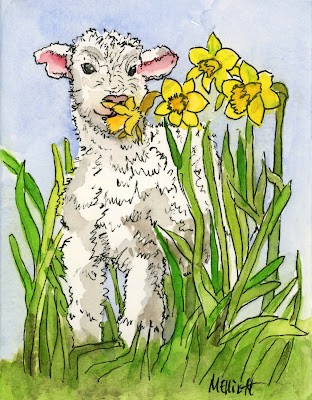 Here is the next. I wasn't completely pleased with my rendering of this lamb, who was much cuter in his photo than in my drawing, but I couldn't resist the picture of him cozying up to the daffodils like that. 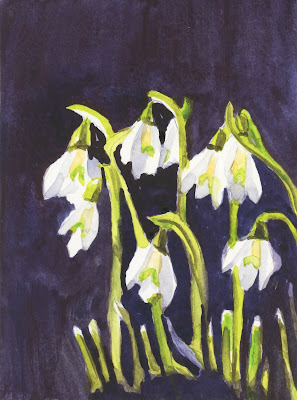 On this one, I tried something, but didn't quite pull it off; my plan was to do a "negative" painting, but I didn't do enough parts to leave them showing through, and it ended up just a bunch of snowdrops with a REALLY dark background—possibly a little dour for spring? But I love snowdrops... 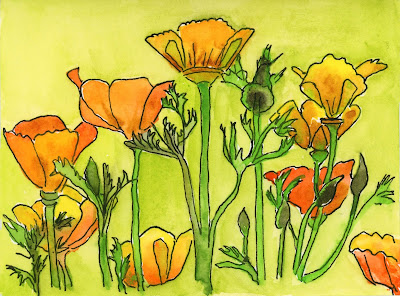 I couldn't bypass the opportunity to paint our native State flower for one of the Californians...the saying inside reads "Happiness held is the seed; Happiness shared is the flower," courtesy of someone named John Harrigan, who I discovered when I googled "flower sayings and puns." 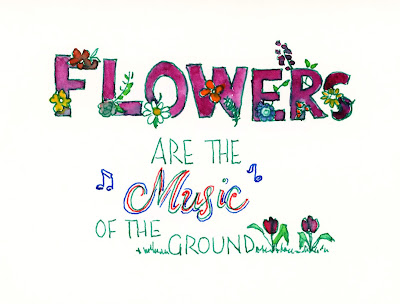 And although the lettering for "FLOWERS" is FLOWing downhill, both on its baseline and in size, I had fun with decorating this saying. The rest of the "poem" (inside) is "From earth's lips spoken without sound," and is attributed to Edwin Curran.

I reflected, after I finished all of these, addressed the envelopes, and scrounged up the postage, that I possibly could have felt more productive had I spent the same amount of time painting just one big painting from the multitude I have been promising myself I would undertake; but it's nice, occasionally, to do something that will bring a little sunshine to others, and I'm also enjoying being the recipient of cards BACK from my group (two of whose have already arrived—they obviously got "on it" much earlier than I did).

Last Thursday, I drove up to Santa Barbara for the day, to attend an Adult Services Symposium for librarians hosted by the California Center for the Book and held at the Santa Barbara Public Library (main). It was an incredibly busy day: I left at 7:30 to make sure I got there in time for the first presentation, which was at 9:30, and arrived 10 whole minutes early, given weekday traffic. They had a nice breakfast spread to which we all helped ourselves, and began promptly at 9:30. There were four panels scheduled for the day, and I had anticipated some break time between each one, during which I could meet and greet people and hand out my new (temporary) Book Adept business card, to start generating some consultant work at libraries. But the panels were so tightly scheduled that we went from one to the next, took a scant 45 minutes for lunch (which included standing in line for our picnic box and hiking two blocks to the courthouse lawn where we were to meet and eat), and then attended the other two panels without a break. 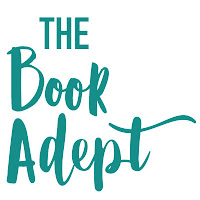 I did manage to get my card into the hands of two library system directors and some other random people, so it wasn't a waste of time; and I learned a lot from three of the four panels. During the panel about how to prepare your library for an emergency, which no longer applies to me since I'm not working any longer as a public librarian, I was able to find some down time for myself to sketch the panel; the rest of the time, I was too busy taking notes! So here are the emergency preparedness people (all of whom went through fires and/or mudslides last year and lived to tell about it). 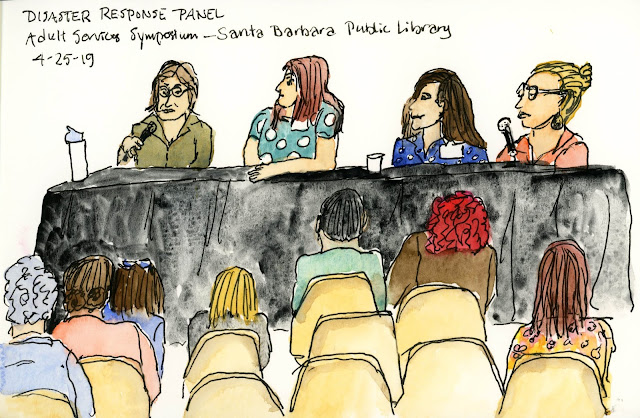 And here is today's breakfast interlude at UCLA before I taught my class, where the dining room was, for once, fairly full of people I could capture before they ran off! Even found a little kid to draw, although his mother kept giving me side-eye, obviously wondering why I was staring so fixedly at her child. I tried my best smile, but I think that made it worse. Well, I guess my new purpose in life is to make parents more protective of their children? 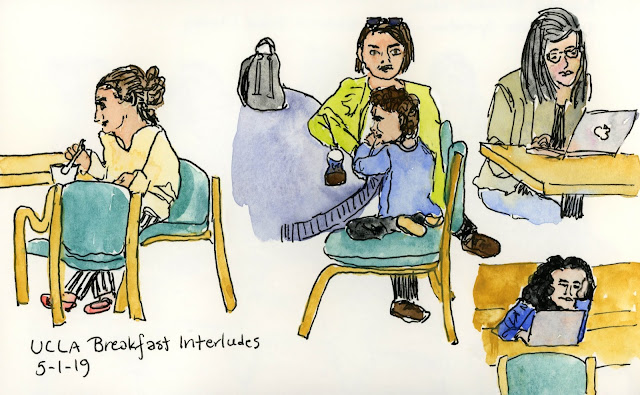 Posted by Melliott at 2:34 PM No comments: