This is the one I ended up painting for my cousin Karen for Christmas. She has recently started a vegetable garden installation business, so I did something evocative of that.

I've never done this before when I was working on a painting, but since this one had so much detail in it and I had to stop in between layers to let them dry, I decided to document my watercolor process. It made me feel a little disjointed, since I usually work without thinking about why I'm doing what I'm doing and in what order, but it was good to see the steps and realize why I sometimes mess things up by not thinking through what I need to do before putting brush to paper. 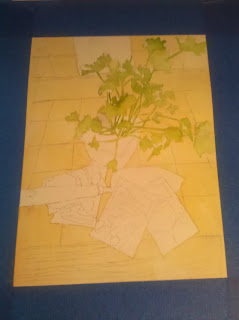 I didn't think of documenting until I'd already laid down the first layer, so the raw drawing isn't featured, but here's the rest. I took a photo every time I had to stop for things to dry. This is the undercoat. The tiles are gold, and the wood is dark brown, so I washed everything with the pale gold except for the Italian parsley, which I gave a light coat of green, and the seed packets, which all had white backgrounds. I could have washed the pot gold too, since it was darker, but I was afraid of mixing up my drawing lines. 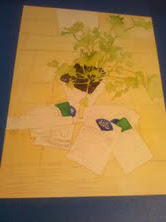 I put in some darks, here, and the things that were more of a flat color (as opposed to something shaded and nuanced). I apologize for the quality of this photo and the next one--for some reason my cell phone camera shot these two small and the others much larger. Oh, well--too late now! 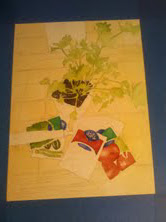 Continuing on with the seed packets, getting the details added... 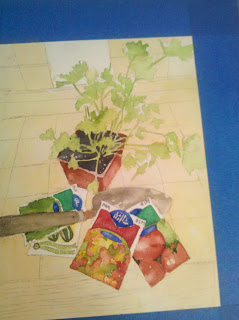 Pretty much finished with the packets here, starting to paint the pot and the trowel. The trowel was difficult, because it was a really old one, so rather than looking like new painted wood and metallic blade, it all looked one color--dirty bare wood and dirty/rusty blade. I tried to keep a few highlights where the original metal shone through, but wasn't too successful at that. 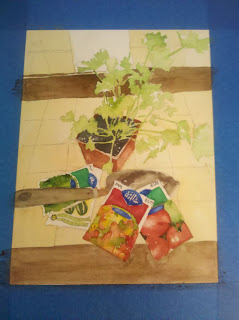 I added the background wash for the two strips of wood here--the one along the back and the one on the same level as the tile. I'm not sure that one reads as upright and the other as flat--maybe it will be better when the painting is done. This piece of furniture is a wonderful old British washstand that I inherited from my mom. It's been in my dining room for just a couple of months now, and I decided it would be fun to include it in a painting. 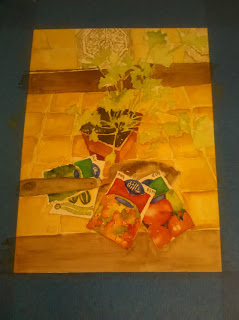 Here's where I went for all the detail in the tile, and I kept working it for quite awhile. It's shiny, there is some shadow, and there is an illusion that the flat tile has white grout while the vertical tile has dark grout, so it's pretty challenging. I also had to do those decorative tiles in the background--I tried not to go too crazy, just giving the sense of them instead of perfect detail, because they are, after all, BACKGROUND. Looking at paintings as photographs is quite humbling sometimes--it looks good on paper to me, when my eye goes from one detail to another, but the photo gives an overview and I can see that the way I have painted the tiles makes them look uneven, like the surface is rippling a bit!


And here below is the finished piece (scanned, not photographed with my cell phone, so pretty accurate). I put in the wood grain, and went for the darks. I left the parsley until last and put in lots of mediums and darks, and then did shadows under everything. 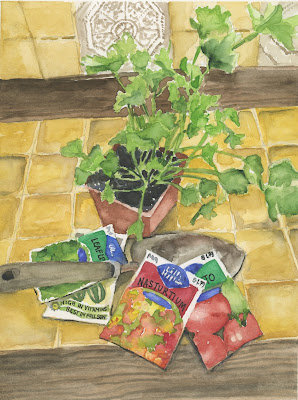 I'm off to the framer's Saturday morning to get it framed (ideally) or at least matted nicely, so I can wrap it up for my cousin Karen to open on Christmas. Nothing like waiting until the last possible minute! But...that's the way it goes when A. you work full time, and B. you're indecisive!

Thanks for looking...
Posted by Melliott at 11:55 PM No comments:

I posted this before, and then had to take it down. I forgot I had blogged here about painting a picture for Karen for Christmas, and when I posted the pictures of the new Teen Scene, I sent the url to Karen so she could see the photos, and then her sister Heidi reminded me that Karen's secret Santa Pal (and her gift) would be revealed if she looked at the blog, so I deleted this post in a hurry.

Anyway, this was my initial idea of a garden painting for Karen, but then her other sister, Kirsten, said it should have to do with vegetables, so I did the painting in my next post (parsley, seed packets and a trowel) instead. But this one was good practice! 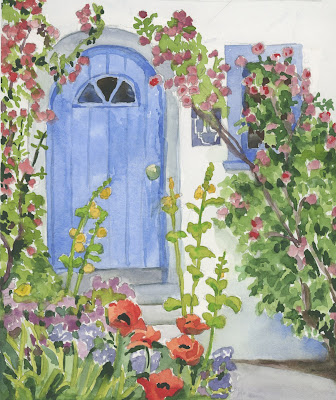 Posted by Melliott at 7:00 PM No comments:

Our new teen area at the Burbank Central Library is open! Not officially--we'll be having an open house to show it off the second week of January--but it's all ready for teens to use. A few of them have already, although since school is out for the holidays, it's kind of a ghost town around here. Here are pictures:

Posted by Melliott at 9:45 PM No comments: