Some was planned, some was not. On Saturday, I took my car to Glendale Kia for a service, but also because it has been making weird creaking noises when I start and stop and turn. I had a suspicion something major was wrong with it, because after our big winter rains, a bunch of potholes opened up in our streets and highways, and I hit a large one dead on with my left front tire while driving 70 mph in the fast lane on the 5 freeway. Sure enough, when I got it to the dealership, my shocks were BENT and I had to replace them. And, of course, I was also badly in need of a general service for everything. So I left the car and walked to Foxy's for breakfast.

Foxy's "thing" is that they have a toaster on every table, and they bring you your bread untoasted, so you can put it in when you want it and have piping hot toast. I love this immediate gratification (I like my toast at the end of my breakfast, by which time it's usually cold and hard), so I decided to memorialize it as an urban sketch: 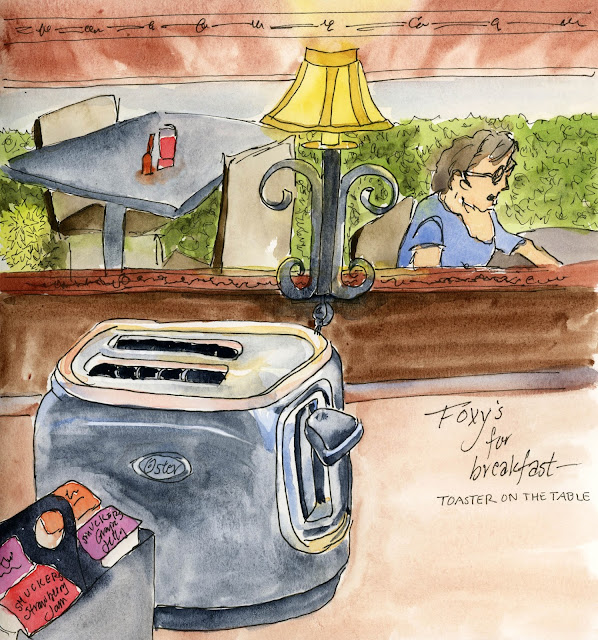 I was sitting at a table with a view out to the patio, so I included that in my sketch as well. I had to draw it there but watercolor it later, since Foxy's is a popular place on Saturday morning, and there were multitudes waiting for my table. So I took a reference photo and went over to the Americana mall to see a movie, to pass the time. When the movie was done, so was my car! (I do NOT understand people who take their car in and then sit in the waiting room for five hours when they could walk a few blocks and have some fun!)

Today, I got down to business: drawing and painting two more illustrations for Teen Summer Reading flyers and brochure. The first one was a cinch and took me half an hour to draw and another half an hour to paint; but the second one took me about five hours by the time I was done. I'm pretty pleased with it, though.

Here is the first illustration, an alternate to my too-childish LEGO drawing from last week. I think this one will work better, although it is infinitely more boring! 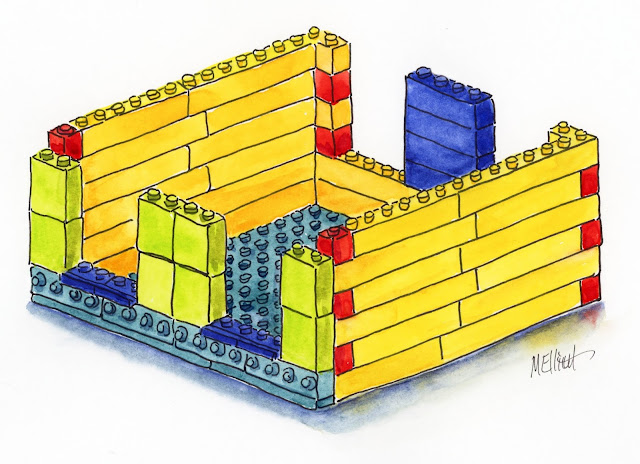 And here is the second illustration, for the Reading Log. I do one of these multiple-book illustrations every year, and the hardest part of it is selecting the books. They need to be colorful; they need to have a variety of colors (not all the same scheme); the lettering needs to be manageable; and they have to look good together. Also, it helps if they are popular books by popular authors, OR if they are books I'm trying to get the kids to read.

I laid them out various ways, photographed them, and worked from the photo for the drawing (and the shadows), but then looked at each actual book as I went along (I checked them all out and brought them home with me) to make sure I was representing the artwork and colors well. This was a big challenge! Lots of colors, shadows, lettering, detail. 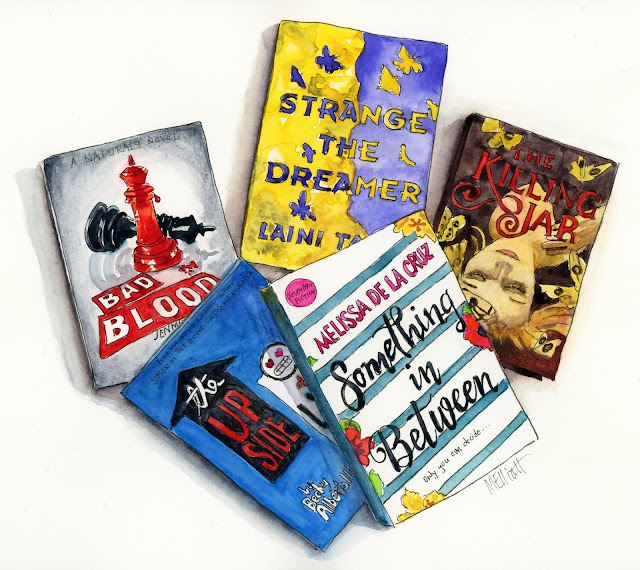 All of these are LePen (it's similar to a Micron) #3, and watercolor.

I had hoped to get my third and last illustration (for Book Café) done today too, but I ran out of time and daylight. Maybe I'll get to it during the week...or next weekend? I'm probably crazy to put all this pressure on myself to illustrate the summer reading program every year, but although it's a lot of work and stressful because of deadlines, I do enjoy seeing my artwork on the final product throughout the summer!

Posted by Melliott at 7:33 PM No comments: