Today's painting is courtesy of Google, who chose to feature the Native American "Jingle Dress Dance" as its artwork today. The costumes were so colorful and the people dancing looked so joyful that I couldn't resist. If I had thought through how "itsy" was the detail on these dresses (not to mention the number and disposition of the metal ornaments), I might have decided to experience the video and then go on to paint something else! As it is, I got impatient waiting for paint to dry, so some of the detail isn't as precise as it was in life. (The woman on the left had a conch shell belt...)

The jingle made by the metal pieces clashing together as the women dance supposedly sounds like rainfall, and anyone in the vicinity in need of healing will apparently receive it by listening closely to the sounds generated by the dance. It's a lovely tradition. 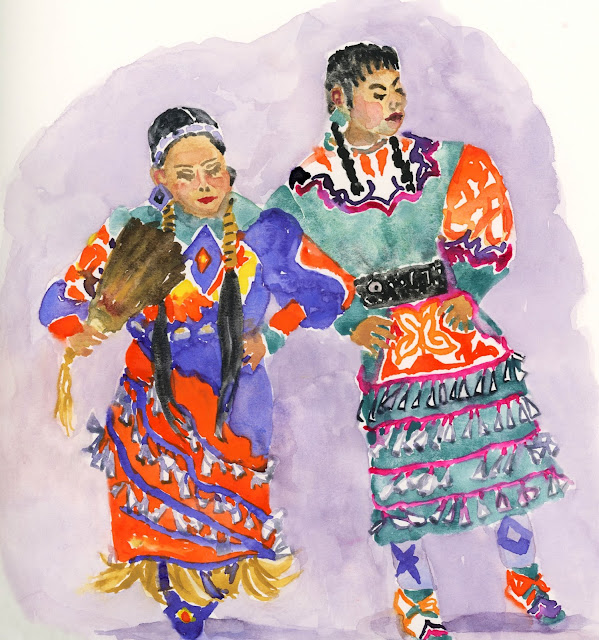 My first dancer, on the right, ended up leaning a little too heavily to her right, while the second dancer is upright, so it becomes debatable exactly where the surface on which they are dancing should be; the detail was so intense on the two women that I purposely just did a single color vignette wash behind them, hoping the crookedness wouldn't be quite so apparent. Oh, well...

I realized, this afternoon, that I was actually a day behind, and in casting around for something else to paint in order to catch up, I once again referenced Lynn's garden photos. Several members of the 30x30Direct challenge mentioned how much they liked her close-up of hollyhocks and wondered if they could paint it, and since she said yes to all of them, I figured she'd say yes to me, too. So I set out to study what it would take to paint these complex, ruffly flowers in pale colors on a dark ground—once again going for the "negative painting" mode, even though I don't do it very well! 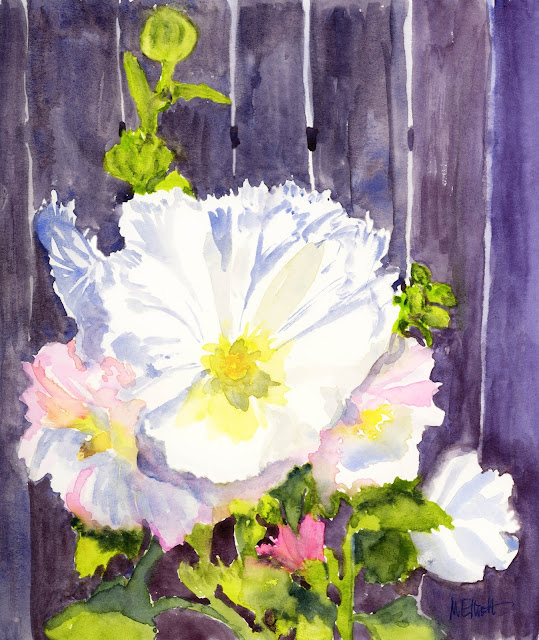 These are overworked—in the effort to note every little shadow and dip, I got too heavy-handed, putting in too much color almost everywhere instead of leaving more whites to shine. There are parts I like and parts that don't look anything like what they were meant to depict. And in retrospect, I wish that I had been less literal about that fence in the background, because I think it would have been more effective to do a big dark wash on the left while letting the whites fade into the background on the right. But...it was a fun exercise and got me further into the reverse process of negative painting. Thanks, Lynn, for the reference.

I love stone fruits so much; when the first apricots and peaches and plums start showing up at the market, I can't get enough of them. Patiently waiting for them to turn from rock-hard to ripe and ready is tough, and I really must remedy that by replanting in my yard. I used to have both an apricot and a satsuma plum, but one succumbed to disease and the other to age, and I haven't replaced them.

Yesterday, Lynne CoMo (a Sketchbook Skool buddy) posted photographs of her garden, noting that her neighbors would be getting a fair share of her abundance of peaches. I really wished in that moment to be one of those neighbors; I would much rather have eaten these peaches than painted them!

But...here's the painting. I don't paint wet-in-wet, but with this one I did give it a try within the individual peaches or between pairs of peaches, to get that graduated color you see on peach skins. The greens got a bit messy here and there, because I didn't plan them as well as I did the peaches.

It also didn't really start out intending to be a negative painting, but once I started putting in the blue sky, the rest of the painting called out for some darks to be added, and kind of ended up that way. I don't really know what I'm doing re: negative painting, so I'm sure it could have been better/more defined...but I think the peaches themselves definitely convey the basic idea, which is JUICY. 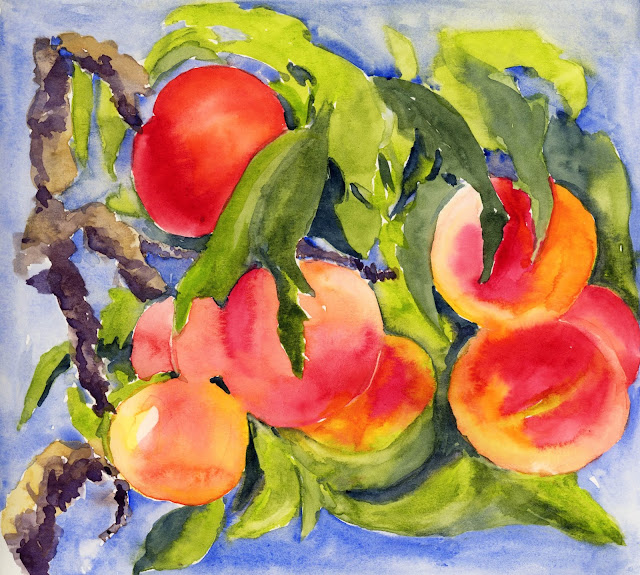 I subscribe to an online magazine and also "like" and "follow" a Facebook page called The Good Life France. It's written and produced by an ex-pat who moved to France and spends her time photographing it, from the city to the countryside, and publishing delectable photos of everything from bakery windows to ancient monuments in her magazine and on her FB page. I appropriated a part of one of the photographs for today's effort, "Café life." 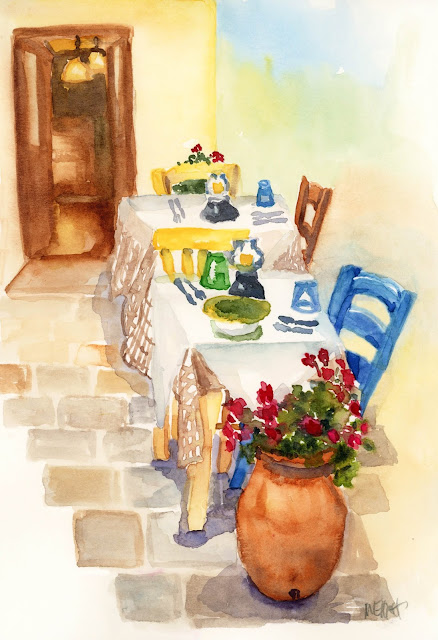 It's kind of an odd little painting, vignetted on one side and washed out on the other, and I'm afraid that the "back" chairs feel like they're falling off the flagstones into the abyss...

After today, I have concluded that I'm going to have to just quit whining and break out my good watercolor paper. Since this is a 30-day challenge, I was hoping to contain it all within one sketchbook, but this multimedia paper just isn't up to what I'm asking it to do with some of these paintings. I need something that will soak up color, hold an edge, and maximize the effects of a bleed, and this ain't it. I guess I could cut the watercolor paper to size and simply stick sheets in between the others...?

When you mimic a style...

Today, I decided to attempt to paint a mechanical subject, for two reasons: One, I liked the reference photo and thought it would be a fun experiment, and two, I wanted to try to do it the way Marc Holmes does his scooter demo.

He starts out by outlining certain areas with his brush, just to get their basic shapes, and then immediately goes in and paints those shapes; but he doesn't slather in the paint, he really watches out for the tiny highlights and edges and leaves those to shine. Watching it come together from nothing is a real experience in seeing a particular method in action. Here is an example, from paint sketch to finished object:

And here it is, with a background: 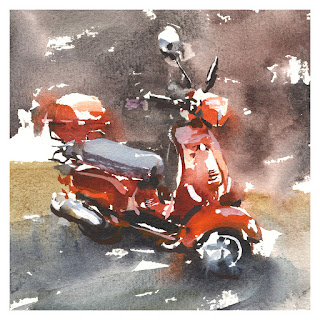 So first of all,  I picked a subject that was larger and more complicated; second, I quit looking at small shapes and also forgot halfway through to adhere to the "leave light" rule; and third, I put in a matt background, which doesn't work at all with this kind of painting! Also, the tractor got away from me and grew about a foot too long, meaning that the most important part—the dumper—was mostly off the page! (Hint: When your paper is square and your subject is a rectangle...um...duh?) 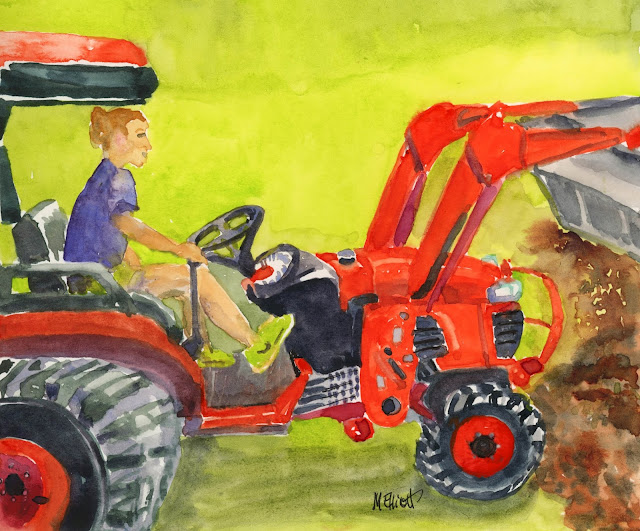 So...this is one of those paintings where you have to go in and pick out the few spots where you were happy with it, memorize those, and try again later. I felt like I captured Marc's method briefly with the roof and the seat and the figure; but then I lost the round shape of the tire while focusing on all the tiny shapes, and after that it became a whole lot of unrelieved red that should have been broken up much more definitively (and shortened in the body, as previously noted). I managed to sneak in a bit of the dumper, but a lot of that was lost to miscalculation. And the background? Nope.

But...having spent more than two hours on it, I'm posting it anyway!

Posted by Melliott at 1:05 PM No comments:

Scene from a farmhouse

Today I tried making a painting based on a friend's snapshot of the dining room in her New England farmhouse. It seemed simple, and yet...I knew, after trying it once, that I couldn't reproduce the print of the fabric in the tablecloth (at least not without an underdrawing and/or resist), so I made it a solid color, but overworked the paper and paint. The vase was filled with sparks of light and reflections, but for the most part it didn't come off as sparkly. The peonies likewise didn't reflect the ambient light as much as they did in real life; and even painting the window and plain walls behind the scene was challenging!

So, not so simple. It retains a certain atmospheric painterly quality, but it's definitely not all that I hoped it would be, and that has little to do with the direct-to-watercolor challenge and much to do with impatience, (lack of) skill, and possibly bad (sketchbook) paper. 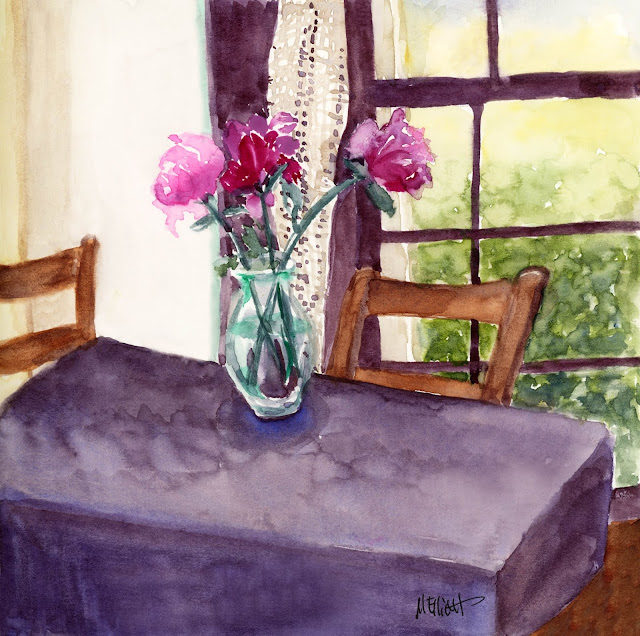 Maybe I will try this scene again later, with an underdrawing for a plan and on real watercolor paper, and see what happens.