Today I did a couple of small drawings for teen summer reading. I was hoping to accomplish at least one more, perhaps one of the main ones (the brochure cover, Book Café), but I slept too late and had too many errands to have much time.

The first is for our book-making class, and I had initially planned to go with an array of book-binding tools, but time is fleeting, simplicity speaks just as well, and I ended up with this basic picture of a book signature: 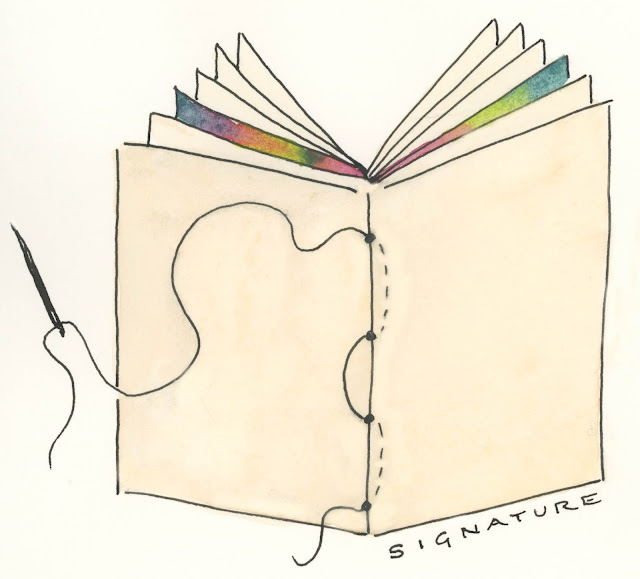 I realized after I did it that the sheet of marbled paper I "inserted" so the kids would get the idea of how this is going to work would actually be facing the other direction (inward and away from the viewer) if this were correct; but I'm going for symbols here and hopefully this will give them the idea without them thinking too logically about it and saying "Hey, waaaait a minute..."

The second is a purely incidental drawing, but since we have decided to do away with reading logs this year, a necessary one.

For the past nine years that I have run the teen summer reading program, we have given the kids a reading log every summer. If they wrote down every book they read inside it, they could bring it in and get a librarian to sign off on their entries, and receive a ticket for each one. Their name and phone went on the ticket, the ticket went into a jar at the reference desk counter, and once a week, on Fridays at noon, we drew three lucky tickets from the jar at each of our three branch, for a total of nine weekly winners of small prizes. I say small, but they're not insignificant: We give them $5 gift cards to Starbucks, or Yogurtland, or Ben & Jerry's or In 'n Out Burger.

Sadly for the past couple of years participation in this part of the program has dwindled to the point that, where we once expected to have 250-300 tickets in each jar by the end of the six weeks, last year there were only 60-some in mine. It's not that the kids aren't reading; but they don't seem to have the time any longer to actually come to the library to put in their tickets. Or, as Anarda surmises, the prizes aren't big enough for them to bother. (I hate to think it's that.)

So, this year we decided to implement a different system that would include some reading prizes but also give out rewards for doing other sorts of things, such as downloading an ebook from Libby, liking us on one of our social media platforms, etc., and would encompass more prize winners and definite hierarchies of prizes, from small and silly to larger and more impressive. We're going to create a grid with various tasks in it, and if they do one, they either win a prize, collect points towards winning a prize, or win a chance at a prize, depending. 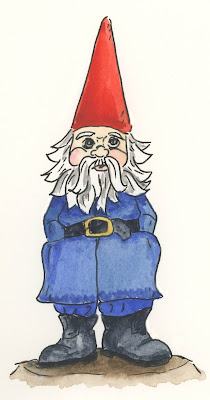 Because the program theme (Reading Takes You Everywhere) is travel-related this year, one of our tasks for the teens will be to check out (as in, use your library card and scan his bar code) the Library Gnome, take a selfie with him, and send it to us to post on Facebook and Instagram. Why do we have a Library Gnome? Oh, because five or six years ago, we did another travel-related theme, and we thought it would be fun to have an actual Travelocity gnome as part of our collection. So here he is, ready for his cameo in the "Hollywood Squares"-style grid of tasks for our teens.

It's this silly part of being a teen librarian that makes me happy. If it could all be this, instead of supervisors' meetings or nasty interchanges with grumpy grown-ups at the reference desk, my world would be a happier place!

Hopefully more illustrations before the weekend is through. If not, there's always next week.